In February 2019, ITMO University’s Faculty of Infocommunication Technologies hosted a career guidance hackathon. Among the winners were four students – Ilya Zakoulov, Maksim Pahmurin, Denis Arlakov, and Rostislav Nurdinov – who developed an app for a social project about urban orienteering. After the competition, the team decided to continue developing their app, now in collaboration with the team of that social project. Now, their multiplatform app has exited development and become a part of the project. More about the app, urban orienteering, and the boons of cooperation below. 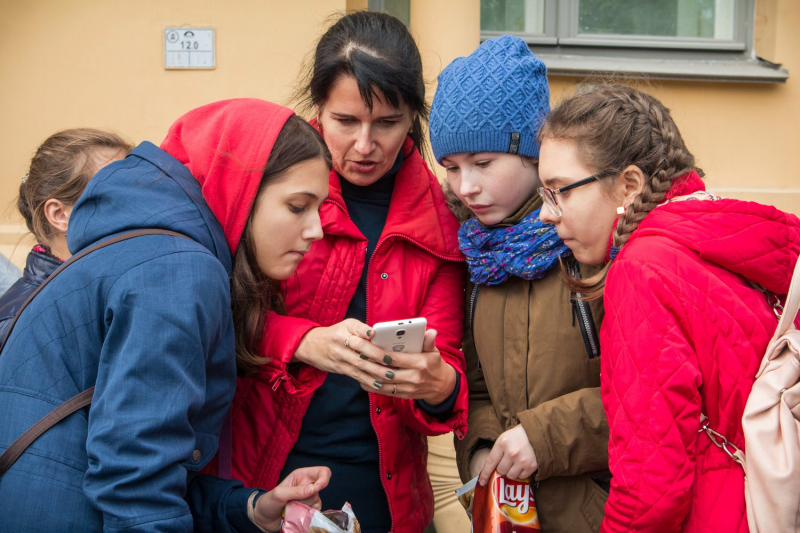 The Faculty of Infocommunication Technologies’ career guidance hackathon took place in February 2019. In order to take part in the contest, students needed to organize into teams of two to four members and pick the subject of their project. Some of the ideas and projects were put forth by the hackathon’s organizing team, but the students were free to suggest their own.

“We picked a project centered on urban orienteering because we felt it was something that people would actually use in the future. The case description said that urban orienteering is structured like a quest, meaning that the participants must solve a riddle, find a spot where a code is hidden, and discover the next clue. We developed a two-part system comprised of an Android app for the users and a web application for the organizers where they can create events and keep an eye on the teams. It was an interesting project to work on. To me, it was especially important because I was planning on doing an internship at Yandex. I knew that this project would make my chances much higher. And so it did. I spent all three months of summer interning at Yandex’s Sochi office. Overall, this has been a wonderful experience of working as a team with developers and the client,” shares Ilya Zakoulov, one of the development team’s members and a third-year student at the Faculty of Infocommunication Technologies.

Anna Ovsiannikova founded the social project Unknown St. Petersburg in 2016. Its premise is that users of all ages explore the city through solving puzzles and tasks. One “game” lasts some four hours and each team has its own route. Once each team has reached the finish line, the organizers tally their scores and award the winners.

“We tested the app this autumn during an orienteering event about the Siege of Leningrad. We only discovered one bug, which has since been fixed. The app has been very helpful: before, when we had major events for some 200 people, we’d have to rent an online service, which was very inconvenient. We’d had to adapt it for each event and communication with the developer was complicated, as they live in a different time zone and we couldn’t get in touch quickly. Finally, renting isn’t cheap, especially if you’re doing small-scale events. In those cases we would usually go with simple paper route cards. But playing with an app or with a paper card are totally different experiences. The app only shows you the current task and you can choose whether to grab a hint or not. With a route card, everything has to be there from the start. I think this app has made it easier for us to organize events, and for the players to play,” says Anna Ovsiannikova.

Unknown St. Petersburg is a social project without a permanent source of funding, and participation in its events is free. For that reason, its organizing team was unable to hire someone to develop an app. Working with ITMO students as part of the career guidance hackathon was the perfect solution.

“I was suggested to apply for the hackathon by its organizer Anton Govorov, an assistant at the Faculty of Infocommunication Technologies. I am very grateful to him and all staff members of the Faculty for the opportunity to be involved. If not for their help, the students wouldn’t have decided to continue with this project. Now, we have a mutually beneficial partnership: they give us a product that we couldn’t have bought, and we provide them with work experience and a valuable addition to their CVs,” says Anna Ovsiannikova.

According to Anna and Ilya, the development process had its share of challenges. The foremost goal was for the teams to hear and understand each other; but once that was achieved, their work continued without a hitch. Today, the app is actively used to organize events. The next event – a quest for school students slated for December 5 – will be run using the ITMO students’ app.