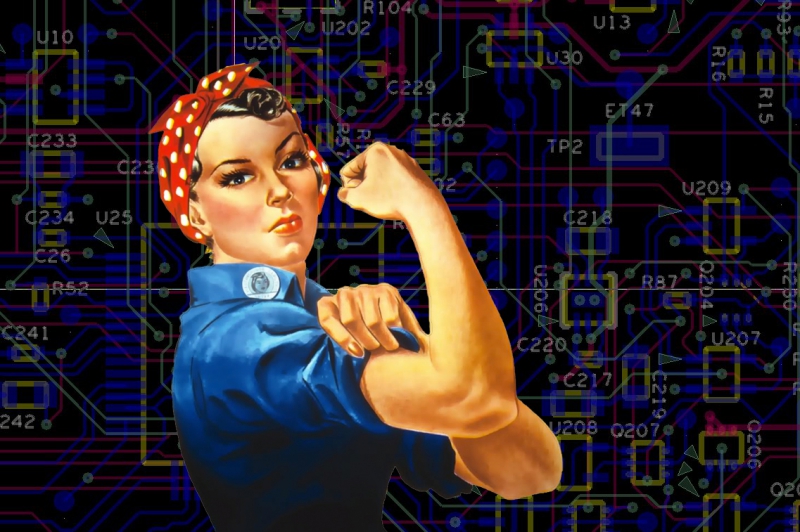 “The hackathon experience was an interesting one, as it was all-female: it’s not often that the ladies are given the lead, especially in tech. We all tried to help each other, even to those who were our direct competitors. Winning and awards are all nice, but what’s most important to us is to solve the task,” – shares participant Yulia Antonova.

All of the developed solutions, say the organizers, are viable and practical. On the second day teams were joined by technical, marketing and financial experts. They also conducted a competition analysis of the market to check what solutions are already present in the field.

“The teams were mixed. Girls from St. Petersburg and Moscow worked together, as we introduced them to each other remotely when the program started and sorted them into pairs. We did that so that, in addition to working with their mentors, they would also help and motivate each other,” – explains Tatiana Gaponenko, program coordinator and the head of ITMO’s Innovation Office. Participants of the hackathon at the IdealMachine accelerator

Case №1. The Petrovich company has asked the developers to create a “Plumber’s Tinder” – a simple and pleasant-to-use system for finding craftsmen. The company currently uses the “Petrovich Professionals’ Market” service that lets users find construction services providers. Users find a suitable individual or company and send them an offer. The teams were asked to create a service that would let users find repairmen, craftsmen and designer in the most efficient way.

The most effective solution was proposed by the “Brigade” team in the form of their Remontinder application. Users can describe their needs using photos and videos and even tag specific parts of the picture with detailed messages.

If someone’s apartment is being flooded or a tree fell on their house in a storm, they can tick the “URGENT!” box to skip through some of the steps. In terms of fixing up and redesigning their homes, people find it easier to say what they don’t like than what they do, explain the developers. Users can reject the things they don’t like and form a list of preferences by swiping right in the built-in “Game”. The system is secure, too. Before the workers and the clients are added to the database, they must pass a multi-step verification process using their passports. Such a system is comfortable not only to the clients, but the service providers as well. Now there’s no need to get into discussions about what materials to buy and where, as the system can automatically create an estimate list based on the client’s preferences. Services are paid for using credit cards and the payments are also sent to the workers’ cards.

Case №2. ITMO University asked the developers to create a system that would pick educational content according to the skills and requirements of each specific student and combine practice, theory, games, video content and the like. In the next ten to twenty years, due to influence of technology and new demands, the field of education will undergo a radical change, as part of which the traditional textbooks will be replaced by systems such as this one.

To create the “smart textbook”, the participants had to solve a number of issues: how the individualization mechanics will work, the basic principles of the project, how to create content, all in addition to the need to account for the interests of the customers and the educators.

The winning solution was that of the Unitbook team, who suggested using a chat-bot

“The task was a complex and a massive one, as we had to take into account the government regulations regarding textbooks. We also had to make sure it wasn’t boring. Studying is a lot like work, and we found a target audience that wants to find out how their preferred subjects at school will affect their choice of career in the future; how they would help pick a university program,” – explains developer Anna Aleshanova. Another team member, Alexandra Katushkova, tells how the textbook, which, at the outset, appeared to be a complex project, started to seem a lot more achievable even in the course of the two-day long hackathon.

The bare minimum for the project was the creation of a useful tool for young people who want to hone their skills in the field of natural sciences and mathematics, likely as a preparation for their application to a technical university.

“We decided that the important thing was that we spoke the same language as the user, that it wasn’t boring. A bot was very suitable for that purpose, as it could perform the complicated task of finding and analyzing the necessary data using a lively interface familiar to all modern people – a chat box,” – explains Ms. Katushkova.

A light-hearted chat session with the UnitBook bot will result in a list of links to educational content that reflects the user’s requirements. As this is an innovative project, the developers are planning to use a Markov chain to process the information given by the user and to pick and verify the content used in the educational process. Students can give feedback while they study, and, by testing the students on what they’ve learned and analyzing their activity, the system can fine-tune its performance. In future, the team plans to compare the educational content with teachers’ recommendations and to provide feedback to parents. Anyone can already try out the prototype by following @UnitBook_bot on Telegram.

Case №3. Bayer has asked the participants of the program to create a voting system that doesn’t require the voters to have internet access. The VoteVision team has suggested to solve the issue of time- and resource-consuming voting processes using computer vision. Developers have built a service made up of two components – a website and a mobile application. A user (the vote moderator) signs up for the website, creates a poll and submits it to the system. Then, the vote is initiated on the website and is assigned a unique identifier that can be entered in the mobile app. After that, the votes can be collected using pictures of audience members holding up colored cards that correspond to one of the voting options. Every time a photo is submitted to the server, a real-time graph is updated to reflect the votes.

“The server identifies the cards by the shape and color – the colors chosen will be “rare” so as not to mistake someone’s sweater for a vote. Most of the competition participants have posed with our cards. This was our first experience with computer vision and our having won in a fight with a machine is our biggest achievement at the hackathon,” – says team member Sofia Kareva.

What makes VoteVision different from other voting systems is that it can work in conditions when the voters don’t have internet access or are forbidden from using it – during tests, for example. The developers liked using computer vision so much that they have decided to develop their project further and introduce it to the market. The release version of VoteVision is planned to contain a feature that lets users compare voting data from polls taken on different days – at that point it would be more than a voting app and serve as a data analysis service, too. Developers also plan to let users compile their data into a single file and forward it to their email.

On September 30, the projects will be presented to experts, business angels and venture foundations who will choose projects to invest into. The event will be held at Skolkovo Technopark.