On November 25, the finals of the Student of the Year contest were held in the concert hall of St. Petersburg State University of Industrial Technologies and Design. This year, almost 200 St. Petersburg students submitted their applications in 12 nominations. A total of 36 made into the final round, including four ITMO University students. 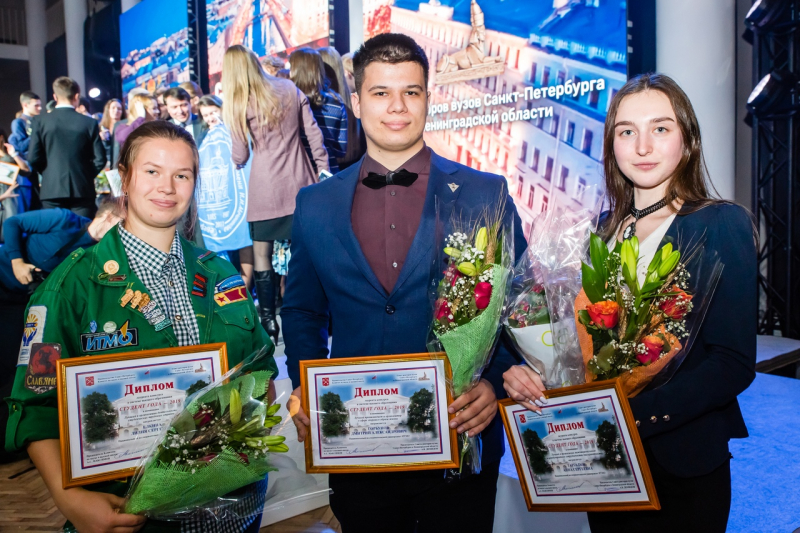 The Student of the Year contest was established in 2008 upon the initiative of St. Petersburg’s Committee for Science and Higher Education and the Rectors Board. Since then, many talented and motivated students have been awarded in 12 categories in such fields as science, sports, international collaboration, art, and student self-government.

In 2019, 194 students from 36 universities and St. Petersburg Interuniversity Student Campus took part in the contest. A total of 36 made it into the final round, including four students of ITMO University.

The final round of the Student of the Year contest was held in the concert hall of St. Petersburg State University of Industrial Technologies and Design. Participating as guests were Vice Governor of St. Petersburg Vladimir Knyaginin, rectors of St. Petersburg universities, as well as representatives of the city’s business and cultural communities.

“On the part of the Governor and Government of St. Petersburg, I am delighted to proffer our congratulations to everyone who today has been nominated for the title of Student of the Year. Remember, everything in this world belongs to those that strive for something, those who have the energy to achieve their goals. I hope that later on, you will be granted something else in addition to this award, that you will come up with important projects, will be able to bring your programs and plans to life, and that today’s prizes will become just the beginning of your journey. I congratulate you and all of us on this occasion, which I believe to be of significance to the city at large,” noted Vice Governor of St. Petersburg Vladimir Knyaginin.

The awards ceremony was accompanied by creative performances of dancers, singers, and cheerleaders.

Four ITMO students made it into the finals of the competition, being featured in the nominations “Best in Student Sport”, “Best in the Organization of Intercultural and International Cooperation (Tolerance)”, “Best in the Organization of Student Labor Union Activities”, and “Best Student Self-Government Leader in Dormitories”. Unfortunately, the students didn’t succeed in winning in their nominations. But according to them, making it into the final round is still a big achievement.

Anna Gargalyk, a fourth-year student at the Faculty of Food Biotechnologies and Engineering, laureate in the nomination “Organization of Intercultural and International Cooperation (Tolerance)”

This is my first time participating in this contest. To be honest, I didn’t expect that I would make it to the finals as there were lots of applications. So I’m very happy to gain the title of a laureate. I’m very grateful to Mika Nurisheva who welcomed me into the university's international collaboration activities a year ago — I wouldn’t make it without her. Being part of this work allowed me to communicate a lot with international students who come to our university, and, what is even more important, try my hand at organizing extracurricular projects.

Dmitry Gorbunov, a fourth-year student at the Faculty of Food Biotechnologies and Engineering, laureate in the nomination “Best in Student Sport”

For me, becoming a finalist was a huge surprise: I wasn’t expecting that outcome because I applied on the spur of the moment. I am grateful to Evgeny Raskin and Dmitry Rusanov, Head and Deputy Head of ITMO’s KronBars student sports club, for helping and motivating me to participate in this contest. I didn’t become in the least upset for not winning, I think that I’ll try to do that next year. I’ll just take on a more mindful approach: I’ll analyze my mistakes, achieve more sports victories and write a good application.

Liliya Elkina, a first-year Master’s student at the Faculty of Software Engineering and Computer Systems, laureate in the nomination “Best in the Organization of Student Labor Union Activities”

I learned about this competition from our student club mentor Alena Stepanishcheva and I’m very grateful to her for sharing this information with me. To be honest, I had no idea about how the final round would be organized: I was just told to come, and when I did I was genuinely surprised by the scale of the event. I’ve been participating in the student labor union movement since 2015: I just came to an assembly once and still am part of it to this day. I believe that student labor unions provide a perfect ground for self-fulfillment. It feels good to help people, participate in different events and learn something new. I believe that if I haven’t won, something just hasn’t worked out. It’s nice to make it into the list of the laureates anyway and be part of this celebration today.