History in Pictures: ITMO Through the Years

Did you know that the lavish building that is home to ITMO’s International Office was once… a church? Earlier on, we’ve taken you on visual tours of St. Petersburg’s white nights and a retrospective of Victory Day celebrations. This time, we’ll be taking a look at the one thing closest to our hearts: the history of ITMO University’s many academic buildings. With centuries of rich history between them, these architectural jewels are part of St. Petersburg’s cultural fabric – and so is our university. 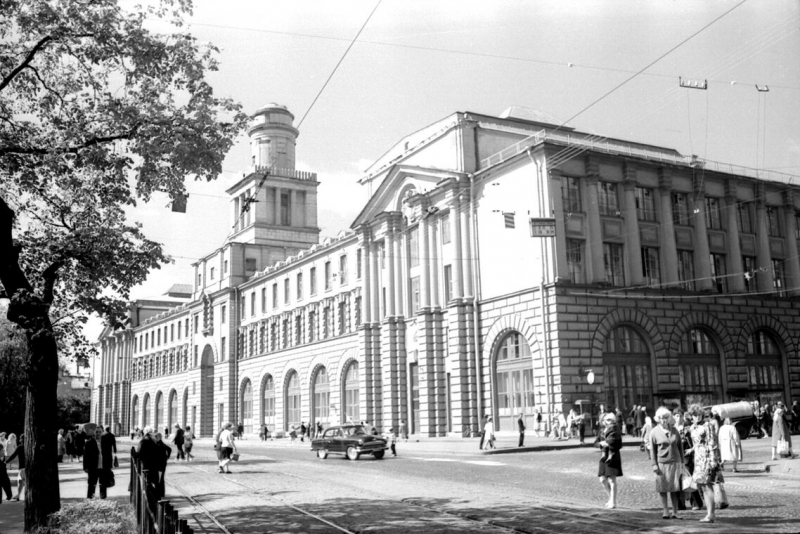 The University’s present-day main building on Kronverksky Prospekt 49 didn’t start out as such. Built in the 1910s in the classical style under the name 2nd House of City Institutions, its purpose was to provide new space for all sorts of public offices: from stores and a chamber of commerce to a small claims court and an auction hall.

After the Russian Revolution, it housed an employment office. It was only in 1956 that the building became the home of the then-LITMO (Leningrad Institute of Fine Mechanics and Optics).

Next door to Kronverksky 49 is the Sytniy Market. Founded in 1711, it is the city’s oldest market – and remains a common shopping destination for locals to this day.

In 1970, a new building on Sablinskaya Street 14 was constructed, completing the present-day look of ITMO’s main building.

Atop the building is a very special comms dish. In 1994, LITMO helped establish RUNNet (Russian University Network), a nationwide network that connects over 400 universities and research centers even today.

Although it is now an integral part of the university’s campus, the building complex on Lomonosova Street 9 is, in fact, a fairly recent addition to ITMO’s roster – the result of its 2015 merger with the University of Refrigeration and Food Processing Technologies.

The site itself, however, is deeply rooted in learning – as it’s been home to educational institutions for over two centuries. The Imperial Commercial College, established in the time of Catherine the Great, moved here in 1801.

In 1871, a new building, complete with its own church, was built. It closed down in 1919 and later became part of the University of Refrigeration; today, it is known to any ITMO student or employee as the home of the university’s International Office.

The nearby main building, a 70s addition to the neighborhood, stands on the site of the Imperial Commercial College’s garden; in 1941, during the Siege of Leningrad, newly-enlisted irregular troops came here for rifle training.

Today, the building complex on Lomonosova St. 9 is home to ITMO University’s School of Biotechnology and Cryogenic Systems, Faculty of Secure Information Technologies, the Institute of International Development and Partnership, the Student Services Office, and the KronBars student sports club.

Built in the 18th century for Russia’s first-ever bank, the building at Grivtsova Lane 14 can rightfully be considered the birthplace of ITMO as an institution. Indeed, it was here that the Petrograd College for Fine Mechanics and Optics moved in 1920 after splitting off from the Prince Nicholas Vocational School three years earlier.

Today, Grivtsova Lane 14-16 is home to the School of Photonics’ Faculty of Applied Optics and Faculty of Laser Photonics and Optoelectronics; read more about the School in our illustrated article.

Houses number 14 and 16 on the Birzhevaya Liniya got their start as part of the estate of Prince Alexander Menshikov in the 18th century. And it was here that in 1824 the merchant Pyotr Eliseyev, the founder of the Eliseyev dynasty (of the Eliseyev Emporium fame) began a wine-making business that became the foundation of his trade empire. In the 1860s, the Eliseyev brothers, Pyotr’s sons, came into ownership of the surrounding premises and moved their houses and offices here. At one point, it even housed a chocolate factory!

In the 1920s, the building was a residence for the staff of the nearby State Optical Institute (SOI). In 1932-1951, it was home to Sergey Vavilov, the renowned physicist, optical scientist, President of the USSR Academy of Sciences, and brother to famed geneticist Nikolai Vavilov.

Today, Birzhevaya Liniya 14-16 is home to ITMO University’s School of Translational Information Technologies, the Faculty of Physics and Engineering, the ITMO Technopark, and the upcoming Art.ITMO.Residency.