On May 9, 2020 we celebrate victory in the most horrifying war in the history of humanity, the Second World War, for the 75th time. Its history is compiled out of millions of stories about people, cities, villages, institutes, theaters, and museums. Together with the Historical Museum of ITMO University, we would like to share stories about our heroes, as well as challenges and triumphs that our university went through during those four years. 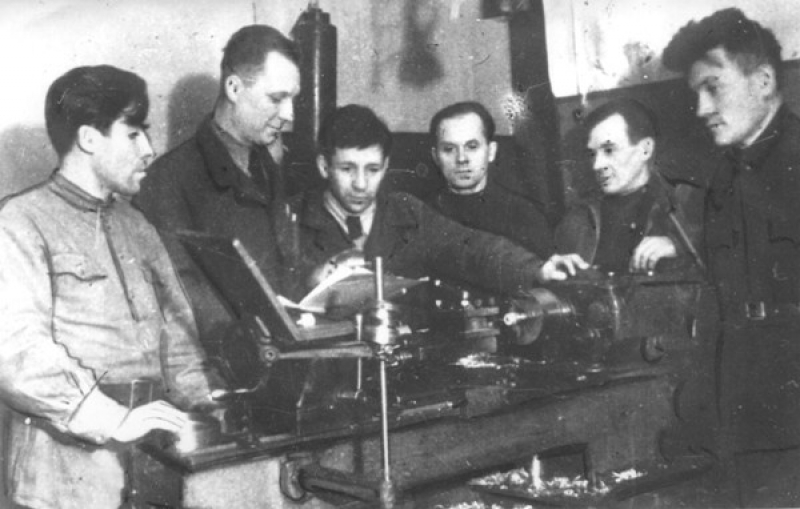 LITMO at work during the Siege of Leningrad. Credit: Historical Museum of ITMO University

For students and professors at Leningrad Institute of Precise Mechanics and Optics (ITMO’s former name), the summer of 1941 began as usual. Everyone was taking exams, completing their theses, and waiting for summer vacation. However, news of an impending war reached Demidova Lane, 10 (nowadays called Grivtsova Lane, 14-16), the only campus of LITMO at the time.

On June 21, a day before the war began, Sergei Shikanov, the head of the university, made an order to prepare a bomb shelter, so that university’s students and staff could be protected in case of an emergency.

“The classes continued despite the beginning of the war,” says Nadezhda Maltseva, head of the Historical Museum of ITMO University. “So, on June 25, 31 students of the Faculty of Precision Mechanics defended their theses. On July 7, classes were resumed. On August 1, 1941, the second-year and third-year students resumed their studies, too. They needed to train students so that they could begin to work as engineers. That’s basically what happened. Most of the 1941 graduates were evacuated to Kazan and Yoshkar-Ola to work at optical factories. They developed new optical-mechanical devices on the basis of the inventions by the State Optical Institute and under the guidance of Sergei Ivanovich Vavilov.”

During the first days of war, 189 students and 85 staff members of the university volunteered to join the army and People’s Volunteer Corps. As soon as the middle of summer, German troops had arrived in the Leningrad region.

“Among those who went to the front lines and came back to LITMO after the war was over were PhD students of 1941 Grigorii Gorodinskii, Vladimir Khvalovskii, and Georgii Shelinskii,” says Nadezhda Maltseva. “Up to August (1941) students were mostly preparing the area for battles. David Galpern, one of the soldiers of the fourth division of Oktyabrsky district, Leningrad (the division LITMO students were a part of), remembers the first battle that took place near the Veimarn station in the Western part of the Leningrad region. The second massive and extremely difficult battle took place near Luga – Vladimir Khvalovsky told us about this one. They had to face the German troops hand to hand near the Krasnaya Zvezda sovkhoz. Those were very hard battles mentally, too, as our soldiers constantly had to retreat.”

Survivors of the first battles were then sent into different divisions. Meanwhile, lots of people kept volunteering to go to the front lines.

In 1942 the university was evacuated. By that time, the number of the university’s volunteers reached up to 394, many of whom were either wounded or killed. More than 200 soldiers from LITMO were awarded medals. They kept fighting for the common good, even though they were separated from each other.

On September 8, 1941, Leningrad was surrounded by the German troops, and the Siege of Leningrad began. The city administration decided that universities should continue to function in evacuation to teach specialists in the arms industry. Even while evacuation was being arranged, LITMO kept functioning.

Problems with provision kept getting worse day by day, as there was not much food stored in the city itself – most of it was imported. It was getting harder and harder to exchange stamps for food. A black market began to appear, but not everyone had resources to use it.

“In LITMO there was a cafeteria where university’s staff, students, and those in need who lived nearby could eat in exchange for ration stamps. This cafeteria saved many lives,” tells Nadezhda Maltseva. “A first-aid post was also arranged in the university’s building, so that wounded and ill patients could be taken care of.”

However, people kept getting weaker. Hunger made even the most basic tasks impossible to do. For example, Prof. Sukhoparov once tripped, and it almost cost him his life.

“People remember a story about how Serafim Sukhoparov, then a student of LITMO, was walking on a bridge in winter, tripped and fell,” tells Nadezhda Maltseva. “He was so exhausted that he couldn’t stand up again. A car that was moving through the city collecting dead bodies picked him up and threw him in the trunk with dead bodies of killed and deceased people. Only later they realized that he was alive and took care of him.”

In the beginning of spring 1942, LITMO employees were divided. Some of the specialists, including opticians, remained in Leningrad to work at the military repair facility for the Leningrad front, whereas others were evacuated.

During the Siege, several departments were operating at this facility. At one of them, optical devices such as stereoscopic telescopes, binoculars, scopes and rangefinders were produced, repaired, and adjusted. Since 1942 these tasks had been managed by Georgii Pogarev, a PhD student, and his wife Marina. They were arranging the work process during the war, and also took care of the university’s building.

“Marina Pogareva arranged around-the-clock shifts to watch over the ovens. She herself was bandaging and feeding the wounded, and also helped her husband, Georgy Pogarev, to manage the work at the repair facility,” says the head of ITMO University’s Museum. “These events were described by Liliia Smirnova, facility’s turner and Komsomol organizer. She was exchanging letters with frontline soldiers, who received production manufactured by this repair facility. Soldiers of regiment №37521 sent her a picture of themselves in June, 1943, giving thanks to the workers for the optical scopes they were gifted. Semen Tsukkerman, a professor of LITMO, was also working at the facility. He traveled to the front lines as a “professor of the second anti-aircraft regiment” to adjust the optical scopes. In 1943 he was awarded a Medal of Honor for equipment development.”

Evacuation of the university took place in 1942. Laboratory equipment, documents, and personal files were also transported. At first, the destination was Mineralnye Vody.

“Everyone was extremely exhausted,” says Nadezhda Maltseva. “However, once the students reached Mineralnye Vody, they began to look for jobs in order to gain some food and support themselves.”

However, the German troops invaded the Caucasus, and Mineralny Vody could be occupied, so LITMO university set on the road again, this time to Cherepanovo in Novosibirsk Region, Siberia. They had to walk for dozens of kilometers, look for cars, and catch passing trains. It was an extremely difficult trip, and not everyone managed to complete it. Mineralnye Vody was occupied, some of those who couldn’t leave were killed or sent to labour camps.

The path to Novosibirsk took months. Only in 1943 the classes were arranged again at the new place.

January 15, 1943 was the first day of classes after a long break. By that time, students and professors were accommodated in a dormitory. In the summer of 1943, the university even admitted new students, mostly graduates of local schools.

“In our museum, there is LITMO’s leaflet printed in Cherepanovo in 1943. It describes in detail what the institute was like at that time, what faculties and departments there were, who were the professors, and what majors there were. Many of the school graduates, mostly girls or guys who were too young to go to the front lines, were admitted,” says Nadezhda Maltseva.

However, not only the classes needed to be arranged, but also the commodities: a laundry, a cafeteria, a first-aid post. Moreover, they were growing food to help those who stayed at Leningrad. There was only one car and one horse available for all the moving.

“A unique person, Grigorii Sheremet, should be mentioned here. He was a student back then, and became the deputy director of the Institute for Administrative and Economic Work,” says Nadezhda Maltseva. “He was responsible for fuel supply, agricultural work, laundry, and helping students who came to Siberia, often without clothes, shoes and the necessities. After the war and graduation, he worked for many years as Vice Rector for Administrative and Economic Work.”

Still, this difficult life in Siberia was good enough for the students. Many of them wrote to their fathers fighting at the front lines that there’s enough food and they are in a much better state than when they were leaving Leningrad in 1942.

LITMO had been functioning in Siberia for about a year, when good news came from Leningrad: it was fully freed from the Siege. It meant that students and staff could come back home. However, it still wasn’t an easy process. They needed to arrange a route, get licenses and permissions, and find means of transportation. Head of LITMO, Sergei Shikanov was helping each person individually – sometimes it was hard to get permission to relocate. It took the university eight months to move back to Leningrad.

The university’s building was partially damaged. It wasn’t hit by the artillery directly, but still the plaster fell off and the windows were broken because of shells that exploded nearby. University’s staff that remained in Leningrad were forced to use the furniture and even parquet as firewood to warm themselves.

“One girl was admitted to our university in Siberia and from there moved to Leningrad,” says Nadezhda Maltseva. “At first she was a construction worker. She plastered the wall of the university by hanging in a building cradle. She called it “being in limbo”. Unfortunately, due to family circumstances she couldn’t graduate from LITMO, and completed her degree in another university.”

In 1945, the first postwar admission to LITMO took place. Many front-line soldiers also returned to their university despite all the challenges. At that time, studying was not tuition-free and, even though those who had been demobilized from the army received a tuition waiver, many had to quit their studies: they had to work in order to feed themselves and their families, and rebuild the city. First-year students of 1945 who managed to finish their studies graduated in 1951. However, regardless of their fate, all these people became a part of the history of Leningrad optical science and the optical-mechanical industry, and ITMO University remains their successor.

We also would like to add that you can read about the life of a family from Leningrad during the wartime in this blog (in Russian) by Nataliia Gorlushkina, associate professor at the Faculty of Infocommunication Technologies, who writes about her father, Nikolai Gorlushkin, a hero of the Second World War.

Even though due to the pandemic the Immortal Regiment won’t take place on the streets of our cities, thousands have shared their family stories online. ITMO University developed an application for an online Immortal Regiment. Thanks to this app, anyone can tell their story and place it on an interactive map. As of now, users of 64 countries and 790 cities have taken part.