Participants of the event attended lectures by industry experts and designed assignments for each other. For example, some were tasked with creating a bot that would emulate the classic authors of Russian literature, while others – a bot capable of identifying the language used in online comments. 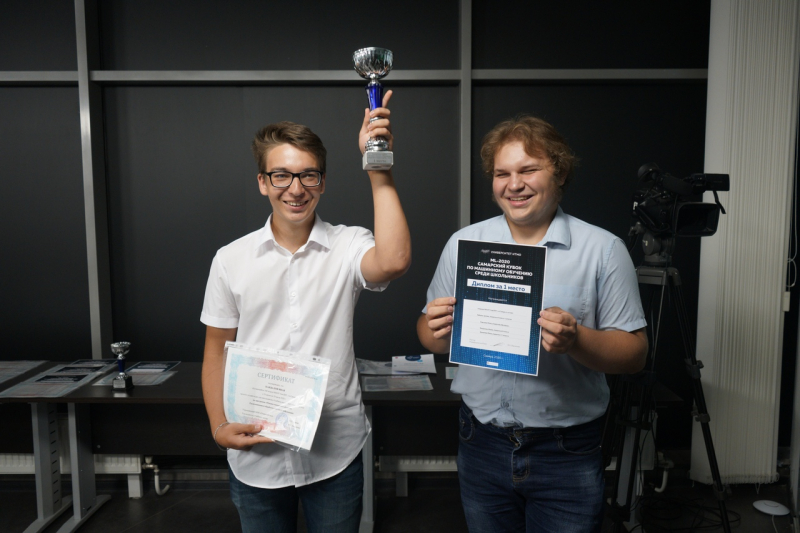 The Machine Learning Cup was organized by the Sergei Korolev Samara Technical Lyceum, the Samara-based company Open Code, and ITMO University. As the event’s organizing team noted, the idea behind the competition is that it is supported by three stakeholders interested in the training of professionals: a school that trains future applicants, a university that allows them to become specialists, and an IT company that works and grows thanks to its quality staff.

“The foundation for this relationship was laid in 2014. Then, Samara Oblast’s Department of IT and Communications and our company joined forces on the project Social Elevator, which was carried out at the Samara Lyceum of Information Technologies (SLIT). We introduced the students to actual work environments and told them about the most relevant areas of our industry. In 2015, we collaborated with ITMO University on the first session of the school students’ section of the Congress of Young Scientists (CYS), which involved the students of both the Sergei Korolev Samara Technical Lyceum and SLIT. In 2016, Open Code, both of the lyceums, and ITMO University signed a trilateral partnership agreement,” says Irina Kiforenko, head of Open Code’s educational center.

The Machine Learning Cup, conducted in late July, was the final challenge for its participants, who had also taken part in two previous educational stages. The event was devised by the Sergei Korolev Samara Technical Lyceum, which, along with Open Code, handled most of the organizational tasks.

“It is important to note that the initiative came from our partners: the Sergei Korolev Samara Technical Lyceum and Open Code. They promoted it, designed it, and did the lion’s share of the work. That’s important because with such events, universities usually take the initiative, but it was different this time. We’re grateful to our colleagues for their efforts and the work they did with school students, which resulted in worthwhile results,” says Anton Suprun, deputy head of the Faculty of Infocommunication Technologies at ITMO University.

The Machine Learning Cup took place online over the course of six weeks. 53 students from the Korolev  Lyceum, SLIT, the Perspektiva gymnasium, and the Samara Regional Center for Gifted Children took part in the first stage of the competition.

29 participants passed into the second stage. The staff of ITMO University, Samara State Technical University, and Open Code, as well as teachers from Korolev Lyceum and SLIT were involved in the development of the event’s program and conducted the classes and competitions.

Among the project’s authors is Anton Ivashchenko, a staff member at Open Code and a professor at Samara State Technical University and ITMO University.

“We wanted to create an event that would be interesting to school students. Today, the aspects of mathematics that deal with machine learning, neural networks, and text recognition are widely represented in educational literature. For that reason, kids at some of the more advanced schools learn Python and solve applied problems. We chose machine learning and text recognition to show how machine learning, which some might see as abstract, really works. We invited Arkadiy Krivosheev, a staff member at Open Code who works on text recognition in applications, to serve as a specialist for the event’s first round,” says Anton Ivashchenko.

According to Olga Kovalenko, deputy director for research at the Korolev Lyceum, the students showed initiative by expressing a desire to continue their studies. The organizing team welcomed them, providing the students with more independence in the second stage. Before the final stage, the participants were tasked with designing assignments for each other. For instance, to develop a bot that writes poems in the style of classic Russian authors, or a bot capable of identifying the language in which a comment has been written online. Some tasks turned out to be so complex that none of the teams were able to solve them within the week.

Machine Learning Cup wasn’t designed as an online event, so in the future, its creators plan to conduct it in blended format or fully offline.

“In-person communication is necessary. For comparison: how was the Congress of Young Scientists held? Before, we had an awards ceremony with kind words, diplomas, and pizza – and the great joy that the kids felt on the final day. This year, it came to a close, people said their thanks, the winners were named, and everyone said goodbye. There was a lack of emotion, which is necessary for events of this kind,” explains Irina Kiforenko, head of Open Code’s educational center.

Anton Ivashchenko, too, supported the notion of direct communication, explaining that it is in the interests of students, university staff, and industry members. In the case of the former, students get to see how specialists work in real life; as for universities and companies, these events allow them to keep an eye on future specialists and establish relationships with them.

“It’s important to us that universities lay the groundwork for digitalization and application of innovative technologies. Today, artificial intelligence and big data are a hot topic, which is why it’s important to clarify some things to future applicants. We should explain to them that it is, first and foremost, a field of science; that you need to be good at mathematics to work in this field; and that machine learning is a tool. Events such as this aren’t about a specific niche; they are about expanding the kids’ perception and helping them find their way,” adds Anton Ivashchenko.

Members of the organizing team have noted that, despite the many challenges faced by the field of education in the spring and summer of 2020, the Samara School Students’ Machine Learning Cup was a success. It has demonstrated good results, which means the project will develop on a regular basis in the future.