Artificial Meat and What It’s All About: 10 Top Questions

Some scientists say that artificial meat could be humanity’s salvation from hunger – but then why isn’t it being produced at an industrial scale? We dig into the subject, guided by Alexander Ishevsky, a professor at ITMO University’s Faculty of Biotechnologies. 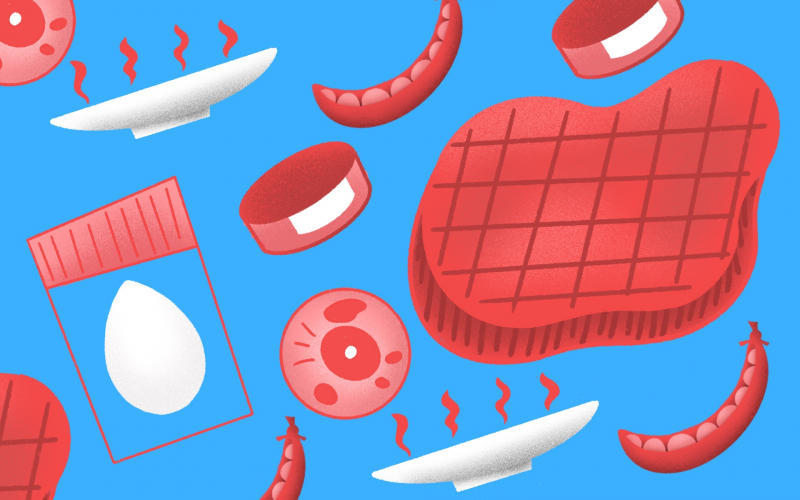 Illustrations by Dmitry Lisovsky for ITMO.NEWS

What is artificial meat?

Artificial meat is meat that’s been grown in lab conditions from a live cell that’s placed within a reactor. Think of a chicken egg; that’s nature’s perfect reactor. Its shell holds calcium for bones, the whites contain protein for muscle tissue, and the yolk provides a fatty base for nerve cells. This is a lot like what happens in a bioreactor. Even though it’s a complicated process, there are already special nutritious environments and growing modes that will someday allow us to grow meat on a massive scale.

How is it made?

For now, the precise component list of artificial meat isn’t known, but the technology is quite simple at first glance: specialists take an active cell and create conditions in which it can grow on its own. Usually, this is done using an embryonic stem cell.

Does its production harm animals?

No, even though source cells do come from animals. They’re simply sedated for a while in order to retrieve a sample of muscle tissue, but in the end there’s no harm done.

Are there any health benefits?

In the sense that it’s genuine protein. All eight of the essential amino acids that aren’t produced by our bodies are found there in various amounts.

Not unlike real meat. Besides, the existing [Russian] legislation dictates that packaging must describe the components of the product; based on that, a package of artificial meat would state that it’s made of beef – as it’s grown from a live cell.

Could you make a steak with it?

Probably not, but you could make a burger. The thing is, so far artificial meat has only been grown in the form of “clumps” of hamburger meat and not a specific organ or body part. We all know that a steak is tissue, while reactor-grown meat forms into blobs and doesn’t “want” to assume the secondary structure of protein, which is tissue. The matter at hand right now is to make it properly grow in the first place.

Could artificial meat become a substitute for the real thing?

That’s a prospect for the future. The agroindustrial complex has reached its limit. It cannot expand further due to the lack of space and water; besides, the by-products of the industry are having a severe impact on the environment. We’ve simply got no other option. Population growth has entered the geometric stage. Today, the agroindustrial complex can feed nine or ten billion people, and there are already almost 7.6 billion people on Earth. Right now, 85% of the population doesn’t get enough animal protein because 15% get almost all of it – and throw away half.

What advantages does it have?

Artificial meat doesn’t require much in terms of space or water; it doesn’t result in any environmental pollution. It’ll also be cheaper than the real thing, as there would be no costs associated with storage, transportation, or feed. Artificial meat would only need a nutritional solution. There is also an obvious advantage for those who don’t tolerate the killing of animals.

What are its drawbacks?

For now, there’s plenty. It still doesn’t have much taste, structure, or smell. Real meat is a complex product and the result of the complex process of autolysis. During that process, internal enzymes enrich meat with taste, color, and smell.

In what other ways can we replace beef, pork, chicken, and other conventional types of meat?

There are two. The first concerns the so-called “neo-protein products” based on plant protein, mainly sourced from legumes, such as soy. But they aren’t a good substitute in terms of amino acid make-up and are somewhat costly. The other solution is alternative protein, such as that of insects. This refers to any protein that may be grown and produced outside of the agroindustrial complex. Insects contain a great deal of genuine protein, but it must be kept in mind that, in large doses, it acts like a powerful allergen. Then, for instance, locusts are approximately 50% protein, but require just as much water and plant feed as cows.