Picture of the Week: Luminescent Image of Carbon Dot Layer

For over 15 years, scientists have been exploring the nature of carbon dot emission, and this image illustrates the relationship between the emission intensity and the concentration of particles in the dry layer. 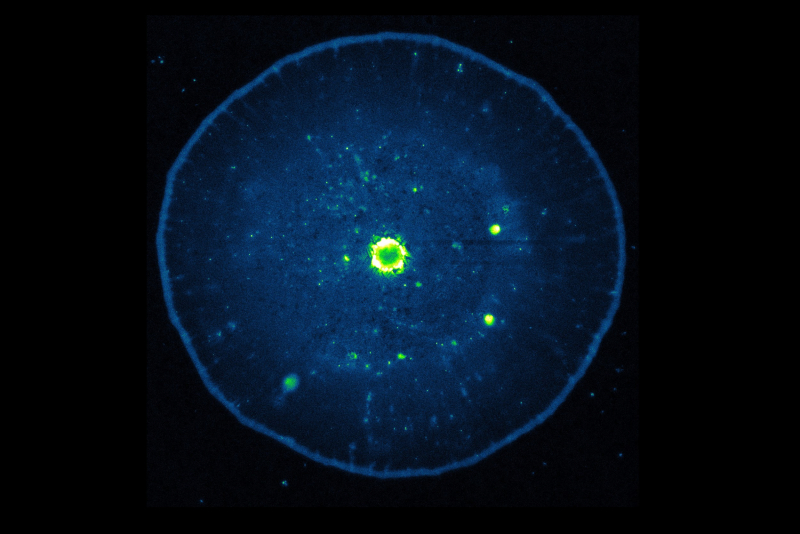 Looking like an image of a jellyfish, the photo captures a luminescent thin layer of carbon dots. Here, you can observe the concentration gradient of carbon dots from the center of the drop to its edges. The concentration in the center is significantly higher than the average for the area, while the edges of the drop are bordered by an increased concentration. The luminescent image makes it possible to analyze the distribution of the nanomaterial on the substrate; in this case, the distribution is nonuniform.

Carbon dots are a relatively new class of carbon-based nanomaterials. Since their discovery in 2004, researchers have been trying to understand the mechanism of carbon dot luminescence. But as the optical properties of carbon dots depend on their synthesis conditions (chemical reagents, temperature, and pressure), there is no unified physical model that can describe the main mechanisms of luminescence of this class. The reason being that certain synthesis parameters affect the degree of carbonization and the type of luminescent centers.

This is a luminescent image – the blue and green-yellow areas correspond to the luminescence of objects emitting light in the visible spectrum.

Why do we see different emissions? Could these be various fluorophores on the same substrate? Not really, all that emission was caused by the luminescence layer formed from carbon dots.

The observed effect illustrates one of the distinguishing characteristics between the luminescence of carbon dots and organic luminophores (luminophores are substances capable of converting the energy they absorb into light (luminescence) – Ed.), as well as semiconductor quantum dots.

This effect is associated with the heavy reliance of the emission energy on the concentration of carbon dots in a sample, in other words, on the average distances between adjacent dots. In the region with a high concentration, the luminescence peaks in a long-wavelength shift relative to the regions in the sample with a lower concentration.

The nature of this effect has not yet been fully explored, since energy transfer, for example, according to the Förster resonance mechanism, can’t lead to such a strong dependence of the luminescence position of nanoparticles on their local concentration in a sample.

Researchers are currently performing a comprehensive theoretical, and experimental study of this class of luminescent nanoparticles. Their aim is to identify the patterns of the luminescent properties of carbon dots, which would unify the synthesis process and allow massive use of carbon dots in photovoltaic systems, light-emitting devices, bioimaging, and theranostics of socially significant diseases.

This image was obtained during an experiment. The scientists applied a layer of an aqueous solution with a high concentration of carbon dots onto a cover glass, where it dried out at room temperature. After the evaporation of water, the sample was examined with the Zeiss LSM 710 laser scanning confocal microscope (Germany). The image was obtained with the use of a 20x/0.75 lens, and a 405 nm diode laser. The spectrally resolved image of the drop of carbon dots was recorded using a 32-channel photodetector.