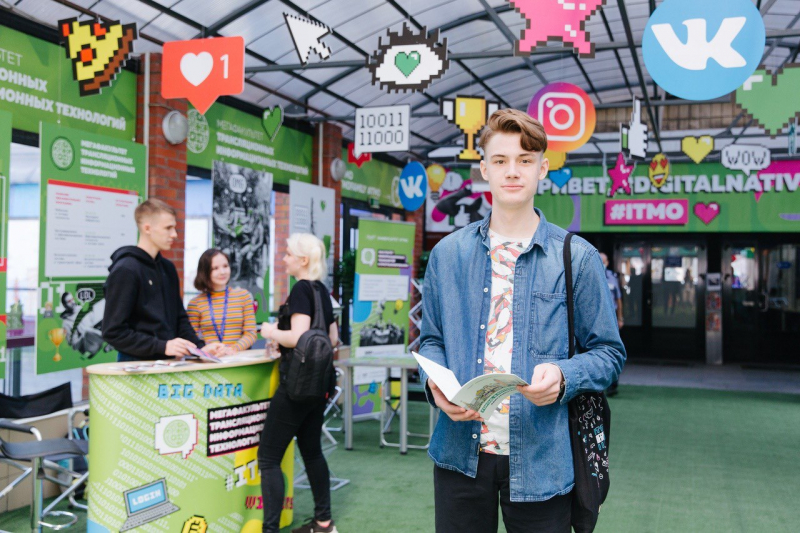 More than 1,100 students have been admitted tuition-free with an average Unified State Exam (USE) subject score of 93.1, which is 0.4 points higher than last year’s figure. 10 of these students were enrolled through the state-sponsored specialist training program for the high-tech industry with an average 84.9 USE score.

Almost 600 students were enrolled in fee-based positions with an average subject score of 78.5.

This year, ITMO.STARS (in Russian) was held again – a competition of applicants’ unique achievements that helps talented and motivated students to enroll at ITMO University despite insufficient exam scores (the only requirement being that they reach minimum points). The competition received 184 applications from different regions of Russia. 15 students were chosen as winners after sending in impressive portfolios and passing an interview with the university’s professors.

More than 4,400 prospective students have applied for Master’s programs at ITMO University. Among the most popular were Game Development Technologies, Urban Planning and Design, Innovative Economics and Industry Regulation, Web Technologies, and Digital Transformation of Organizations. The ratio of applications per position for these programs surpassed 3.

A total of 2,677 students were enrolled on a tuition-free basis, 70% of them are graduates of other universities.

172 students were enrolled in fee-based positions (all admission orders will be published later).

742 students will start their Master’s program without entrance exams: these are winners of portfolio and report competitions, winners and medalists of the “I am a Professional” or the NTI olympiads, “It's Your Call!” winter school, as well as a whole range of competitions held at ITMO University.

More than 890 university graduates decided to pursue the highest level of education at ITMO University. As per the results of the campaign, more than 300 new students will begin their studies this fall, 266 of them will be on tuition-free positions.

Over 40 young scientists from Germany, Italy, China, Yemen, Tanzania, and other countries will study as part of the government-sponsored specialist training program, and another 16 have enrolled in fee-based positions.

The ratio of applicants for all programs was more than 3 people per position. Among the most popular research areas were Industrial Ecology and Biotechnologies, Physics and Astronomy, and Computer Science and Engineering. Official documents of the students’ enrollment in PhD programs are published here.

507 international students have enrolled in Master’s programs, including winners of various competitions and the International Open Doors Russian Scholarship Project.

The selection and enrollment of candidates to study in Russia continue within the quota established by the Russian Government. Students from Vietnam, Syria, China, Mongolia, Greece, India, Germany, Ecuador, and other countries will study at ITMO University under the referral of the Russian Ministry of Science and Higher Education – partly online and partly offline.

International applicants who'd like to improve their level of proficiency in the Russian language and prepare for studies at Russia's higher education institutions can apply to ITMO University's Foundation Program. This year, students of the program are also provided with training using distance learning technologies.

International students who arrive in Russia will be able to start offline studies after completing a 14-day self-isolation from the day of arrival and in case of a negative test result for COVID-19. They will be able to spend a period of self-isolation at ITMO University dormitories. Those unable to enter the country can access the training materials online.

International students arriving from regions with a difficult epidemiological situation, in order to start their studies, also need to get tested for COVID-19.

The new academic year at ITMO University begins on September 1, 2020. Classes will take place in the hybrid format – both online and offline. You can find more information about this academic year here and here.

Visit ITMO Enter to find all the information about navigation at the university, study features, international opportunities, and much more.