JavaScript, С, PHP and Python: ITMO’s Master’s Students on How to Create a Website in 45 Minutes

Which programming languages one should learn to create a full-fledged website? How to do the design layout justice? And how to combine all that in such a way, that the website will look great on both a PC and a mobile device? Master's students from ITMO's Department of Computer Engineering and Design can do all the graphics and coding in just 45 minutes, and can well explain a novice web-developer how to create a modern adaptive website from scratch. What can one learn in a short time, and how to choose "your" programming language — read this and more in our article! 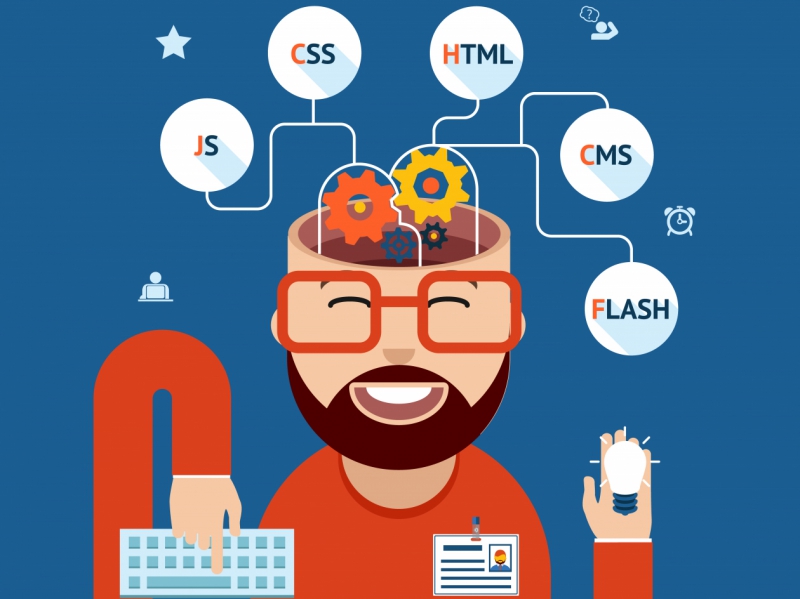 Be it a website for a web-studio or a coffee shop, a resource on climbing Everest or diving — the "Website in 45 Minutes" project's own page already has 19 educational screencasts for it. In some 45 minutes, anyone can learn how to create a modern adaptive resource for different purposes, be it a non-profit organization or a site for a developing business. The lesson's authors are Master's students from ITMO University's Department of Computer Engineering and Design. Many of them already work as full-fledged developers. They started sharing their experience and making educational screencasts last semester as part of a class assignment, which later grew into an independent project.

"In 2016, as result of high competition, we got a whole team of "star" students for our Web-Technologies program. Many of our students already worked as web-developers, so we wanted to bring something new to the curriculum. So, we proposed them to make a screencast where they'll show how to create a website in only 45 minutes, i.e. how to create an adaptive website from the scratch", shares Dmitry Shuklin, head of the Department of Computer Engineering and Design. Firstly, it is the standard academic time unit we know since school, explains Dmitry Shuklin; secondly, the team decided to avoid long 2-hour screencasts, as few watch them to the end.

About 40 Master's students took part in the project; in the end, 19 best works were chosen. Yet, it took some time before this became an independent project — this idea was proposed by the department's student Dmitry Verkhoumov. He was the one to create the "Website in 45 Minutes" platform which united everything the students created. The project's main ideas are the popularization of web technologies, structuring of fragmented knowledge and comprehensible explanation of technology, even for those who are new to web development.

"At first, when one is new to creating websites, he does not even know what to start with, and how the whole process goes. Yet, if you watch our videos, you will see that it is not as complex as it may seem. You will see how to code, how to do the design. That is why one of the first tasks of our project was to show the whole process, for the novice developers to see what they should start with and what they need to learn", notes Dmitry Verkhoumov. How to work with it

As opposed to the many free website builders that one can use to create a simple site based on simple templates, the project gives a lot more room for creativity. The user can choose which technology to learn, be it JavaScript or Python. To do this, he just has to set particular search parameters.

"Who will find the website useful? Firstly, those who have some basic knowledge of web-programming — for instance, know html, css — the fundamentals — and have heard of the more complex things, yet do not know much about these technologies or how to use them. We have many videos on it, so one can learn themany ways of using different technologies for solving common tasks. Each user can conduct his own analysis and decide which approach he likes most", adds Dmitry Shuklin. JQuery, React and Babel — which will soon be forgotten?

The technologies used for creating websites and applications change even faster than newer versions of iPhone appear. And if yesterday, employers wanted projects on JQuery, today you may well hear that JQuery is something outdated, and everyone uses React, explains Ilya Gosudarev, Research Associate at the Department of Computer Engineering and Design. This is why projects like the "Website in 45 Minutes" are not just educational resources, but also play the role of some "historians" of web development.

"Yesterday, you’d hear that the best practices are ones, today — others, and tomorrow they'll be different again. For example, we now use Angular 2, and know that soon, they'll release Angular 4. Or you now use JavaScript, and then they tell you to work with TypeScript. And you know that the situation will change again next year, adds Ilya Gosudarev. That is why it would be good to remember how it was done a year before, and compare. This project will also be great for future researchers that will be able to use this chronology. And, surely, it is great practice for students, many of which are already acting developers. Here, they can learn new things and exchange useful experience.

By the way, the arguments about which programming language is best for development are still at large. So as to understand, what technologies are popular now and will stay so in the future, many companies make their own ratings, using such sources as specialized forums, applications for programmers and even social networks. Each makes its own top-five list. For instance, last year the RedMonk company named JavaScript, Java, PHP, Python and C# as leaders, and IEEE Spectrum — C, Java, Python, C++ and R (the latter was chosen due its demand in working with Big Data and the growing interest to Big Data in general). To further systematize the data and approaches, "Website in 45 Minutes" authors are planning to continue with the project. In future, they will not only add new lessons, but also monitor the evolution of web technologies.

"There is a monstrous ecosystem around JavaScript, an immense number of frameworks. Just try looking at the number of posts like "How it’s like — working with JavaScript in 2016" on websites for programmers, and now it's 2017 — believe me, there's multitude of various information. How can one make sense of it all, especially if he's a novice? So the best practice we've taken up is studying the common standard in web development, its chronology. We work with a single-language platform, but compare it to different ones as well. This is a major analytical work that we will carry on", — concludes Ilya Gosudarev.