A team of scientists from ITMO University have used DNA molecules to develop a high-performance nanobot that detects pathogens. Its effectiveness has been tested on COVID-19, but the technology may be adapted to seek out other viruses. Unlike PCR testing, this method does not require costly reagents, complex equipment, or trained personnel while demonstrating the same level of accuracy. 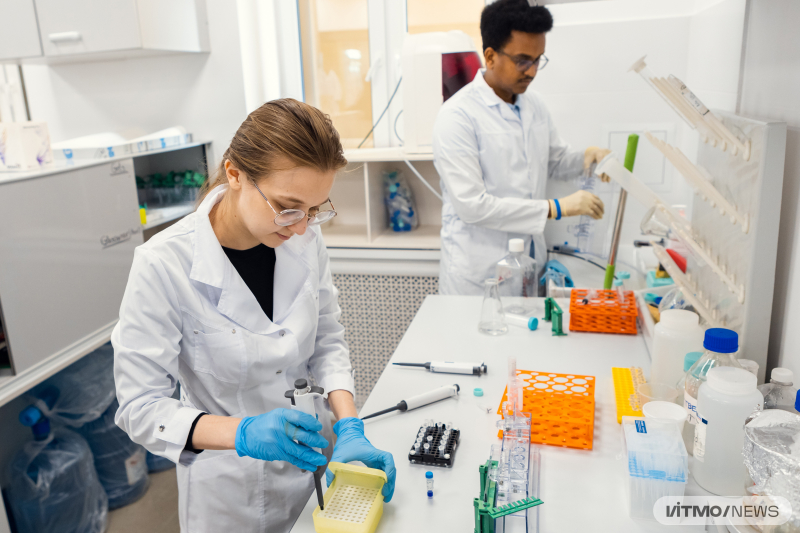 Researchers at the frontier laboratory where the study was carried out. Photo by Dmitry Grigoryev / ITMO.NEWS

PCR testing, despite its high level of accuracy in diagnosing infectious diseases, has its own limitations. For one, sample analysis can only be conducted in lab conditions using expensive equipment. Store-bought express tests, on the other hand, can be easily used at home but are quite unreliable. For instance, they produce false negative results in the case of low concentration of a virus.

Researchers from ITMO University’s ChemBio Cluster set out to create a medical detection system that would be as easy to use as express tests, but closer to the PCR in terms of accuracy. They succeeded in creating a DNA molecule-based nanobot capable of detecting viruses in samples taken from areas such as inside the human nose.

Each bot consists of 215 nucleotides (elementary structural units of DNA and RNA), as well as four special “levers,” referred to by the scientists as hands. To analyze a sample, it is combined with a solution that contains the DNA system and a special luminescent substance that helps visualize the results. The robot can detect a virus even at low concentration levels.

The algorithm for “catching” viral RNA is as follows: the DNA bot comes into contact with nucleic acid, turns it around using its “hands,” and attaches itself to it. These actions induce the breaking of the substrate, a process that can be tracked using a spectrometer through the appearance of a fluorescent signal. If the sample does not contain any viral DNA, no reaction or signal will occur.

“RNA has a complex twisted structure that cannot be unspooled using just two “hands.” Four such appendages, as our experiments with COVID-19 RNA have shown, are much more effective and quick at doing that. The method works at room temperature, too, and does not require costly reagents or equipment,” explains Ahmed Eldeeb, the paper’s lead author and a PhD student at the ChemBio Cluster.

The next stage of the project will be to adapt the developed method into an accessible test system for at-home use, as well as train the bots to recognize other viruses and oncomarkers in addition to COVID-19. The study was conducted as part of the Priority 2030 federal program.