A research team from ITMO University and the Almazov Center proposed a new contactless method for measuring blood flow in the upper limbs. The method is based on video recording of the skin surface under green light measuring the absorption of red blood cells. This helps to see how effective the circulatory system and the blood flow regulation are. The experimental results showed that the proposed method is as accurate as the traditional one. However, it is easier in use, cheaper, and fits more patients. The research was supported by the Russian Science Foundation (grant 15-15-20012) and published in Biomedical Optics Express. 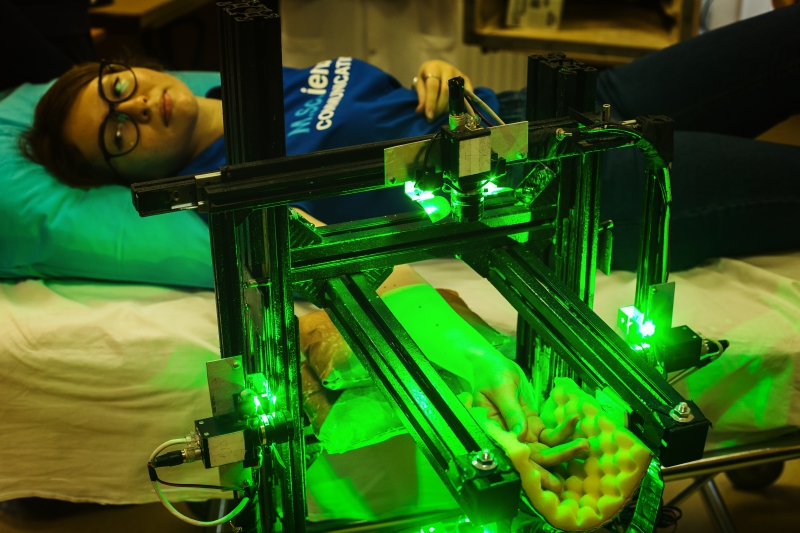 Contactless system of measuring blood flow in the upper limbs

Measuring blood flow in the limbs is an important diagnostic indicator. By studying how efficient is the heart in supplying blood to the limbs, we can see whether the cardiovascular system works properly, and evaluate parameters of the blood flow regulation. Currently, the researchers usually use contact (or tensiometric) methods of occlusive plethysmography to measure the blood flow in the limbs. Such an approach is based on recording the changes in the volume or diameter of a limb due to its filling with blood during venous occlusion.

A way of affecting the blood flow, occlusion happens when venous outflow is stopped by applying a slight pressure on the arm without interrupting the arterial blood flow. As a result, one can determine the blood flow from the heart by just measuring an increase in the volume of the limb. However, contact measurement systems are difficult in adjustment and use. In addition, such methods are expensive and require to be adapted for each new patient.

To overcome the limitations of standard methods, scientists from ITMO University and the Almazov National Medical Research Center developed a contactless system for measuring blood flow in the upper limbs. It is based on photoplethysmography. This technique is capable of tracking changes in the blood supply of the skin using video recording of the absorption of green light. When the green light hits a red blood cell, the reflected wave changes its polarization. The camera registers only this modified signal and tracks when it gets most intense. The reason for the increase in light absorption during venous occlusion can be explained by the increase in the number of red blood cells, most likely due to the expansion of the small veins of the upper layer of the skin.

To assess the accuracy of measurements using the new system, the scientists conducted a series of experiments and compared the values ​​obtained by traditional and new methods. Experimental measurements were performed on healthy volunteers. The signal was recorded for several cycles of venous occlusion. The results of cold stress effect on the vessels work obtained by the new method almost completely coincided with the results of traditional measurements.

“In this research project, we used four cameras for contactless measurements to ensure the registration of the signal from all sides of the hand. This would allow us to identify the heterogeneity of the signal, if it occurs due to the difference of capillaries density and functioning in different parts of the skin. We developed special software, designed and assembled the equipment necessary to synchronize and process the data stream simultaneously from the four cameras. Yet, during the study, we saw that the difference was not that great, which means that in the future measurements can be carried out with only one camera,” comments Alexei Kamshilin, member of the International Scientific and Technical Center “Computational Optics, Photonics and Image Visualization” of ITMO University.

The proposed method does not directly measure the total musculocutaneous blood flow. However, the research has confirmed that the measurement of skin blood flow is subject to the same regulatory effects as the general blood flow in a limb. The proposed contactless method is as accurate as the traditional one, but it is cheaper, easier to use, suitable for most patients and can be applied not only to the upper but also to the lower limbs without additional optimization. Right now, scientists are working to adapt the proposed method for the legs.

The researchers found that by registering a change in the absorption of green color by the skin during the venous occlusion, it is possible to determine the state of blood flow in its upper layers. Changing the conditions of the experiment influences the tone of blood vessels and affects the speed of the blood flow. This allows assessing the vascular resistance regulation by the nervous system and other control mechanisms. Such regulation flaws are observed in a number of diseases accompanied by damage to nerves and blood vessels.

“Our ultimate goal is the creation of a convenient medical device for assessing blood flow in both upper and lower limbs, since the registration of blood flow disorders in the legs has an important additional diagnostic potential. Thus, in diabetes, complications most often affect the skin of the lower limbs. There is even such term as “diabetic foot”. The new technique will be of interest to both endocrinologists and vascular surgeons who are engaged in the treatment of varicose veins of the lower limbs, as well as the restoration of the blood flow in patients with atherosclerosis of arteries. At the same time, many changes in the regulation can be established at sufficiently early stages of the disease when prevention and treatment are most effective,” notes Oleg Mamontov, research associate at the Research Department for Cardiovascular Physiology of the Almazov Center.