Today, when new drugs are designed with the help of supercomputers, and electronic devices operate on a nanoscale, it is very important for scientists to understand how neighboring molecules behave towards each other. For this purpose, they need to know the sizes of atoms with the highest degree of precision. Modern quantum chemistry methods can be of help here, but the answers they offer are either not accurate enough or take months of work to produce. Scientists from ITMO University and their colleagues from the Russian Academy of Science proposed a new method of statistical analysis of intermolecular interactions and sizes of atoms. Their research made the front page of the ChemPhysChem journal. 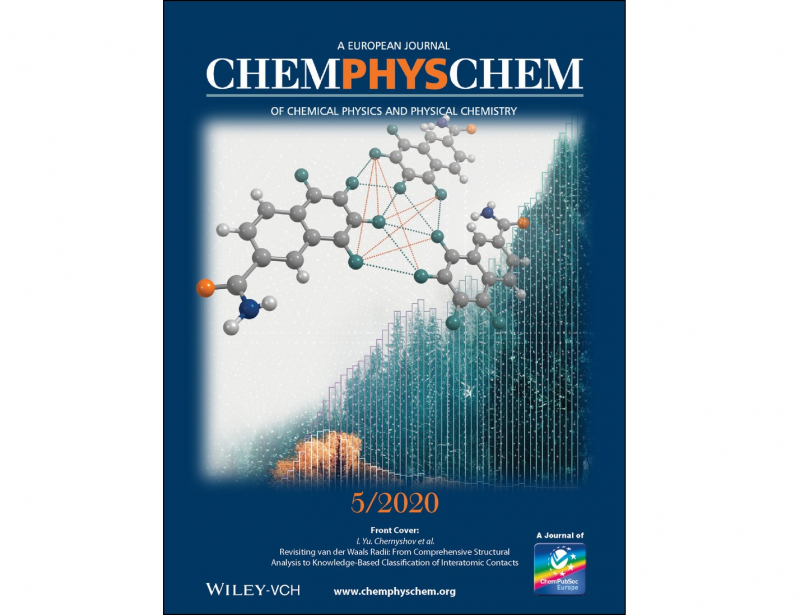 “We have the Schrödinger equation that can be used to describe any quantum system, says Ivan Chernyshov, researcher at ITMO’s ChemBio cluster. It is impossible to solve it with high accuracy. Quantum chemistry is the field of quantum mechanics that is dedicated to the approximate solution of this equation for chemical systems. Still, there’s one problem. The approximation methods work very well when we are describing the behavior of individual molecules, but in case of intermolecular interactions, the inaccuracy is too high. If we try to increase the computations’ precision, the time they require grows as well - to the point that the solutions call for a great amount of time of supercomputers' operation.”

Then again, today it is very important for scientists to know the energy of intermolecular interactions. This knowledge makes it possible to understand how molecules of drugs affect cells, or how new materials for organic electronics work. The smallest changes in the manner of molecules' interaction can make an invention very effective or completely infeasible.

Chemists found a way out: in order to identify the extent to which intermolecular interactions affect the properties of a chemical system, they started using the principle of the effective size of atoms, commonly known as van der Waals radii. This concept implies that if atoms get closer to each other than a specific distance, then their interaction is significant; otherwise, it can be neglected.

“At some point, it was decided that interaction between molecules is significant in the instances when the distance between atoms is comparatively small, explains Mr. Chernyshov, but how do we find the specific value? Scientist Linus Pauling came up with the following approach: let’s take molecular crystals for which we have a great amount of experimental data in regard to their geometry, look at the distance between atoms in various molecules, find their average values and thus get some assumed size of an atom - the van der Waals radius. If the distance between two atoms is less than the sum of these radii, then they are located close enough for their interaction to be strong enough to be considered significant.”

Yet, due to the specifics of the method for determining van der Waals radii, their values are usually undersized by 10-15%. As a result, mistakes make their way into the analysis of chemical systems, and many interactions are neglected as insignificant, which makes researchers’ work less efficient.

“This mistake originates from the inferiority of the method for determining the average distance between atoms in different molecules, explains Mr. Chernyshov. We have a great amount of experimental data, so to speak, all the possible options of interactions for two specific atoms from different molecules, which is billions of instances. If we draw a graph of interatomic distances’ distribution based on this data, we’ll see that it looks like a fast-growing slope determined by incidental pairs of atoms with a small apex at the beginning, the so-called van der Waals peak, evidence of interatomic attraction. The center of this peak corresponds with the optimal distance between the atoms, but it is not always possible to find its location, only for some types of atoms. As a result, it is half of the peak’s height that’s used as the average distance - an approximation method that underestimates the sought quantity by more than 10%.”

“Can’t see the trees for the woods”

A team of scientists from ITMO University in collaboration with specialists from Nesmeyanov Institute of Organoelement Compounds proposed a new method of statistical analysis that allows to determine the size of atoms better, and therefore tell which intermolecular interactions are significant and which can be neglected.

“We’ve come up with a method that allows us to draw a graph determining van der Waals radii more efficiently, one that makes the van der Waals peak visible. From all the data on the interaction of two atoms we only take direct interactions, sifting all kinds of accidental contacts. To do that, we present all atoms as spheres and take only the pairs where no other atoms are located on the line drawn between their centers. In other words, the atoms we choose have to be located on one “line of sight”. This way, we sift out accidental contacts that only muddle the calculations. By using this approach, we got very “clean” graphs where van der Waals peak, which shows the average distance between the atoms at which the force of interaction rapidly diminishes, is distinctly visible,” comments Ivan.

Despite the method proposed for solving this extremely complex task from the field of quantum chemistry being quite simple, it allows to get sufficiently precise data that is essential for assessing the sizes of atoms and molecules and the manner of intermolecular interactions, which is very important in regard to modern applications.

“Take the simplest example: today, scientists actively research the interactions between drugs and proteins in organisms, explains Mr. Chernyshov. You have a good molecule that has already shown its efficiency, but you have to improve it by amplifying the bond with the active center. In order to do that, you need to understand which intermolecular interactions are significant and which aren’t. So you take van der Waals radii and check that. But the standard values of the radii that are used today were determined empirically, and there’s no telling what exactly they correspond with, which can affect the precision of forecast for new systems. Our method offers to considerably increase the precision of such forecasts.”

The research made such an impression on the staff of ChemPhysChem that it has been decided to use it for the front page of their next issue. According to the authors, that happened not just because of the high significance of the research for specific applications but also because the research illustrates the fact that you have to be very careful about using results you get from analysing Big Data.

“Our research is great at showing that the increase in the amount of data doesn’t always mean that you can get a better model with them. First and foremost, it is the processing of this data that is important, concludes Mr. Chernyshov. The journal’s front page reflects the main idea of our research, which can be expressed by the popular saying “can’t see the trees behind the forest”. The amount of data that you gather is not always important; what is important is to understand what they mean. The van der Waals radii that were calculated with the help of the old method are now part of chemistry textbooks and are used in many versions of the periodic table. Most chemists have forgotten that these standard radii were determined with a high degree of approximation, and used them to make important conclusions where such inaccuracies count. And now it turns out that everything is a bit different.”