The winners of Scopus Award Russia 2018 have been announced in Moscow. Organized by the major publishing company Elsevier, this award is given to scientists whose works are published and cited the most. This year’s winners of Scopus Award Russia are two researchers working at ITMO University: Anvar Zakhidov, a professor of the Texas University at Dallas and head of ITMO’s Laboratory of Hybrid Nanophotonics and Optoelectronics; and Valentin Milichko, a research fellow at the University’s Faculty of Physics and Engineering, who won the award in the category “Young Scientists”. 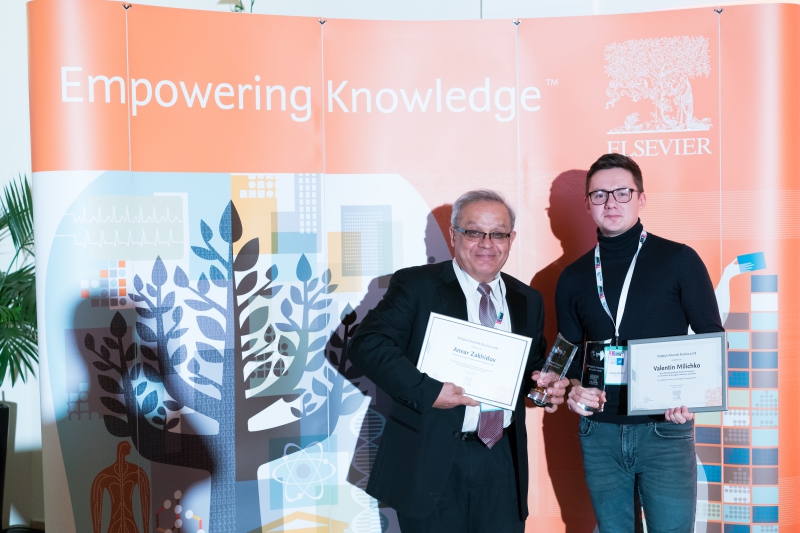 Anvar Zakhidov and Valentin Milichko. All images provided by the Faculty of Physics and Engineering.

The Scopus Awards, established by the major scientific publisher Elsevier, was first held in China in 2004. Since then, the awards for scientists with most publications and citations are given out in Latin America, Asia, Europe and Russia.

The amount of one’s publications is indexed through Scopus, the world’s largest interdisciplinary citation database which contains more than 23,000 scientific journals put out by 5,000 publishing houses from around the world. Data from Scopus is recognized by the Russian Ministry of Science and Higher Education as one of the criteria in performance assessment of higher education institutions.

As the Awards’ organizers point out, Scopus is an objective indicator of scientific achievement: “a scientist’s contribution to science is measured by the number of their published articles and their citation index in the global media, therefore eliminating any subjective bias”.

During the official ceremony, held in Moscow, awards in five nominations were presented. Overall, 19 Russian researchers were included on a list of Russia’s top-cited scientists. The winners of Scopus Awards Russia 2018 were chosen from 11 subject areas used by THE to compile its international university rankings. As per the rules, scientists that have already won in the past five years are not eligible for the awards. Winners were picked according to the following criteria:

- the number of publications indexed by Scopus in 2015-2018 in the chosen subject area;

- the average number of citations per publication;

- the field-weighted citation impact (FWCI) for the publications in question.

This year, the Awards’ organizers have introduced the Prominent Topics category, which celebrates scientists who publish the most articles in the world’s most actively developing subject area. The winner was Anvar Zakhidov, a professor of the Texas University at Dallas and head of ITMO’s Laboratory of Hybrid Nanophotonics and Optoelectronics, for his works in the field of “Perovskite; Solar cells; methylammonium lead”, which has a Prominence-percentile of 100.

Prof. Zakhidov spoke to ITMO.NEWS about his work and how an international research team managed to create a new field, optoelectronics and nanophotonics of hybrid perovskite nanostructured systems and materials, in just five years.

What research have you worked on lately?

For the past three years, my team at the Nanotech Institute of the University of Texas at Dallas has worked on the creation of nanostructured perovskite materials and devices based on these materials. What does “nanostructured” mean? Most scientists make thin films from solutions or other forms of perovskites: composites. We, however, have been able to use nanoimprint lithography and perovskite-based nanoimprint structures to produce many new exciting results, such as improved photodetectors, luminescent devices with improved brightness and efficiency, and metasurfaces.

But it should also be noted that we started working with perovskites even earlier, about five years ago. First, we studied the fundamental properties of the material itself. We discovered an unusual magnetic effect and, together with Valy Vardeny’s team from the University of Utah, published an article in Nature Physics. Together with Vitaly Podzorov from Rutgers University and his team, we also found that the material has interesting properties in regards to suppressed electron-hole recombination and others. This served as a basis for a widely-cited article in Nature Communications.

What, in your opinion, helped you achieve success in the world’s most actively developing subject area, and so quickly, too?

We’ve been especially successful in the past three years thanks to the help from the team at ITMO University. I first met Pavel Belov (head of ITMO’s Faculty of Physics and Engineering – Ed.) in February 2016 at a conference in Cuba, and he invited me to ITMO. On a trip to Russia, I met with him and his staff and told them about our work regarding perovskite-based solar elements.

Almost immediately after that, Sergey Makarov (a researcher at the Faculty of Physics and Engineering and head of ITMO’s Hybrid Nanophotonics and Optoelectronics Lab – Ed.) came to the US to work in my team. He barely spent more than a week with us, but our collaboration was useful and productive. Together, we managed to introduce silicon nanoparticles into our perovskite films, which led to very powerful nanoantenna effects due to dielectric resonance.

When he went back, Sergey took a few samples for future research. Working on the opposite sides of the world, we were able to discover a curious effect related to luminescence in metasurfaces. Soon, a whole team of ITMO researchers came to Texas to develop this project further. By then we had already won the megagrant and began to establish our pride and joy, the Laboratory of Hybrid Nanophotonics and Optoelectronics (PeroLab) at ITMO University.

Within a year or so, the combined forces of ITMO staff and Yuri Kivshar and his team studied a whole series of nanophotonics effects in nanoimprinted perovskites, with articles published in Nano Letters. For instance, we learned that perovskite structures can be used to create nanoantennas.

What are your goals for the near future?

As I’ve said, our united efforts gave birth to a new, exciting field that, in short, can be referred to as “optoelectronics and nanophotonics of hybrid perovskite nanostructured systems and materials”. Thanks to all the research done by us and hundreds of other research teams around the world, we are able to explore the potential of perovskites, which are an unusual material that is host to many curious physical processes.

Our goal is to learn to use their effects in order to create a new generation of electronics. Of course, it won’t be easy, but I believe that our large international team can handle it. For example, as a result of a collaboration between Dmitry Gets, Eduard Danilovsky, Arthur Ishteev, my team and the staff of MISIS University, we have been able to create the world’s first dual functional devices. It turns out that solar panels have the capacity to transform such devices into light diodes. Perovskites can enable such functions, and that’s why in the future we want to use them to create multi-functional devices.

We’re working with the company Hevel to create solar panels coated with thin layers of perovskites. These panels will be able to not only convert solar energy, but also charge themselves. We’re also developing a new type of small, efficient nanolasers. As you can see, we’ve got our hands full.

In the nomination “Young Scientist” (under 35), winners were selected according to following performance indicators:

- field-weighted citation impact according to SciVal.

The winner was Valentin Milichko, a researcher at ITMO’s Faculty of Physics and Engineering. Valentin has a wide scope of research interests: his work concerns dielectric nanophotonics, non-linear optics and new nanostructures, as well as biophysics. In the latter case, he studies the use of organic and non-organic nanoparticles in the visualization and control of molecule states.

Valentin Milichko spoke to ITMO.NEWS about his work, interdisciplinary research and how he stays up to date on scientific trends as a young scientist.

What are the main topics of your current research? What motivates your wide scope of interests?

All of the works that helped me get this award are related to new, developing fields of study. Dielectric nanophotonics became a thing about ten years ago, and physical chemistry of metal-organic frameworks formed five years ago.

I prefer to always focus on new things. I like working in a field that has no simple solutions; it gives me enthusiasm. Thus I left classic optics for physical chemistry, which I am still involved in, and for biophysics. Right now, I’m focusing on physical chemistry, namely non-linear optics and non-linear mechanics of metal-organic frameworks.

What are the practical applications of these materials?

I believe that in the next decade metal-organic frameworks will become the primary material in all sorts of fields, from chemistry and physics to engineering and memory devices.

You work at the intersection of disciplines; what helps you be successful in different fields?

Today’s science is becoming truly interdisciplinary. Solutions to many complex issues in our lives lie within physical chemistry, biochemistry, biophysics and so on. At the same time there aren’t that many people who work on the fringe of sciences. If we want to develop interdisciplinary research, we need to be able to communicate to those in other fields of science. For instance, as a physicist, I must converse with biologists and chemists and work with them on common tasks.

Interdisciplinary research is difficult, time-consuming and takes effort, but it’s also very interesting. Sometimes when you publish the results of such research, you need to give people two or three years to understand the fundamental and applied potential of your findings.

How should a young scientist today go about staying up to date on promising research? How helpful are scientometric tools?

For me, every day begins with me checking Scopus. I always see if any of my colleagues or experts I trust have published anything new. I think Scopus is one of a scientist’s main tools, as it lets you be aware of your position in the scientific world.

What are your goals for the near future?

I’ve already gotten to work on various interdisciplinary research initiatives and I feel at home working with physical chemistry. I’ve submitted an application for a major international project that I hope will be approved. The project is focused on new electronic optical devices based on metal-organic frameworks. I’d also be interested in combining research with editorial work in international scientific journals.