After earning his PhD in theoretical physics in 2008, Dmitry Karlovets joined a postdoc program in Germany where he spent another three years. In 2021, the scientist joined ITMO.Family as a research fellow at the School of Physics and Engineering. In this article, Dmitry speaks about why he decided to pursue his academic career in Germany, explains the difference between research programs in Russia and abroad, and shares his academic goals for the future. 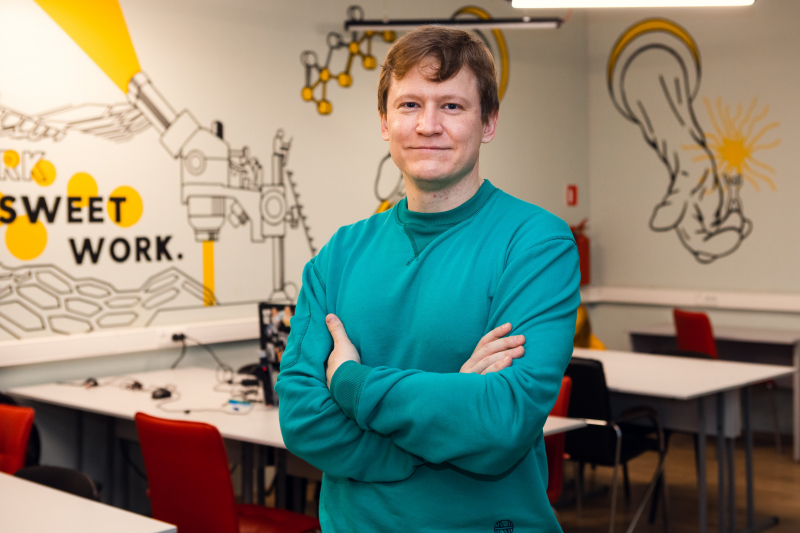 How did you learn about ITMO’s Fellowship & Professorship program? And why did you decide to apply?

I closely followed the work of the scientists at the School of Physics and Engineering. Then, one of my colleagues at ITMO told me about such an amazing opportunity. The program goes well in line with international standards and is perfect for postdocs who have long worked abroad and plan to come back to Russia. Moreover, it is generously funded. By this, I mean that ITMO offers competitive salaries that are on par with those in Germany, France, and the US.

Last year, you also participated in a similar program from the Max Planck Institute for Nuclear Physics. Did you notice any differences?

After I received my PhD from Tomsk State University in 2008, I thought long and hard about where to go next. At that time, few educational and scientific organizations in Russia offered postdoc programs, so I decided to take my chance in Germany.

In 2013 and 2014, I received a scholarship from the Max Planck Institute for Nuclear Physics. Then, from 2014 to 2016, I was chosen for the Humboldt Research Fellowship for experienced researchers. While in Germany, I researched quantum physics of wave packets and radiation physics.

What’s different about Russian fellowship programs is that they involve so-called “deliverables” – certain results that recipients should achieve by the end of the program. This includes articles, grants, mentorship, and delivered courses. Research fellows in Germany or the US have either similar or less strict deliverables in terms of quantitative metrics. The thing is, international scholarships are often funded not by the home organization of a holder but by a fund. There, people believe that scholarships go only to the brightest minds who can be trusted and require no additional control over their expenses and performance.

In Russia, however, researchers have to sign an employment contract that lists what must be achieved over its duration. There’s nothing wrong with that, in my opinion, though Russia could do with a system in which independent researchers can receive funding from external foundations. This is, in part, the role of the Russian Science Foundation, but we still have a long way to go and much to learn from our international colleagues.

In a 2013 interview, you mentioned the lack of transparency over the distribution of funds as one of the main reasons you chose to leave Russia. Do you think the situation in Russian science and higher education has changed since then?

The situation has improved considerably, although some Russian universities still face problems that keep them from going international. They’re rooted in a lack of transparency over distribution of funds and a poor quality of management. We don’t have enough skilled managers with an international background in science and higher education. Yet we shouldn’t underestimate the work done by certain universities in Russia, such as ITMO University.

Nowadays, specialists from all over the globe work at ITMO and receive competitive salaries. Apart from that, many postdocs who worked abroad are returning to Russia and bringing back ideas on how to enhance training and research at Russian universities.

What do you do at ITMO?

I supervise a research group that performs studies at the intersection of theoretical particle physics and quantum optics. We develop particle models and investigate the relationship between De Broglie waves and quantum processes. In the meantime, we collaborate with various experimental scientists. Not so long ago, our delegation, headed by ITMO Rector Vladimir Vasilyev, visited the Joint Institute for Nuclear Research in Dubna. The visit paid by our scientists resulted in new scientific collaborations in the field of physics of twisted particles.

Could you tell us more about the field and its scientific importance?

A sheer chance plays a major role in scientific discoveries. It all started in 2010-2011, when scientists from Belgium, the US, and Japan figured out how to make twisted wave packets using electron microscopes. With the discovery came the need for formulas describing how twisted particles work and how they can be used.

Speaking about such particles, we should bear in mind that the wave properties of particles vanish at high energies. With great momentum, a particle starts to move as fast as the speed of light. At this moment, the particle resembles a small sphere more than a wave. But it’s a different story with the Bose-Einstein condensate, the particles of which have a low momentum and yet retain their wave-like qualities at low energies. At least, that’s how it is on the surface. In fact, some particles can retain their wave properties at high energies, say, if they are twisted and made to rotate around the vector along which they move and then sped up with the help of accelerators.

Twisted particles are currently used in electron microscopy when scientists want to analyze the structure of magnetic nano- and metamaterials. So far, it's their only known use. We have many other ideas, but they’re still in progress. Together with our colleagues from Dubna, we will continue to study “twisted” physics at high energies with the help of linear accelerators.

What are your goals with this project?

How do you think future research on twisted particles can change our lives?

We don’t exactly know yet, but such particles can be used in different ways, be it to perform micromanipulations with objects or to conduct medical diagnostics. The discovery may not change the life of ordinary people but it’ll indeed help scientists with applied research.

You have been a vegetarian for several years now. Why did you decide to change your lifestyle?

I’m from Norilsk. Since the city is located close to the Yenisei River, there are always lots of fresh and delicious fish. And it’s usually much cheaper than meat. For some reason, I stopped eating meat when I was 16 but I still eat fish from time to time. So, I am a pescetarian, to be exact.

I enjoy learning foreign languages. I like reading poems by Joseph Brodsky in English and also studied German when I was in Germany. I’ve been taking tango classes for several months now. I think highly of this dance and favor music by Astor Piazzolla. Also, I am keen on classical music such as operas and ballets. My favorite one is Tchaikovsky’s The Queen of Spades. I am also a huge fan of Giacomo Puccini and Dmitri Shostakovich.