A research team from ITMO University, Australian National University, and Tel Aviv University has experimentally demonstrated a new approach to the creation and control of configurable photonic structures with fixed topology. The key lies in the physical properties of resonators. 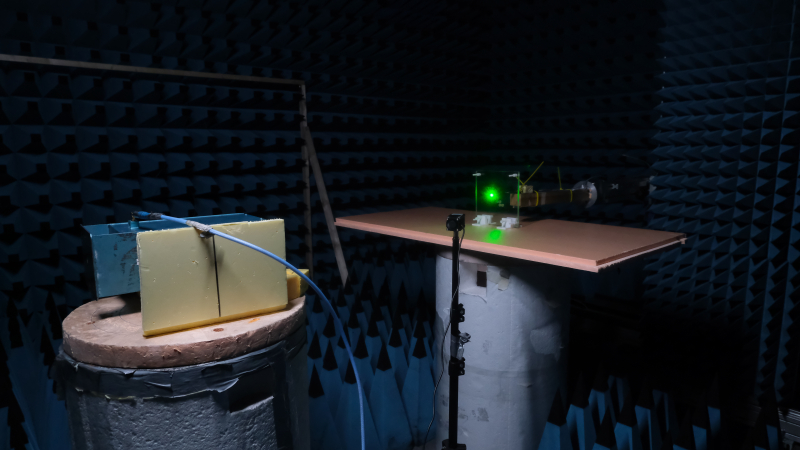 The installation that was used in the experiment. Photo courtesy of the Faculty of Physics

Topological photonics is a relatively new cutting-edge field that studies unconventional electromagnetic properties in optical systems. The field’s main focus is on topological edge states that appear in resonator arrays and are characterized by electromagnetic fields located on the edge of the system.

Topological states are fascinating because of their resistance to disorder and structural defects of the system, thanks to their global symmetries. All this makes them great for the creation of secure photonic devices and technologies based on photonic structures.

One of the main focus areas of topological photonics is the capacity to control these states, change the location of energy in structures, turn electric excitation on and off for certain elements, and so on. The solution to these issues is a work in progress. For example, specialists from the Faculty of Physics have recently demonstrated a way to edit the topology using the shape and orientation of particles.

This time, the researchers have suggested controlling topological states through local temperature changes in the system’s resonant elements. The new method allows switching the states on and off in various areas of the structure.

A zigzag chain of resonant elements was used to demonstrate the new approach. The effect in it is determined by the resonators’ parity and the polarization radiation to which the system is subjected.

As the structure involves particles of dielectric ceramics – a material sensitive to changes of physical parameters – it made sense to assume that the structure can be controlled by influencing its particles. For example, as dielectric permittivity is significantly lower when heated, this property can be used to reconfigure the entire system.

Computer modeling showed that the particle will get “turned off” when heated with a laser and localized energy will switch to another particle or an opposite edge, but until now, this hadn’t been proven experimentally.

“I was offered to join this project a year ago as part of my Bachelor’s thesis. We’ve done some modeling, but experiments in such structures require a very high precision. We needed to set up the resonance between particles in such a manner that it would differ for no more than one megahertz, and we managed to achieve it.

We’ve conducted the experiment for a system made of seven elements without heating and for eight elements with heating. By heating the eighth element, we achieved the state of the system equal to that of seven elements. The magnetic field simply disappears,” says Georgiy Kurganov, the paper’s first author.

The authors note that this effect can be scaled up to the optical range (as of now, the experiment was conducted in the microwave one) and demonstrated in three-dimensional structures. The research team also plans to see if it’s possible to reconfigure structures more smoothly and gradually. This would pave the way for the creation of next-gen photonic memory devices, for example, those based on materials with phase memory.

“The suggested approach opens new opportunities for temperature-controlled photonic topological systems. In the future, this method can find its applications in photonic logic and memory devices,” says Dmitry Zhirihin, a co-author of the paper and researcher at the Faculty of Physics.