Available THz: An Article by ITMO’s Researchers Is on the Cover of the Magazine Laser&Photonics Reviews

Laser&Photonics Reviews published an article by ITMO University researchers in its January issue; the illustration to the article was put on the cover. The article is devoted to ways of enhancing terahertz radiation by photoconductive and optical nanoantennas. 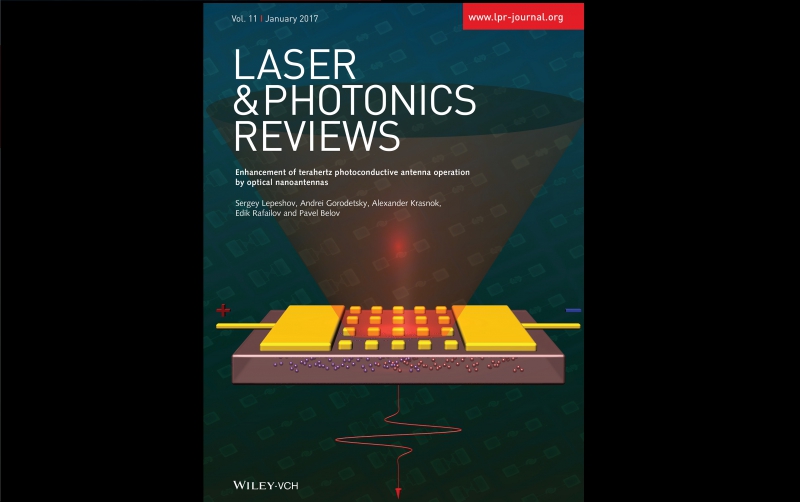 Terahertz (THz) radiation has several extraordinary features that make it interesting for scientists from all over the world. THz radiation passes through most dielectrics, doesn’t harm living organisms, and is absorbed by conductive materials. It can become a safe alternative to using X radiation in such fields as security, medicine, and data transfer.

The spectrum of THz frequency is between infrared and super-high-frequency. It is very easy to generate them, for instance, TV remotes use IR radiation while SHF waves help us warm up food in a microwave oven.

However THz radiation is not simple. Registering it is hard, as it has the same frequency as the IR emission coming from objects of indoor temperature. That is why THz radiation sensors are susceptible to strong thermal fluctuations.

It is not easy to generate coherent THz radiation, as approaches used for generating SHF radiation are expensive and technically complex due to a synchrotron or a free-electron laser is required. It is also possible to use optical methods applied to semiconductor lasers. Electrons in a semiconductor are given extra energy, which makes them jump over a band gap. As they return to their initial state (this process is called relaxation, electrons give this extra energy back as electromagnetic radiation. Generating THz radiation at room temperature is also impossible, as it is necessary to make electrons moving from one level to another very fast, and the gap between the levels has to be small. Thus, the radiation source has to be chilled to cryogenic-level temperatures. According to Sergei Lepeshov, engineer at the Department of Nano-photonics and Metamaterials, and the first author of the article, sources of THz radiation that can work at room temperature were invented in 2000-s due to development of new laser technologies. For example, one can use a femtosecond laser — thanks to its ultra-short pulses, the beams of light require very little space, where the whole pulse energy is concentrated. It gives an opportunity to shorten the process of relaxation. One can also use two continuous laser waves that have different frequencies, both in THz band. Yet, even that can be insufficient to attain the necessary power levels.

"To generate THz radiation, we use semiconductors with minimal lifetime of charge carriers. But to increase efficiency of converting optical radiation into THz, we cover a semiconductor body with specifically shaped golden contacts. This is called a photoconductive antenna. An external field increases the energy of charge carrier, and the power of THz radiation has increased, respectively. There are ways to increase the efficiency of radiation further, like, for example, using optical nanoantennas. The article published in Laser&Photonics Reviews is devoted to them," said Mr. Lepeshov.

According to the scientist, there are many types of optical nanoantennas consisting of different materials and structure. The results of their review were used to create a chart, where their different properties were compared.

"Many antennas have disadvantages. As of now, my colleagues and I work on nanoantennas of the new generation. Usually nanoantennas and electrodes are made of gold. We plan to use silicon, as it reflects and absorbs radiation less than metals do. Furthermore, unlike metals that melt affected by intensive laser pulses, silicon nanoantennas are a lot more resistant."

You can read the article "Enhancement of terahertz photoconductive antenna operation by optical nanoantennas" here.