On October 12 to 13, the 4th International Research-to-Practice Conference on Lighting Design was held at Alexandrinsky Theatre’s New Stage. Participants discussed new methods and the best foreign and domestic practices in lighting design. The event is an open international platform for new ideas, methods and tools. This year’s conference drew more than 500 architects, lighting designers, engineers, artists, urbanists, experts in IT, multimedia and smart technologies, as well as scientists, students, and representatives of the government and the industry. 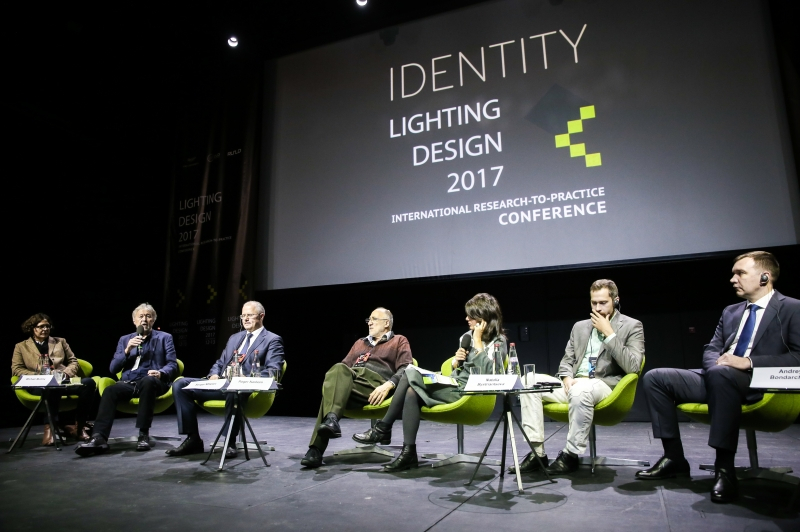 The Conference is held annually by ITMO University’s Higher School of Lighting Design and the creative association RULD. Its goals are to showcase the best Russian and international practices in lighting design, highlight the most relevant trends in future technologies, find new ways of working with light and to develop cross-disciplinary educational and research programs. This year, in addition to lighting design, the event concerned itself with the issues of creating improvements in urban environment, tourism, art, sociology, design and IT.

As ITMO’s Rector, Vladimir Vasilyev, emphasized at the opening, a complex approach and development of cross-disciplinary projects are the trends that are becoming increasingly more common in various fields of research. ITMO University, too, recognizes the importance of these initiatives; two years ago, the Higher School of Lighting Design was created here, where art, science and IT come together.

“ITMO University, of course, has its own, traditional, areas: information technology, photonics, and biotechnology. But, as of late, we’ve tried to develop our established competencies in new areas. This is what our Art&Science cluster is meant to do; in addition, we’ve advanced into medicine, urban science, worked in social and creative fields. Our Higher School of Lighting Design is a great example of how successful approaches by specialists from different areas can work together.” – said the Rector. How modern urban analysis tools are made, why they are needed by the world’s professional community, which tasks should light environments solve in today’s cities and how to preserve a city’s identity – these and other questions were brought up by Russian and international experts as part of a discussion focusing on the use of IT in designing modern light environments.

As Natalia Bystryantseva, head of the Higher School of Lighting Design, member of the jury and Russian partner of the international award in innovative lighting design LIT AWARDS, noted, these days what matters most when designing an urban light environment is the information.

“The first thing that any lighting design should do is find the ways to approach light in a rational way. The paradigms that existed before and pushed a “the more light, the better” approach are going out of style. Today, we have access to a great deal of technologies that let us start defining the quality of an urban environment, create points of attraction that will define it, let people use these environments for communication. There are enough analytical tools at our disposal to control and verify the quality of our solutions. This is what will truly let investors have faith in projects; all of this creates a new paradigm in which light becomes a part of the city’s brand,” – she said.

And though today the choices for lighting concepts are chosen on a “like it – don’t like it” basis, new analytical tools will help determine their effectiveness on the preliminary stages, reducing risks and cutting costs. Lighting will stop being a tool – it is a full-fledged part of a smart city, says Michael Mullins, associate professor at Aalborg University’s (Denmark) Department of Architecture, Design and Media Technology and board member of Lighting Metropolis – a leading Scandinavian project that brings innovative lighting to cities and universities. He also added that light environment design is a field in which a cross-disciplinary approach is crucial.

“Light drives a city’s economy. IT can help us make illumination one of the most important elements of smart cities. The opportunities provided by smart light are just one aspect of it. We shouldn’t forget about the art that also affects a city’s image. To facilitate the development of light environments, it is necessary to unite the efforts of specialists from various fields,” – says Michael Mullins.

“I believe that IT can really help further develop light environments. I see a few aspects in which we need to study and apply new methods. The first one is what we call “night geography”. A city is like a completely different territory at night. We can explore this new territory; first of all, we need to understand where people spend their time at night, what they do, what their expectations are and how they get to where they need to be. This is important, as it is connected directly to our projects. Yes, we can implement them even when they are made for an audience we know little about. But these new analytical tools can help us study the issue in-depth and avoid risks,” – he said. Narboni has used analysis of Big Data acquired from social networks for some of his projects in Paris. His project team received a massive amount of information about people’s movements at night, their activity and points of attraction. Using this data, designers can develop new solutions. Data analysis results can demonstrate to city authorities what kinds of lighting should be removed, which need to be less bright and which areas need to be illuminated better. With the development of IT in design, such methods can be expanded to use information received on a daily basis and thus react to changes in environment in a timely manner.

New analytical tools were also used to prepare the St. Petersburg Development Program – a complex project designed and carried out by ITMO University’s Higher School of Lighting Design and state unitary enterprise Lensvet. This is the first city-scale project in Russia that aims to examine the city’s light environment and predict its development while taking into account the prospects of the citizens’ quality of life and the city’s energy sector. The project’s results will serve as basis for a targeted program for the development of the city’s lighting system for the period of 2018 – 2030 and up to 2050.

The project was presented at the conference; Sergey Mitelev, head of Lensvet – the city’s oldest state unitary enterprise responsible for public lighting. “While developing the first stage of this program with our colleagues from the Higher School of Lighting Design, we analyzed the social activities of the residents from 18 districts of the city, their mobility, number of residents per block, building density, accessibility, proximity to subway stations, etc. All the data is open sourced – from social networks, for instance, although we also used some closed sources. For example, we also considered the crime levels in areas, based on data from law enforcement. All this let us come to a conclusion on what would need to be done to create targeted programs to improve lighting in these areas of the city. We created a list of addresses according to the degree of deterioration of the lighting systems there, while also keeping social priorities in mind. Overall, the main focus of the program was energy efficiency, safety, comfort and informational value,” – said Mitelev.

He also added that the resulting data allowed specialists to evaluate the construction costs for the various works, which include the illumination of motorways, playgrounds, gardens, parks and others. In addition, complex data analysis allowed them to determine and map out the city’s “dark spots”. It is expected that by 2030 all of these areas will be properly illuminated.

According to head of Lensvet, the results of the project are already being applied in the development of lighting environments in the city’s gardens. For instance, work has already started on providing illumination in the Internatsionalistov, Pulkovsky and Sosnovka parks. Data analysis allows not only to diversify the types of equipment and light intensity used in various areas of these parks, but to also address the points of attraction and creative spaces located there.

Even though the program is planned out up to 2035, the government of St. Petersburg is already looking beyond, to 2050, adds chairman of the Committee for Energetic and Engineering Support Andrey Bondarchuk. The developed methods will help take into account the drawbacks of previous approaches and significantly cut costs. “What made this program necessary? The task of creating a comfortable urban environment was not affected by the annual budget reduction. Thanks to specialists from ITMO University, the solutions have now been developed and documented. We were also able to identify a number of existing issues, like regulatory control, lack of lighting control measures, and others. This year will mark the end of the core part of the complex development program, which will include all the advanced solutions,” – commented Bondarchuk.