The conference, held on the premises of the Sirius Educational Center, brought together more than 300 researchers in the field of nanophotonics and metamaterials from top research centers and laboratories of the UK, Germany, Sweden, France, the USA, Australia, China, Russia, and other countries. Over the course of five days, researchers presented more than 200 reports and discussed their work and future partnerships. 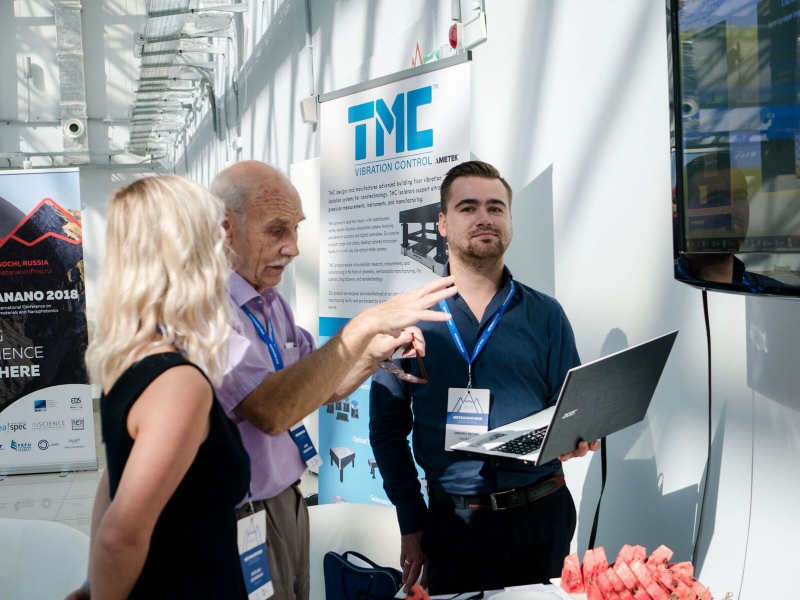 The conference was organized by the staff of ITMO’s Faculty of Physics and Engineering. This year’s METANANO was also supported by the Mediterranean Institute of Fundamental Physics (MIFP), Metamorphose VI AISBL, the Moscow Institute of Physics and Technology (MIPT), the Far Eastern Federal University, and the companies Neaspec and InScience.

320 researchers from some dozen countries participated in the conference. Among them are staff of labs and research centers in Europe, the USA, Australia, and Southeast Asia. This year marked the first time that the event was also attended by students, as the conference coincided with the First Student Conference School on Photonics, Radio Physics and Nanotechnologies, which involved more than 60 students from Russian universities (read more about it in our article)

Along with the other participants, they had the opportunity to attend a presentation by Andre Geim, the laureate of the 2010 Nobel Prize in Physics, where he spoke about the latest developments and future prospects of 2D-heterostructure research (you can read our interview with Prof. Geim here).

Over the five days, METANANO-2018 hosted more than 40 sessions, including nine special ones. Special sessions were organized in collaboration with partners of ITMO’s International Center of Nanophotonics and Metamaterials. This format, say the event’s organizers, allowed them to present a broad range of key areas and relevant research in nanophotonics, metamaterials and other fields.

“This is my second time coming to METANANO; I’ve also participated in the 2017 event in Vladivostok. Compared to last year, the event has grown in scale. I’ve noticed that the scope of topics has expanded, and there are more scientists from other fields of research, which I think is the right direction to go in,” comments Andrey Fedyanin, professor of the Quantum Electronics Department at Moscow State University.

In addition to science, the conference also had an extensive social program. After seeing the presentations and taking part in the sessions, participants took a bike ride through Sochi’s Olympic Park on the day of ITMO’s traditional bike ride in St. Petersburg. Between the two cities, more than 200 people participated in the event.

For many of the guests, this was their first METANANO conference. Some spoke to ITMO.NEWS about their work and their impressions of the event.

We develop high-sensitivity sensors. Our goal is to learn how to monitor magnetic fields with high precision, in a large scope of temperatures and regardless of their strength. This will allow us to produce images of individual molecules or, for instance, living cells. Those are tasks that are still very difficult, which is why we want to find new methods.

A good conference does two things: first, it lets you meet other researchers and establish cooperation, and second, it lets you learn about new ideas. This is my first METANANO conference, but my impressions of it are quite positive.

Researchers come to events like this to find new contacts, to meet specialists from relevant fields and to plan new projects. It’s my first time at METANANO, although not my first time in Russia.

I found the conference very well organized, and here you have the top experts in their respective fields. I work in the field of non-linear metasurfaces and met a lot of others here who work on the same goals. I would also positively note the choice of location for the conference and the level of organization.

It’s my first time at METANANO, but I’ve heard of the conference before, including from my colleagues at ITMO University. What made me finally decide to come was the impressive list of speakers: they are all renowned experts in their fields, and it was great to be able to hear them describe the results of their work. I also met my peers from other universities, with whom we’ll try to maintain collaboration.

I currently work in two fields. The first is what I presented here: research on glass and its structure. It has applications in metamaterials and plasmonics, among other things. The second is related to optical waveguides. I only got into this topic recently, but hopefully, I’ll have something to report on at the next METANANO.

During the closing ceremony, the authors of the best poster stand and the best student report were presented with special awards. The jury chose the work of Igor Reduto who represented the University of Eastern Finland and the St. Petersburg Academic University, and Frederik Walla of Goethe University Frankfurt.

The next, fourth METANANO conference will be held in St. Petersburg on July 1-5, 2019. As Pavel Belov, the chairman of METANANO-2018’s organizational committee and head of ITMO’s Faculty of Physics and Engineering, noted, this was a deliberate decision. The conference will coincide with the 10th anniversary of ITMO’s Metamaterials Lab, which was founded thanks to a grant won by Yuri Kivshar, one of the most highly-cited physicists and a professor of the Australian National University (read more about the lab’s creation, development and research in our in-depth interview with Prof. Kivshar).

“We want METANANO-2019 to be held in St. Petersburg, at ITMO University, to coincide with the 10th anniversary of our Metamaterials Lab,” says Pavel Belov, “In the future, we’ll continue to move the conference to new cities, choosing each new location through an open competition. Perhaps one day we’ll even hold it beyond Russia’s borders.”

He also adds that next year’s conference will retain its format. One of METANANO’s key goals is to provide the participants with opportunities to not only present their work but also discuss their research and future cooperation in an informal setting.