ITMO University is currently hosting the 10th international conference  "Basic Problems of Optics" (BPO'2018). From October 15 to 19, scientists will be discussing the relevant issues of theoretical research in the fields of optics, photonics, and quantum technologies, as well as their practical applications. 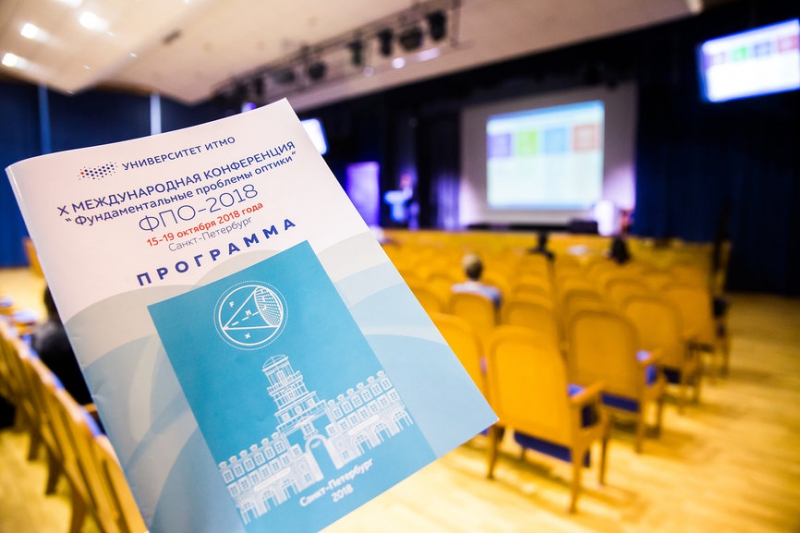 The conference was opened by Professor Vladimir Nikiforov, ITMO’s Vice Rector for Research. In his welcoming address, he expressed his confidence that BPO'2018 will give rise to new ideas and joint projects.

“It is a great honor for us to host this conference, which is being organized for the 10th time and has already become a reputable event. This conference is important not only because people acquire 70 to 80% of information through eyesight, but also because it is optical information technologies that are the cornerstone of many breakthrough solutions today, and thousands of teams all over the world are currently working on replacing electrons with quants, copper cables with optical fiber, and switching from semiconductors to  integrated optical circuits. The conference’s topics cover the whole range of these optics-related issues, from photonics materials to quantum systems. Those who are currently working on fundamental problems of optics lay the groundwork for the future of humanity,” said Prof. Nikiforov.

With time, the "Basic Problems of Optics" conference has become one of Russia’s most important events in its field. Amongst its organizers are leading Russian universities and major research teams. The conference’s program includes various sections, workshops and roundtables dedicated to the optics of femto- and attosecond laser pulses, quantum optics and fundamental spectroscopy, coherent processes of light-matter interaction, new methods of data transfer, processing and storage, and many other topics that have to do with breakthrough technologies and materials used in optical systems.

The plenary session of the conference’s first day opened with two major reports. The first one was presented by Professor Valery Tuchin from Saratov State University and covered the basic trends and prospects of development of biophotonics in Russia. According to the scientist, the report was based on the results of a meeting of scientific representatives of BRICS countries in Skolkovo. The report aims to acquaint the audience with the Russian research clusters that are developing the field of biophotonics. Among them are the laboratory of laser biomedical photonics of the Moscow State University, which conducts innovative research and has well-established connections with industrial partners, and the Bach Institute of Biochemistry that conducts research on inciting fluorescence in cancer cells in a whole organism. The speaker also drew special attention to the Institute of Applied Sciences of the Russian Academy of Science and its research on creating optical coherence tomography units, supervised by the Academy of Sciences president Aleksandr Sergeev.

“I’d like you to remember the 2018 Nobel Prize in Physics, which was awarded "for groundbreaking inventions in the field of laser physics" to Arthur Ashkin, Gérard Mourou and Donna Strickland. Their research is directly related to biophotonics. At many universities, Moscow State University included, Arthur Ashkin’s ideas are used in controlling cells and nanoparticles with the help of light.  By the way, one of these Nobel prize winners, namely Gérard Mourou, spent three years in Nizhny Novgorod as a head of a megagrant project, and part of his award-winning work was conducted there,” shared Valery Tuchin.

The next report was presented by Asger Jensen, a Danish specialist from NKT Photonics, a leading supplier of fiber lasers, fiber-optical sensor systems and photonic crystals. He spoke about the application of ultrafast and supercontinuum lasers in science and industry.

In addition to ITMO University, among the organizers of BPO’2018 were: St. Petersburg State University, Moscow State University, the Ioffe Institute, D.S. Rozhdestvensky Optical Society, and companies LOMO and Vavilov State Optical Institute. Such organizations as OpticalSociety of America (OSA), Society of Photo-optical Instrumentation Engineers (SPIE), and Institute of Electrical and Electronics Engineers (IEEE) also participated in the conference. The full list of participants and the conference’s program are available on its official website.