We Were Born In the Stars: An Astrophysicist’s Lecture at ITMO

Alexander Ivanchik, an astrophysicist with a PhD in Physics and Mathematics and a researcher at the Ioffe Institute, gave a lecture on the Open Day of ITMO’s Faculty of Physics and Engineering. Read on to learn about the history of cosmology and the stories of Nobel Prize Laureates who studied space. 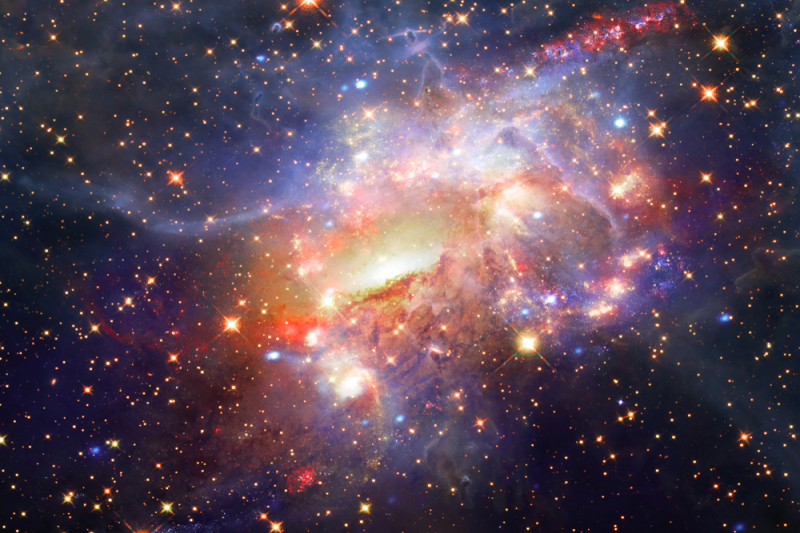 Half of this year’s Nobel Prize in Physics went to a Canadian scientist James Peebles “for theoretical discoveries in physical cosmology”. He was able to describe the cosmic microwave background, calculating its fluctuation range, estimating how it will change if cold matter is added and demonstrating the relative amplitude of oscillations in this model.
The other half of the award went jointly to Swiss researchers Michel Mayor and Didier Queloz “for the discovery of an exoplanet orbiting a solar-type star”. They designed an extrafine spectrometer which could pick up small shifts in the spectrum of a star that depend on a planet’s orbit. It was a turning point in the study of exoplanets, because in the years after the discovery scientists from all over the world were able to discover around 4,000 exoplanets scattered in the Milky Way.

Cosmology is a branch of astronomy that studies the origin and evolution of the universe from its start at the Big Bang and through its development focusing on the matter within and its internal evolution.

It is a rather old field of science that started thousands of years ago as humans looked at the night sky trying to understand their place on Earth and beyond. Cosmology’s first steps toward becoming an independent discipline, however, were made in 1915, when Albert Einstein presented his new gravity theory in the four famous lectures at the Prussian Academy of Sciences. In 1922, Alexander Friedmann, a Russian scientist, found a solution to Einstein’s field equations for the whole universe. From that moment on cosmology has been an independent subdiscipline of physical and mathematical sciences.

From Newton to Einstein

It was Isaac Newton who created the first mathematical gravity theory. It stated that masses interact according to the law of universal gravitation and the gravitational force between them is proportional to the product of their masses and inversely proportional to the square of the distance between them. Einstein, however, argued that there were no forces between masses. In fact, they curve the space-time in such a way that proofmasses in it follow trajectories without any impact. It means that the Earth is orbiting the Sun not because the latter attracts it but because it curves the space-time.

The first numerical solutions for curved spaces were developed already in 1916. Karl Schwarzschild came up with symmetrically spherical solutions which were applicable to any mass close enough to being spherically distributed like the Earth, the Sun, the stars and black holes.

Later, in 1922, Friedmann expanded them to include the whole universe, acquiring a cluster of solutions. It was clear before that space-time is curved in the whole universe, but the fact that this curvature is not constant and the universe can contract and expand was a new discovery.

The Friedmann equations are classified today as follows: the universe was “born” with the Big Bang and immediately started expanding. This process is decelerated at first, which is natural for gravity, a force that only has one value, meaning that all of the objects that obey it are attracted to each other. Around five billion years ago the expansion began accelerating. To make it possible, there would have to be a phenomenon which would create antigravity, objects being repulsed from each other. In the 1980s, this phenomenon was deduced to be dark matter.

The Hubble constant and the chemistry of the universe

Thus, Einstein laid down the theoretical background of cosmology while Friedmann provided the equations. The first observation proving that the universe was indeed expanding was obtained in 1929. Edwin Hubble, the world-renowned American astronomer, identified a regularity: he separately measured the distance and velocities to the closest galaxies. When he created a diagram, he could establish that the further a galaxy is from us, the faster it moves away. He described this relationship in what is now referred to as Hubble’s law: if two objects are separated by a distance “A” they will move away with the velocity of “B” in proportion to the Hubble constant. The constant itself is being calculated and improved to this day. It is currently at 67.4 (km/s)/Mpc (megaparsec).

The next crucial aspect in the study about the universe is its chemical compounds. In 1948, George Gamow formulated the theory of the hot universe. The expansion of the universe means that it used to be smaller, which led Gamow to the conclusion that the matter used to be denser and hotter. And 13 billion years ago it was so hot that matter as we know it simply didn’t exist. Seconds after the Big Bang the temperatures reached around 1,000,000,000K, higher than in the Sun’s core. Molecules did not exist in such conditions, and atoms were ionized with nuclei divided into their simplest compounds: protons and neutrons. The universe was an even mixture of protons, neutrons, electrons and a great amount of photons.

But how did the matter that we are used to come to being? The universe was gradually cooling down making it possible for the initial nucleosynthesis to begin, which resulted in the first light nuclei being formed. At first, the universe consisted of primarily hydrogen and helium with only 2% of heavier elements.

In cosmology, all of the particles that we are made of are called baryons. In 1966, Peebles stated that the higher the baryonic density of the universe, the more helium is being produced. How, then, did we come to being if no heavy elements like oxygen or carbon were created in the initial nucleosynthesis? We are a carbon-based lifeform surrounded by mostly water, which has a lot of oxygen, and soil, which consists of silicone. These elements were formed in the universe during a complex evolution of the first formed stars. They were massive and burned very quickly. Initially, a star is comprised of only hydrogen and helium, but when it ignites, it starts actively burning hydrogen into helium, then helium into carbon, then helium and carbon into oxygen, marganese, neon, silicone and sulphur, which are eventually burned into iron and nickel. The latter ends this long chain of thermonuclear reactions, because no further transformations are energy-efficient.

The final act of a star’s evolution is a powerful explosion that sends all of these chemical elements into the primary environment and mixes them with helium and hydrogen that make up this environment. After that the latter clusters up to form the first stars like our Sun with their own planetary systems. Consequently, all of the matter that there is today, that fills up this lecture hall and that we are made of was generated in the previous star, which existed somewhere near the then-nonexistent Solar System before our Sun. And we were born in the stars.

The relic or background microwave radiation was discovered in 1965 by scientists who were not looking for it. Arno Penzias and Robert Wilson were improving noise cancelling in their telescope when they noticed a 7.3cm noise temperature, which they couldn’t remove try hard as they might. There was a constant signal which they couldn’t identify. At the same time, a group of researchers at Princeton, including the future Nobel Prize Laureate Jim Peebles, was working on a device which would be able to locate and measure a microwave signal that was predicted by Gamow’s equations. The two teams met during a seminar where the cosmologists got to explain to Penzias and Wilson what it was that the two had discovered. In 1978, their finding was honored by a Nobel Prize.

The research was continued in the 1980s-1990s when the scientists were able to measure the radiation’s anisotropy. George Smoot and John C. Mather, the leaders of the Cosmic Background Explorer Satellite (COBE) group, received the 2006 Nobel Prize in Physics for this finding. Anisotropy allows us to estimate the 3D curvature of space and evaluate the standard matter that we all consist of. After a number of experiments it was concluded that there are only 5% of such matter in the universe with the remaining 95% occupied by a different matter. It consists of cold dark matter which creates gravitational holes. These holes later grow into galaxies and the 5% of baryonic matter getting inside of them form the basis of stars and planets. These 95% also contain dark energy. It evenly fills our universe just like relic radiation, but it has a unique pressure-volume relation: its negative pressure serves as antigravity. It was this dark energy that started dominating five billion years ago changing the velocity of the expansion of the universe.

But what exactly is dark matter? Our first understanding of it began to form in 1933, when Fritz Zwicky discovered that galaxies, which form clusters, have a velocity up to several thousand kilometers per second. Moving so fast, they were bound to have left the clusters long ago. That was why Zwicky suggested there was some kind of dark matter which we cannot see but which is responsible for the deep gravitational hole. Galaxies move within the hole without leaving the system.

Cosmology is a very important discipline. Over the last 19 years alone, six Nobel Prize Laureates were directly connected to astrophysics. These discoveries are great contributions to science as they allow us to lay down new fundamental laws of physics that cannot be observed in any laboratory on Earth yet.