An international team of researchers from ITMO University, the Australian National University, and Korea University have experimentally trapped an electromagnetic wave in a gallium arsenide nanoresonator a few hundred nanometers in size for a record-breaking time. Earlier attempts to trap light for such a long time have only been successful with much larger resonators. In addition, the researchers have provided experimental proof that this resonator may be used as a basis for an efficient light frequency nanoconverter. The results of this research have raised great interest among the scientific community and were published in Science, one of the world’s leading academic journals. Scientists have suggested drastically new opportunities for subwavelength optics and nanophotonics – including the development of compact sensors, night vision devices, and optical data transmission technologies. 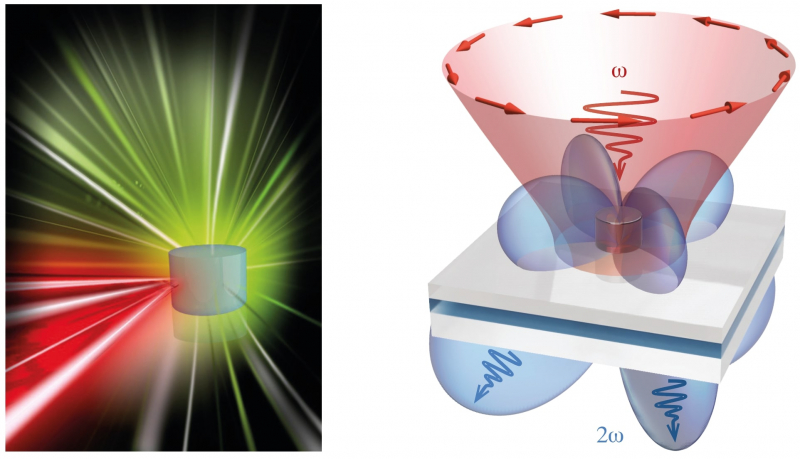 The problem of manipulating the properties of electromagnetic waves at the nanoscale is of paramount importance in modern physics. Using light, we can transfer data over long distances, record and read-out data, and perform other operations critical to data processing. To do this, light needs to be trapped in a small space and held there for a long period of time, which is something that physicists have only succeeded in doing with objects of a significant size, larger than the wavelength of light. This limits the use of optical signals in optoelectronics.

“Usually, to trap light in a certain environment, you’d need structures of a significant size, such as optical fiber cables several kilometers long similar to the ones used today to transfer internet traffic,” explains Kirill Koshelev, a staff member of the Faculty of Physics and Engineering and a first co-author of the paper. “Another option is to exploit large ordered arrays of nanoparticles operating as a single structure that traps the light.”

Two years ago, an international research team from ITMO University, the Australian National University, and the Ioffe Institute theoretically predicted a new mechanism that allows scientists to trap light in miniature resonators much smaller than the wavelength of light and measured in hundreds of nanometers. However, until recently, no one had implemented the mechanism in practice.

“Experiment is the main criterion in physics. You can develop all kinds of theories, but they’ll stay just theories until confirmed experimentally,” says Andrey Bogdanov, a leading research fellow at the Faculty of Physics and Engineering and a co-author of the study.

An international team of researchers from ITMO University, the Australian National University, and Korea University was assembled to prove this hypothesis. First, the concept was developed: gallium arsenide was chosen as the material, being a semiconductor with a high refractive index and strong nonlinear response in the near-infrared range. Researchers also decided on the most optimal shape for the resonator that would efficiently trap electromagnetic radiation.

In order to trap light efficiently, the ray must be reflected from the object’s inner boundaries as many times as possible without escaping the resonator. One might assume that the best solution would be to make the object as complex as possible. As a matter of fact, it is just opposite: the more planes a body has, the more likely light is to escape it. The near-ideal shape for this case was a cylinder, which possesses the minimal number of boundaries. One question that remained to be solved was which ratio of diameter to height would be the most effective for trapping of light. After mathematical calculations, the hypothesis had to be confirmed experimentally.

“Our Korean colleagues made a set of cylindrical resonators out of gallium arsenide, which is one of the most widely used semiconductor materials in optoelectronics,” says Kirill Koshelev. “The process is as follows: you draw circles of the required diameter on a thin slab, then etch the excess material off and end up with cylinders of the needed size. A set of cylinders with different diameters close to 900 nanometers were fabricated. For such size they are almost invisible to the naked eye. As our experiments have shown, the reference particle had captured light for a time exceeding 200 times the period of one wave oscillation. Usually, for particles of that size the ratio is a five to ten periods of wave oscillations. And we obtained 200! That means we have provided experimental proof of a drastically novel physical phenomenon: the trapping of an electromagnetic wave for a very long time using an isolated nanoparticle.”

At the same time, the diameter of the cylinders has a sharp, but not critical effect on how long they trap light. This is important because it will not be possible to achieve a precision of up to one-two nanometers during mass production of such resonators. There will always be a five-ten nanometers error which, as the experimental results show, is not critical.

“We’ve opened a completely new chapter of physics that hadn’t existed before. Our work helps revolutionize the entire field of nano-optics and the way it uses metamaterials. Before this, it remained unclear how we could make dielectrics and semiconductors to trap light efficiently. Now, we’ve found a way,” explains Yuri Kivshar, lead author of the study, research director at the Faculty of Physics and Engineering and head of the Nonlinear Physics Centre at the Australian National University.

Besides gallium arsenide, such traps can be made using other dielectrics or semiconductors, such as, for instance, silicon, which is the most common material in modern microelectronics. Also, the optimal shape for light trapping, namely the ratio of a cylinder’s diameter to its height, can be scaled up to create larger traps.

In order to succeed with their experiment, the researchers had to use a special “doughnut” light beam.

“A resonator of a certain shape, such as a cylinder in our case, responds well only to an incident field of a specific shape,” explains Kirill Koshelev. “Our resonators respond to a very specific field configuration. Visually, it’s like this: a conventional laser beam has the maximum of field intensity at the center of its beam, while ours has the minimum. In cross section it looks as a kind of ring with nearly no electromagnetic field in the center; however, tight focusing allows the beam to efficiently couple the resonator.”

“Our paper includes a step-by-step guide to creating such systems and it shows that every step is highly important. To reach maximum efficiency, you need to optimize each step:the size of the particle, its shape, the shape of the beam, and so on. All of these steps are sort of multiplied by each other, so if fail in one place, you end up multiplying everything by zero,” says Andrey Bogdanov.

This experiment draws on the ideas presented in the works of John von Neumann and Eugene Wigner, the founders of quantum mechanics who predicted similar properties of electrons almost a century ago. Even though photons and electrons possess different properties and exhibit different behaviors, the physical laws are universal for both cases.

“We are the first to implement Neumann and Wigner’s physics in optics, or nano-optics to be precise, which is a field that manipulates light using objects of a size comparable to the wavelength of light. The idea is that several electromagnetic waves with similar oscillation frequencies may exist within the same resonator and interact with each other. If two waves have opposite phases, meaning that the crest of one wave meets the trough of another wave, they’ll cancel each other out and suppress the radiation of light from the object,” says Kirill Koshelev.

The scientists divided their study into two parts: one is an experimental confirmation of the theory expressed earlier, and the other is an example of how such resonators could be used. For instance, the trap has been utilized for a nanodevice capable of changing the frequency, and therefore color, of a light wave.

“We used a laser with a certain amount of electromagnetic energy and some of that energy was converted into a different frequency range” says Koshelev. “Simply put, the light was originally infrared and had a wavelength of about 1,500 nanometers; but having interacted with our gallium arsenide particle, it became red and with a wavelength of some 750 nanometers, meaning it became visible to the human eye. A small particle less than a micrometer in size allowed us to halve the beam’s wavelength while the efficiency of this conversion was at least 100 times higher than anything previously described. This is a record-breaking conversion efficiency at the nanoscale.”

Yet the frequency conversion of electromagnetic oscillations is not the only application for this technology. It also has potential applications in various sensing devices and even special glass coatings that would make it possible to produce colorful night vision.

“If the resonator is able to efficiently trap light, then placing, say, a molecule next to it will increase the efficiency of the molecule’s interaction with light by an order of magnitude, and the presence of even a single molecule can easily be detected experimentally. This principle can be used for the development of highly-sensitive biosensors. Due to the resonators’ ability to modify the wavelength of light, they can be used in night vision devices. After all, even in the darkness, there are electromagnetic infrared waves that are unseen to the human eye. Transforming their wavelength, we could see in the dark. All you’d need to do is to apply these cylinders to glasses or the windshield of a car. They’d be invisible to the eye but still allow us to see much better in the dark than we can on our own,” explains Kirill Koshelev.