The method allows scientists to get an image close to a holographic one in its properties but with less energy input. In theory, the method could be applied in industrial quality control or acquiring images of concealed objects, for instance, in transillumination of envelopes. 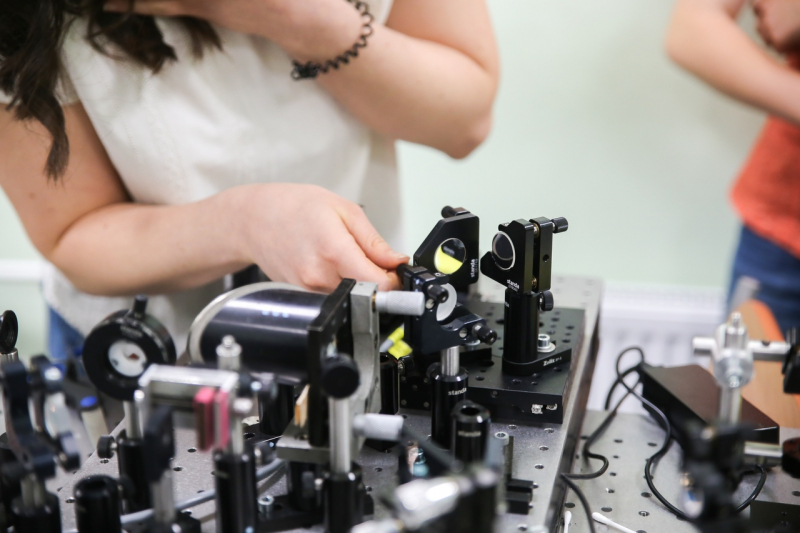 These days, we have a wide choice of technologies that allow us to make images of various objects. If you want to take pictures of yourself, a house or a beautiful waterfall, you take them with a camera. When you need to examine a broken bone, an X-ray is an excellent aid. And when at sea, you can monitor bottom topography with an echo sounder.

These technologies, however, are getting more complex by the day, and professionals need to either establish new methods of acquiring images or improve the ones already applied today. Sometimes, specialists need to get a 3D image of an object’s surface. In such cases, they use profilometry or holography. The latter technology does not only allow them to create pseudo-3D copies of objects, but can also serve industrial purposes.

Every method has its limitations and every technology can be improved or replaced with an alternative. Thus, a group of Russian and French scientists proposed a method to acquire 3D images of object surfaces, which would be analogous in their properties to holograms, with terahertz (THz) radiation. The project is brought to life by a collaboration of ITMO’s Femtomedicine laboratory headed by Olga Smolyanskaya, a research associate at ITMO’s Faculty of Photonics and Optical Information, and IMS laboratory (Bordeaux, France), and is supported by a joint grant of the Russian Foundation of Basic Research (RFBR) and the French National Center for Scientific Research (CNRS) (№18-51-16002 НЦНИЛ).

Terahertz radiation is an electromagnetic radiation that works in the frequency range between infrared and microwave ones. It opens great possibilities for researchers – from ultrafast internet connection to replacing X-ray. Lately, scientists have been experimenting with getting 3D images based on subjecting objects to Thz radiation. The Russian-French research group succeeded in acquiring such a pseudo-3D image.

“In this project, we used Thz radiation and a special method that allowed us to retrieve the wave phase,” explains Nikolay Petrov, co-author of the paper, head of ITMO’s Laboratory of Digital and Display Holography. “What is it? If we imagine waves on a water surface, then a phase is the distance that one part of the wave moves in relation to another. Let’s say that this wave is reflected from an object, like a stone embankment with a small lump. A smooth wave hits the embankment, but it doesn’t come back as smooth as before because a certain amount of water met the lump before the rest of the wave hit the embankment. This way, the reflected wave contains information about the lump. In our work, the principle is similar: by retrieving the wave phase we can reconstruct the topography of the surface that it was reflected from.”

Researchers subject an object to electromagnetic waves in the THz range and then with special sensors register the energy distribution formed after the radiation interacts with this object. Then, using a special software based on a mathematical procedure of data processing they can get information about the object’s surface from this energy distribution.

The main advantage of this technology over the already existing alternative method of THz holography lies in saving the power of THz radiation. This is achieved by only using one beam and not two, which is frequently required for holograms.

“In our method of phase retrieval, we register the diffracted field, which is the distribution of intensity of waves, reflected from an object,” expounds Nikolay Petrov. “As a rule, holography uses an additional base wave, so that the hologram is formed as a result of an interaction between the base and object waves. By leaving only the object wave, we have the opportunity to use the little amount of THz radiation energy that we have more sensibly and direct it all at the object.”

The researchers had to work really hard to succeed at acquiring these images in the THz range as the radiators operating in it are still comparably low-powered. To compensate for this disadvantage, the group proposed the technology of registering in the high-dynamic range (HDR).

“THz radiators are not powerful enough,” says Adrien Chopard, co-author of the paper, “So we need to provide for certain measures to have the proper capacities for image construction: using a single-pixel detector functioning in the HDR to minimize the noise level of the measurements led to a significant rise in sensitivity.”

The technology can have various applications. For instance, it can make it possible to get 3D images of sample pieces at a manufacturing site and then load it into a quality control system, so that the produced parts can be compared to the sample.
Just like holography, this technology can be used to study a wide range of objects – biological, technical and even pieces of cultural heritage, such as paintings. There is one other advantage that sets this technology apart from other visualization methods operating in the optical range.

“A lot of dielectrics are transparent to THz radiation,” explains Nikolay Petrov. “As the radiators in this range become more advanced, we will be able to acquire images hidden by obstacles, such as paper wrappings or gypsum boards.”

“Not only can THz waves only extract information about objects through visually non-transparent obstacles, but they also do not require any other optical elements, which makes this method easier to apply,” adds Jean-Baptiste Perraud, another co-author of the paper.

The article is published in Optics Letters.