The participants of the First Grant Competition Contest presented their solutions for real industrial tasks offered by companies of the Joint-Stock Financial Corporation "Sistema." 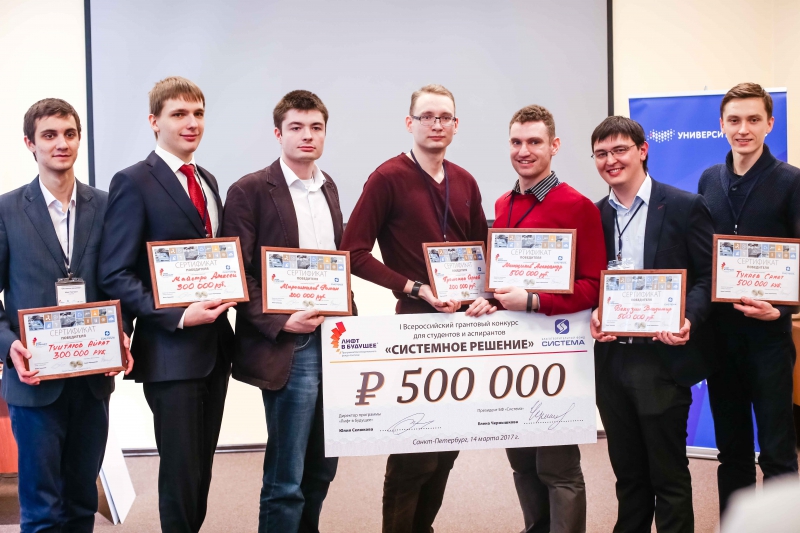 The First Grant Competition "Systemnoe Reshenie" [System-based solution -Ed.] was organized by the youth support program "Lift to the Future." ITMO University and Moscow Polytechnic University were the main partners of the competition.

The prize fund of the contest was 8 billion rubles; each winner was able to win up to 500 thousand rub. Students and PhD researchers who took part in the competition presented their solutions for cases made by the MTS mobile operator, "Sistema," "Segezha Group" as well as other companies.

Some 90 projects by students and researchers from 38 Russian universities were part of the semi-finals. The jury selected 39 teams that presented their solutions in the finals, which included two rounds — in St. Petersburg and Moscow. Each team had only ten minutes to prove that their solution is worthy of being sponsored.

According to the participants, the main difficulty was that cases had no "ready answers." Teams had only several months to create a development concept, cope with complicated engineering tasks and make a business model. Sergei Gromeniuk, ITMO’s Master’s student and one of the finalists of the contests, spent four weeks making a model of a navigation system for self-driving motor boats which can detect infringers on water. Sergei worked on a project in collaboration with his colleague and Master’s student, Alexander Moreev.

"Mostly I am interested in robotics. That is why when I saw this case I thought "We will definitely make this motor boat!"…I already have experience in development of systems for self-driving vehicles control. When I was looking for someone to work with, Alexander offered immediately," notes Sergei Gromeniuk.

Sergei and Alexander offered a double enemy detection system. Its first element is a hydroacoustic detection system including a passive multielement antenna. Another element is an artificial vision system, which allows detecting objects that are both under and above water. The passive antenna makes it possible to make a system undetectable. According to the developers, this development is autonomously controlled.

The authors of this project received 200 thousand rubles for improvement of their project. According to Yulia Seliukova, head of the All-Russia Educational Program Lift to the Future, this contest showed that first-year students can easily compete with PhD students — even if they lack some professional competencies, they are able to offer a better business model.

"Such competencies detect the following problem: when a team consists only of engineers, it is hard for them to solve business tasks and deal with marketing. They are sure that it is enough to be versed in programming and physics but the task is more complex — they need to turn an idea into reality. That is why we want them to convert their projects into startups and ready-to-use products. It is necessary to teach entrepreneurial skills to them." says Ms. Seliukova.

According to Yulia Seliukova, it is necessary to start teaching engineers how to be businessmen from the very beginning of their studies. Today it is very important even for engineering career to have so-called soft skills.

According to the research made by the Odgers Berndtson company, soft skills are extremely important, so they have to become a part of the engineering background. As of now, a successful R&D engineer has to obtain fundamental knowledge, apply it to the practice, deal with lots of data, be good at modern technologies, solve tasks in a creative way, know the basics of project management and be responsible for the result.

Next year, the organizers of the competition plan to increase the amount of cases by hi-tech companies as well as offer participants new tasks in the field of marketing and economics. It is also planned to divide the contest into two parts: participants will solve cases and also compete for a project grant by presenting their own ideas.