In the next ten years the Russian nanoindustry will be expanded with five new technological clusters. These are: windpower, solid-waste recycling, flexible electronics, industrial energy storage and nanomodified material. They will join the six clusters that have already been established in Russia since 2007. Anatoly Chubais, head of “Rusnano”, spoke about this at an open lecture in ITMO University. During the talk he analyzed the development of the Russian nanoindustry over the last ten years and gave his forecast on the industry for the upcoming 10 years. 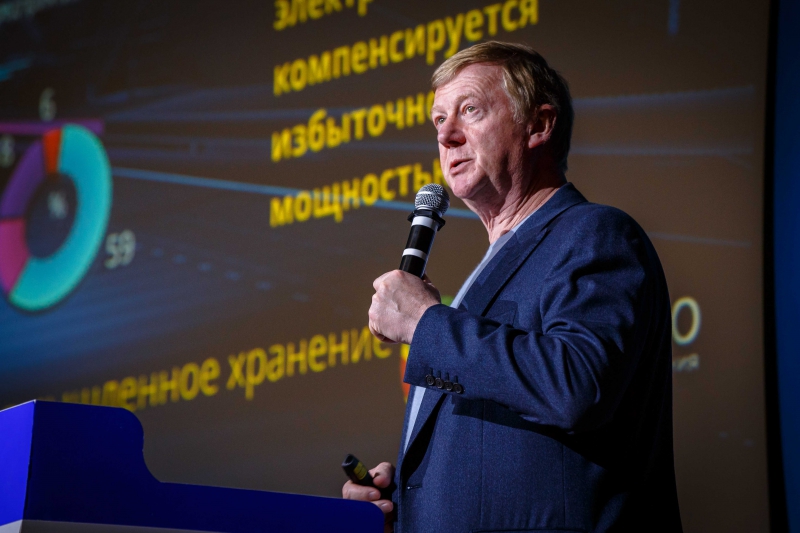 The head of “Rusnano” began his talk by explaining to the audience that the company’s purpose is commercialization of nanotech inventions and developing them into full-fledged enterprises. “Rusnano” does not invest in R&D, but instead acts as a financial co-investor for projects that have a substantial economic potential.

As per Anatoly Chubais’s words, all those projects belong to the six existing clusters that have become a part of Russian nanoindustry in the last ten years. Among such clusters are nanoelectronics and photonics, coatings and surface modification, advanced materials, innovative nano-biopharmaceuticals, nuclear medicine and solar energy.

Mr. Chubais used that term to describe these clusters that were built almost from scratch in the recent years and have a great potential for growth in the next ten years. For instance, several companies are working in the nanoelectronics and photonics cluster. Those are: IRE-Polus, a plant in Fryazino that manufactures commercial lasers; NeoPhotonics Corporation, from Moscow, develops and manufactures photonic integrated circuits and various models and subsystems; Mapper Lithography Holding B.V. project which is expected to finalize development and begin production of lithography equipment with a resolution of 22 nanometers and higher.

As a whole, the Russian market size for nanoelectronics and photonics amounted to 7.7 billion rubles last year and is expected to rise to 20 billion rubles by 2027.

“Objectively speaking, of course, it needs to be understood that, on a global scale, we shouldn’t expect some sort of a miraculous breakthrough. Yes, microelectronics exist in Russia, and so do nanoelectronics. And yes, it will develop, but we don’t see it reaching the levels of Silicon Valley, Taiwan, China or the like. Although we will absolutely continue investing in this field,” – comments Anatoly Chubais.

The cluster for new coatings and surface modifications will develop much more actively. The Advenira company involved in production of sol-gel coatings recently received investments from Rusnano and is now beginning to develop their technology in Russia. Another organization, formerly Rusnano’s portfolio company, “New Instrumental Solutions”, manufactures monolithic hard-alloy machine tools with nanostructured coating using technology developed at Kurchatov Institute. “Rusnano” recently sold their shares in the company with an IRR of more than 26%.

“There are others game-changing companies, too. The “Novomet-Perm” company is a classic success story: they produce and operate submersible mining equipment for oil industry. They have a 3% share of the world market and large companies, including several Russian ones and the well-known Haliburton, are currently fighting for control over it. The latter has offered a price that is six times that of our investment in the company. We’re selling our share right now and we’ll see how that works out.” – says Anatoly Chubais. Another cluster that already exists in Russia is that of advanced materials. They are used not only in space and air industries, but in construction, too. Its market volume in 2016 in Russia is 995 billion rubles, and, according to “Rusnano”, may reach 2.6 trillion rubles by 2027. Mr. Chubais also believes that the pharmaceutical market, including nano-biotech and nuclear medicine will also be in active development.

“Last year the Russian pharmaceutical market grew by 11%, even though our GDP has been in decline in recent years. This is the most fast-growing market in our country, but not many notice that. Its global rates are high, too: it grows 5-6% a year, while nano-biotechnologies grow by 11-17% a year. Of course, we’re planning to continue investing more and more in this field.” – he comments.

Solar energy industry is another cluster that is already up-and-running. It began with the launch of the “Hevel” plant in Novocheboksarsk where, based on processing lines adapted from Oerlikon Solar company, thin-film with efficiency of 9% was manufactured. Similar work was also conducted with the Ioffe Institute, whose experts created a Russian-made solar panel with efficiency of 21%.

“There is a great deal of government support for this industry. Today solar energy is a solid business. The solar panels made at Ioffe Institute have passed lab and bench testing; this April we’ve begun production of Russian solar panels that can rival the best foreign counterparts. The plant’s efficiency has also been given a boost and we plan to begin exporting the panels in future,” – he comments, adding that the company has already started negotiations with Iran.

That is the name given at “Rusnano” to new clusters that are expected to emerge in Russia in the next ten years. Anatoly Chubais describes five of them: windpower, solid-waste recycling, flexible electronics, industrial energy storage and nanomodified material.

The current total power output of all wind installations in Europe is 154 gigawatt. The world total is 500 gigawatt. Russia has serious plans for this industry, too, emphasizes “Rusnano”. The company has recently paired up with Finnish company Fortum to create a windpower development fund for 30 billion rubles and plans to attract a further 70 billion rubles to construct wind farms in Russia.

“This includes the manufacture of all components in Russia, the key element being the blades. It is a complex part, comparable in difficulty of production to a plane wing. We’re going to manufacture them in Ulyanovsk using facilities of our partner company “Aerokomposit”. “Rusnano” and “Rusatom” are participating in development of windpower in Russia.” – says Mr. Chubais.

Another new industry that, according to head of “Rusnano”, will form by 2027 is recycling of solid waste into electric energy. By now the total area of junkyards in Russia amounts to almost 50 thousand hectares – the size of a small country, while the volume of waste there is over 30 billion tons. Some countries, like, for example, the neighboring Finland, have turned their waste into fuel for a booming industry. Modern waste recycling plants use a wider range of technologies such as pyrolysis, arc gasification and others.  “Rusnano” and “Rusatom” are planning to cooperate with one of the world leaders in this field, Hitachi Zosen Inova AG, in adopting this new industry in Russia.

“We plan to build five plants overall; the initial two plants will be situated in Moscow Oblast and in Tatarstan, their flow capacity being 700 thousand and 555 thousand tons per year, respectively. A government support program is lined up for the project, like in Scandinavia or the rest of the world. We hope to begin construction of Russia’s first waste incineration plant by the end of the current year” – says Anatoly Chubais.

The third cluster is that of flexible electronics. The global market size for it currently amounts to 12 billion USD and is expected to reach 44 billion by 2027. “Rusnano” has acquired a 100% share in the Flex Enable start-up whose portfolio includes more than 140 patent families.

“We’ve made a decision to create a Russian center for flexible electronics at the Technospark nanotech center in collaboration with the government of Moscow. We understand well the process tasks and product ranges, so we believe that this center will be a launching pad not just for us, but for all prospective manufacturers – from start-ups to major players,” – comments head of “Rusnano”.

Industrial energy storage and nanomodified materials are two more clusters Anatoly Chubais believes will become part of the Russian industry in near future. The former will be jumpstarted by a new plant for production of lithium-ion batteries in Novosibirsk, while the latter is represented by the OSCiAl plant, also in Novosibirsk, that will begin production in 2018. It will manufacture a new industrial unit named Graphetron 50 with a production efficiency of 50 tons per year.