This year, ITMO University hosted the third winter school “It’s Your Call!” for participants of the “I am a Professional” student competition. Sberbank served as the general partner of the school that annually brings together students from all over Russia. The school consists of workshops, lectures and tours of major companies and research institutions. Last week, the participants went to Laser Systems, a high-tech company based in Strelna. There, they discovered how lasers can help make flights safer and detect the level of someone’s alcohol intoxication and saw a 3D printer working with metal powders. 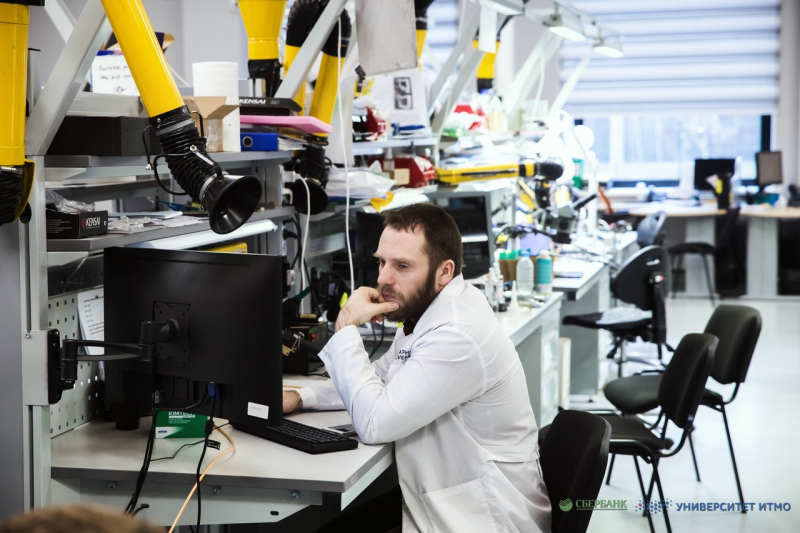 The Laser Systems tour for the winter school

Laser Systems, located in the suburbs of St.Petersburg, is a black two-story building which miraculously has enough space to fit in all of the production and offices of the company including test labs and sales department. This unique place brings together new industrial 3D printers, lasers, cutting-edge software and space exploration technologies.

First, the participants head to the electronic devices assembly department – or rather a live assembly line, where engineers work side by side, each responsible for a certain part of the final product.

“Our devices are one of a kind and we don’t make millions of copies, so it wouldn’t be cost-effective to invest in robots to automate the production process,” explains Alexander Shirmanov, an engineer. “Our staff usually can do everything from assembly to set up, but we try to organize things so that each of us mainly covers one stage of production and we don’t have to switch all the time. For instance, I am usually responsible for optics.”

This unusual assembly line produces a number of devices working with the company’s primary technology – lasers. Here, these are used to detect alcohol intoxication levels and measure cloud altitude as well as wind speed and direction.

The color of alcohol vapors

One of the most popular products created in this room is the Alcoframe breathalyser – a portable device slightly bigger than an average-sized laptop, capable of detecting alcohol intoxication levels in the blink of an eye. According to Olga Sazhina, a representative of the company’s press service, the device is designed to identify intoxicated people in large crowds, for instance, at a production facility entrance.

“Alcoframe is based on the ethanol absorption spectrum. A person exhales onto a laser grid created by laser beams reflected off mirrors. The device then processes the information and decides whether to let the person in,” explains Olga Sazhina. “Alcoframe is accurate to 0.1 per mille, and the processing only takes a second. First generation Alcoframes were a success and we are now working on the next generation.”

According to the developers, the tester can’t be fooled. Test results are stored in a database and could be sent to a department manager or security if needed.

Laser pointed at the sky

In the very same room, light is used to determine wind direction in various cloud meters and wind lidars developed for airports. It takes around a month to assemble such a device and the company has produced 20 of them in total.

“Lidars help measure wind direction and speed, while cloud meters measure the altitude of the lower cloud boundary,” explains Alexander Shirmanov. “The latter simply sends up a laser beam and catches its reflection from the clouds. Lidars focus on a certain altitude and catch the scattered reflected signal. After that, they measure wind direction and speed based on the Doppler effect. As a result, a 3D wind map is created.”

For a complete wind analysis, every takeoff runway should be equipped with a lidar. It means that an average airport will need around three such devices.

“The most hazardous thing to happen to a plane is a rapid wind shift during landing or takeoff,” continues Alexander. “A plane has both absolute ground speed and wind speed. If the wind is too strong in the tail of the plane, the wind speed and carrying capacity will fall making the plane lose several dozens of meters in altitude. That is why it’s important to monitor wind changes.”

Up next on the tour is the developers’ office, home to Laser Systems’ new products and software, a room full of ideas. While some are deep in code or calculations, others are having a well-deserved break over an IQ puzzle.

One of the products in development is a multifunctional virtual simulator for astronauts and cosmonauts who work at the International Space Station (ISS). This five-module software suite allows them to practice spacewalking multiple times before actually performing it.

“Spacewalking operations usually last around eight hours. It’s a gruelling experience that leaves the astronauts completely exhausted,” explains Timofey Sukhov, the head of the management systems office. “Our system will help them prepare for every step of this challenge. Right now, it is a complicated process, involving a lot of planning, iterations and hours of practice at a weightless environment training facility. It would be great to make this process easier while also giving astronauts an opportunity to practice.”

The system is equipped with a text-based editor that will automate onboard checklist compilation. Then, following the checklist, engineers can test the way an astronaut is meant to walk through using VR gear with a precise model of the ISS with all of its controls and wires. The students had a chance to experience what it was like to try and hold on to a small handle hundreds of kilometers above ground.

In the future, after a route is tested in the simulation, it will be sent to the station equipped with the same gear – a laptop and a VR headset. These will allow astronauts to practice and remember every detail of each block’s surface. Another software module will send animated data on astronaut activity back to the ground during extravehicular activity (EVA). Finally, the last module is what the engineers here call “a pocket ISS wikipedia”.

“It’s a tablet with a database on every EVA ever performed,” adds Timofey Sukhov. “It’s an important device, as people tend to forget what is located on the outside.”

As students were finishing their tour they were met by another surprise – an industrial 3D printer that uses metal powders instead of polymers ubiquitously used for this technology. The device has recently received the ST-1 Certificate of Origin and is now made ready for mass production.

Printed metal parts from stainless steel, aluminum, titanium and other alloys possess an outstandingly low porosity of only 0.02%, which cannot be achieved by any other production method.

“One of the advantages of this technology, apart from its price, is production speed,” explains Dmitry Vasiliev, first deputy head of the company. “Let’s say you need to produce 5,000 airplane engine blades. Developing and manufacturing a press die for them will take around twelve months and another six months will be needed for error detection. In total, you will get your blades after a year and a half. Whereas we can do it in a month. Naturally, it is still better to use the first option if you need to produce millions of blades, but for small to medium series, our technology is worth looking into.”

On their way back to St.Pete the students shared their experiences of the tour.

“The spacewalk simulator impressed me most, it was interesting to learn how it is made,” says Nikita Paznyuk, a student at Tomsk State University. “Seeing what people do and how their work is organized made me realize what I can expect at my future workplace. It was a new experience.”

Still, simulated spacewalks were not the only thing to surprise students in Strelna.

“I really liked the 3D printer, as I’ve never seen one that could work with metals before,” shares Olga Vlasova, a student at ITMO University.

Furthermore, many participants wanted to know how to land a job at Laser Systems after graduation.

“The software development department stood out for me’ I learned a lot,” tells us Sergey Starikov, a student at Perm State University. “Such tours are also great for scouting potential employers, as it is something you start thinking about when you enter a Master’s program.”

The winter school “It’s Your Call!” was held at ITMO for the third time this year with Sberbank serving as its general partner. Apart from tours of production sites, the program included lectures and workshops by university professors and representatives of major companies.