Relocation, Accelerated Training, and Comfortable Workplaces: Ways of Addressing the Lack of IT Specialists in the Labor Market

80,000 IT specialists graduate from Russian universities each year, but even this is far from enough to cover the market’s demand. How to make up for the lack of IT workers and stop them from emigrating? What are the prospects of IT labor market development? HR directors of IT companies, St. Petersburg local government officials and universities representatives have addressed these questions during a panel discussion at the ‘Gigabytes of Offices’ conference. 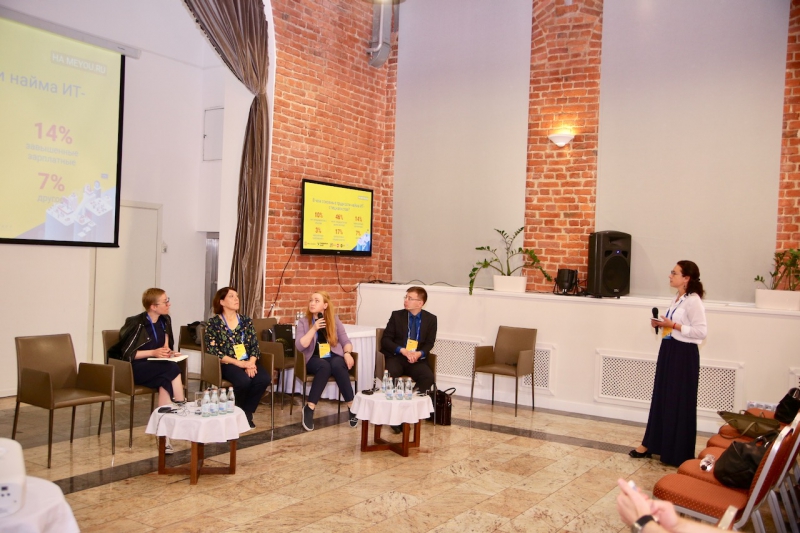 The discussion, entitled ‘IT labor market: recent trends and prospects’ was opened by Julia Sakharova, the North-Western region department director of Russia’s HR giant Headhunter, who started her speech with unveiling current IT labor market statistics. While the average data for the Russian labor market on the whole indicates that there are seven candidates competing for one position, situation at the IT labor market looks very different: for instance, there is only one candidate per each Java developer job posting. In 2017, 23,3 % of all CVs posted in St. Petersburg were IT-related; in Moscow this amounted to 45,2 %.

In the beginning of 2018, the number of IT positions grew by a quarter in comparison to the previous year. The number of IT-related CVs that were posted, however, only grew by 12 %. Therefore, despite the industry’s popularization efforts and high demand for hard sciences programs among university applicants, the competition for programming talent only becomes more intense.

“Thanks to the presence of leading IT universities, geographical proximity to Europe, attractive salary levels, and comfortable living conditions that the city offers, St. Petersburg has one of the biggest IT-clusters in Russia. Whereas before the demand for programmers only used to come from IT companies, now IT specialists are needed in banks, agricultural sector, manufacturing and many other industries. For example, among the most wanted specialists are data analysts, but they are the ones that the labor market severely lacks”, explained the Headhunter North-Western region department director. “Apart from tech skills, employers in the field of IT indicate that they need independent workers who can manage projects and have good teamwork skills.”

Nexign HR director Olga Dobryakova also noted that the competition for IT specialists is spreading to other industries and will only intensify in the next 20 years due to the all-encompassing digitization process.

“To attract and retain workers companies need to not only offer candidates interesting projects to work on, but also help them envisage their full career trajectory within the company so that they understand the prospects that await them. Moreover, we mustn’t forget that raising capable and experienced IT specialists takes 5 years at least,” Olga Dobryakova observed.

Nexign HR director also remarked on the continuing problem of Russian IT specialists emigrating to other countries because of better living conditions. However, another speaker, JetStaff development director Elena Kolkova noted that not everyone is ready to make the big move.

“From the get-go, candidates demand that they are given as much information about their future job as possible. Many candidates are used to part-time work with flexible hours. Some look for comfortable working environment: a well-equipped office, a nice workplace, a parking for their bikes and so on,” Elena Kolkova commented.

IT education for everyone

Nina Yanykina, Head of ITMO’s Project Management and Innovation Department and Dean of the Faculty of Technological Management and Innovations, indicated that from the 80,000 IT specialists entering the job market each year, 20-30,000 graduate from universities, 20-30,000 hail from other educational institutions, 15,000 come to IT through professional retraining, and the remaining 7,000 arrive to Russia from abroad. At the same time, the market needs fluctuate between 120,000-186,000 specialists each year.

“Programming is now becoming a universal technology for all industries out there. All students, irrespective of their major, should be taught the basics of programming. It is also necessary to develop the system of extended education, as well as the system of accelerated IT training. This way, a graduate will have the experience of extended education and internships, in addition to their diploma. Moreover, we at the Faculty of Technological Management and Innovations are currently working on expanding the disciplines on offer; for example, we have business informatics, as well as IT consulting, and we plan on adding programming to the curriculum. By doing so, we can start graduating data analysts,” Nina Yanykina explained.

Ms. Yanykina also spoke about the nationwide attempts to address the lack of IT specialists, which include creation of the University as part of the National Technology Initiative program, as well as IT companies’ efforts to connect with schools, as demonstrated by the Mail.ru Group’s ‘Digital heroes’ vocational counseling project which helps school students find their way in IT. The company also developed online programming courses for school teachers and their students. According to Julia Sakharova, there are even cases of IT companies hiring school students from the St. Petersburg’s School № 30, a prominent institution specializing in teaching Maths and Physics. The pool of talent isn’t getting any bigger, so companies should start competing for potential employees when the latter are still in school, Julia Sakharova warns.

“Universities and government officials cannot solve the IT staffing problem without employers. Every IT company can make it possible for school students to visit them, take a closer look at the profession, experiment with coding. But employing companies are often closed off even from university students,” adds Nina Yanykina. “As for the high competition for university places, ITMO University attempted to address this by launching the ITMO.STARS program, which allows highly motivated prospective students with unique achievements to be accepted to the university even if their national exam scores aren’t high enough.”

St. Petersburg as an IT-cluster

Nikolay Rogachev, deputy head of the Committee on Labour and Employment, presented the new government initiative for motivating IT specialists to move to St. Petersburg. Companies that are part of the ‘Information technologies, radio electronics, appliance engineering, infotelecommunications and communication facilities development’ innovation cluster, to which ITMO University also belongs, can now apply for government subsidies to fund relocation, salaries, or housing rent of IT specialists sourced in other regions. Subsidies are distributed based on the results of a competitive selection process if a salary of the specialist in question is going to be no less than 150 000 roubles per month. As part of the new scheme, St. Petersburg local government is ready to make up for 30 % of the expenses for an overall amount of up to a million roubles per one specialist. In total, the government has allotted 99,6 million roubles for IT talent relocation.

“This initiative is not the latest whim of government officials, it is what the professional community actually needs. We understand that the labor market is severely lacking in specialists and universities cannot currently answer this demand on their own, especially given that every new specialist needs a couple of years to grow professionally. Helping companies relocate IT specialists to St. Petersburg is one of the possible solutions,” Nikolay Rogachev explained.