IPChain Hackathon: How to Manage Intellectual Property from a Smartphone

IT products and services are one of the world’s largest and fastest-growing markets. Sophisticated and effective solutions in the field of software development are as valuable and sought-after as ever. But authors of such solutions don’t often think about their rights to the intellectual property they created, and the issue of exercising these rights is almost never on the cards. In a bid to modernize the sphere of software development, the IPChain Association joined forces with ITMO University to host a hackathon for developing the best mobile app for mathematicians and programmers intended to bring about radical simplification of managing intellectual property rights on algorithms and elements of software code. 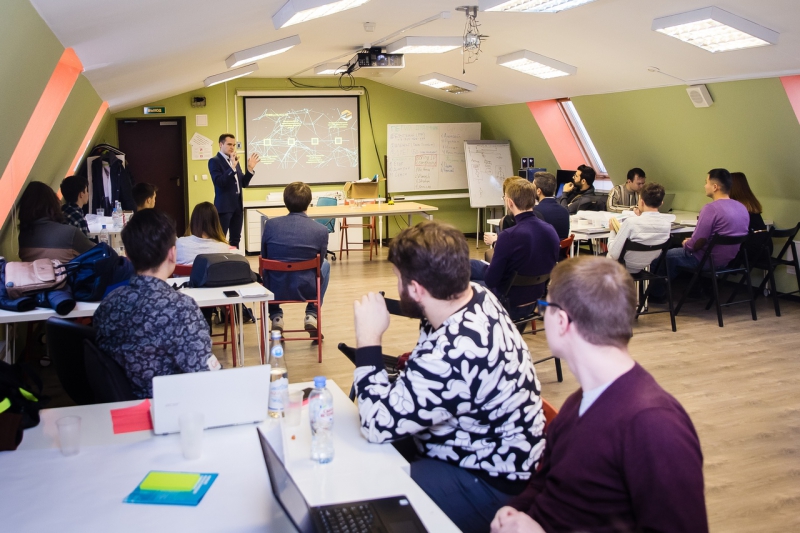 The IPChain network is a distributed ledger housing transactions with rights and objects of intellectual property. Whatever the result of intellectual or creative activity, algorithms and software code included, the network records the facts of their creation and authorship, giving creators the opportunity of using these not only for protecting their ownership rights, but also for managing the latter: for example, by passing the rights onto their employer or selling them to the third party. Every digital object can be stored on the servers or computer of its author, or stored in a depositing service such as N’RIS. But an IPChain-recorded transaction housing a short description of the object and its hash codes offers creators an additional advantage of using it for protecting their intellectual property rights. IPChain is enhanced by other services which automatically check the object for plagiarism and identify its newness. This raises the value of the object created, providing buyers with guarantees that they’re purchasing a unique solution. The distributed ledger is also complemented by services that help authors and intellectual property owners yield profits from digital transactions.

Hosted by the Association at ITMO University, the recent hackathon was the first practical event under the framework of the collaboration between IPChain and ITMO. It was aimed at finding a technical solution to be integrated into the distributed ledger of digital transactions. Participants were tasked with developing an operating prototype of a service that would allow users to upload the data on algorithms and software codes that ensure their implementation into IPChain. These prove especially valuable for the University, says Alexander Atrashchenko, advisor to ITMO’s Vice Rector for Research and one of the event’s organizers, because these results of intellectual activity are important both for students and graduates. Even the tasks of the ICPC competitions come in the form of algorithms which can too be deposited into IPChain for recording and managing one’s intellectual rights.

Among the hackathon participants were ITMO University students from different professional fields, from programming and design to sales. They started the day by discussing the upcoming trends in the digital intellectual property market with the president of the Intellectual Property Federation Sergey Matveev, who expounded on the importance of involving students in the development of the intellectual property market, both as participants and service creators, in a conversation with ITMO.NEWS.

What makes the services building upon the IPChain network so significant?

All the products and services we buy and use are woven from quantities and quantities of protected intellectual property, ranging from technological solutions, scripts, musical compositions and code to trademarked designs. Intellectual property usually undergoes a lot of transformations, improvements and engineering tweaks before it reaches an end consumer as part of a finished product. Recording every step of this transformation chain ensures that all the people who contribute to the process receive a fair compensation for their efforts. This is very important: if authors aren’t remunerated, our economy will plummet because the digital economy of the new era rests upon using the results of intellectual and creative activity. It is them that give rise to end products, goods, and services.

The intellectual economy of today is topped by a dozen of countries which can be divided into two groups: those who have a deep-rooted, age-old culture of private intellectual property management (the US, the UK, France, Germany) and those in which such a culture is still developing. Singapore, Australia, South Korea are actively building digital services which allow, on one hand, to lower the costs connected with licensing and protection of intellectual property rights, and, on the other, to quickly establish the ground rules for market participants.

The strategy Russia needs to follow is obvious. The private intellectual property culture here is but a nascent one; a modern intellectual property model entered our law only ten years ago, and this is too short a time for the institution of intellectual property to become a basis of economic and social relations. Hence our only way forward is a digital one; we should set out by developing the services that lower transaction costs and allow for legal and effective managing of all kinds of intellectual rights, from copyright to patent law.

Which implications does this have for ITMO University?

A higher education institution that trains specialists for the software industry but isn’t equipping them with intellectual property management skills wastes time, money, and resources, including the intellectual resources of its students and staff. In parallel to nurturing the culture of private intellectual property in students, the University can and should create services allowing future specialists, be it programmers, mathematicians, or analysts, to record their rights, introduce the latter on the market and claim remuneration from others using them. It is especially important because if ITMO is to go on training highly skilled developers and software engineers without providing them services with low transaction costs, all these professionals will simply leave for other jurisdictions.

And this is as easy as it ever has been. In the ’00s, everyone spoke about the problem of the brain drain. Nowadays, specialists don’t even need to physically leave the country; they have the opportunity of launching and commercializing their intellectual property on global digital platforms. This is the same brain drain but in a different form.

What role does the IPChain hackathon play in the process of market modernization?

In the center of our hackathon was a very interesting concept: we delegated describing and managing algorithms to those who create them in the first place. It’s only natural that the owner of an intellectual property product should define how their rights are recorded and managed. But such cases where standards are formulated inside a field by its young representatives, and not imposed upon from the outside in the form of state requirements and services, are rare.

I made a point of asking the participants whether they had ever tried to turn their software solution into a patent application. It turned out that none of them did: they were confused by the arcane language of invention formulas. But you can’t go anywhere without knowing how to write these formulas. This is why, as a result of the hackathon, participants not only came up with algorithm description methods but also invented ways of defining the novelty of the solutions offered, as well as of translating block diagrams and descriptions from formal languages into the invention formula. We still have a long way to go in terms of full-fledged results, but the beginning is more than reassuring.

The best solution was offered by the Sugrob team. The students presented a sophisticated interface powered by a simple method of algorithm description and implementation in a programming language, as well as an effective technique of defining the novelty of an intellectual property object quickly and with minimal involvement of experts.

“The students will continue working on their prototype at ITMO’s Convergent Innovations Center, which will house the University’s IPChain chapter and offer the conditions needed for advancing the project work conducive to the development of IPChain’s ecosystem and formation of a well-functioning digital intellectual property market,” commented the director of the Convergent Innovations Center Alexander Dorofeev.

According to the hackathon’s co-organizer and advisor to ITMO’s Vice Rector for Research Alexander Atrashchenko, the University is interested in creating its own ecosystem of startups based on ITMO’s own intellectual property objects.