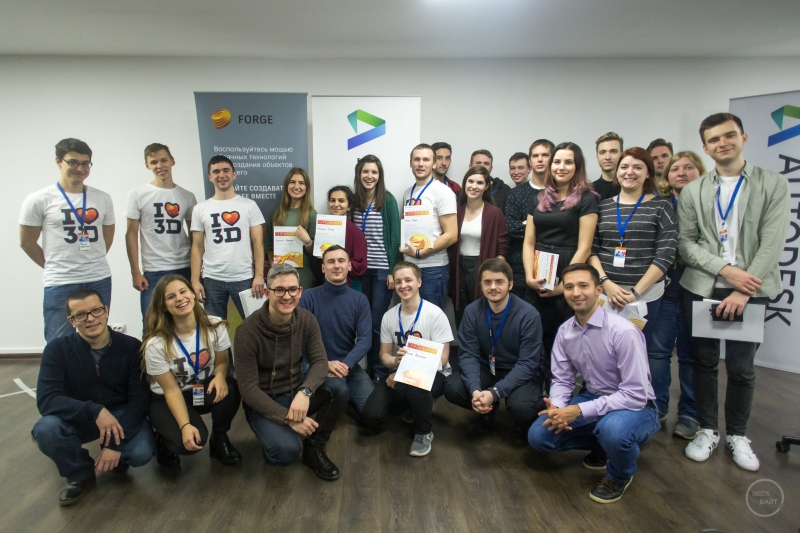 Participants were free to come up with their own ideas or pick one from a list of relevant cases compiled by the event’s experts. Seven teams took part in the hackathon – six came to ITMO University, while the seventh participated remotely from Moscow.

In their work, the teams had to use Autodesk Forge – a software suite of cloud-based services that combines design, engineering, visualization, collaboration, production and use of working processes. Its API and SDK allow small and large companies alike develop user-friendly applications and services. As part of the hackathon, teams focused their efforts on all kinds of problems. For example, the team Little Soft has developed Toy Maker – an interactive toy construction app that lets customers at online stores create custom toys the way they want them. This was the team’s way of solving the issue of interaction between customers and online shops, which the team believes is too boring in its current state; users can only interact with select bits of information and pictures which are not enough to provide full information on the product.

Another team, called 1:1 BIM, decided to solve the issue of tracking the cashflow for investors who contribute to construction projects. They have developed an application that works as an investor’s pocket assistant and lets users avoid sifting through a great deal of paperwork. The app provides a summary of cashflow trajectories and lets investors see whether some funds have been lost or if they were used for their intended purpose.

The team from Moscow Polytechnic University presented a web-based service for car dealership employees that lets them communicate with each other, as well as to easily find registered cars or use 3D models of car parts to make orders for parts their clients require. This is a much-needed solution, as today a lot of car-related info is stored in 1C accounting software, which is not capable of storing all the necessary information. At the hackathon, ITMO University was represented by not one, but three teams. The team UNIOS, made up of students from the Faculty of Infocommunication Technologies, developed a project for a company of the same name. The students created an Internet-of-Things (IoT) platform that lets users monitor the state of remote devices at industrial plants. Over the three days, team members have managed to connect objects shown in the software to their corresponding sensors and add the buildings’ models to the program. The team received assistance from ITMO University’s FabLab.

“What’s notable about this particular case is that this is an example of an ITMO graduate helping students using his business expertise. Together, they are working on a useful product that will later be used at the graduate’s company. The companies that have given cases to the hackathon’s teams will be able to continue the development of their prototypes at the Convergent Innovations Center. During the hackathon, students have done well to show off the capabilities of Autodesk Forge software and its use in construction-related IoT tech,” – explains Alexander Dorofeev, head of ITMO’s Convert Innovations Center.

The issue is that, when constructing panel buildings, most of the processes are dependent on the crane, as it is the most crucial part. The construction is only as effective as the crane is, which is why it needs to be used to its full potential and not left idle. As a solution, the developers decided to create a real-time construction management system and connect the foreman, the stock-keeper, the head of project and, of course, the crane driver, into a single network. ”First, we have the head of project. Initially, the screen is empty save for the task at hand – a building with a specific number of panels. The foreman chooses at which floor work will be done on a given day and picks the corresponding parts. Pressing the “send to warehouse” button, the foreman directs the order to the store-keeper, who checks them for availability and prepares them for installation. Meanwhile, the crane operator receives information on the upcoming work. Once a panel is installed, it is marked in the system as such. This way, while the panels are being installed, the project head can see the building come together on the screen in real time. This ensures transparency and makes work easier,” – explains team member Alexander Popov.

The team also plans to add an additional interface for project heads, which would display statistics and infographics to show how many panels are being installed per day, with the weight, size, etc. being taken into account. Among the team’s other plans is to make the panels change colors to indicate their status, let users order new materials from the store-keeper, make the panels sortable by coordinates and implement the design developed by the ITMO student. The jury consisted of three experts from Autodesk – Yaroslav Reshetnikov, Elizaveta Chapygina and Alexander Ignatovich – two external programming experts (frontend and backend) and Anton Suprun, deputy head of the Department of Network and Cloud Technologies. The members of the winning team each received an iPad mini from the event’s sponsor. In addition, all participants received certificates, souvenirs and keepsakes.