ITMO Hosts MemoryHack: New IT Services for a Project About Veterans

Due to the pandemic, every grand public event, including Eurovision, Wimbledon and the Tokyo Olympics, has been cancelled. The many online competitions, on the other hand, have grown even more popular. For instance, 113 programmers and web-developers from all over Russia took part in the MemoryHack remote hackathon. According to the event organizers, they have received five times more applications than expected. The participants had 36 hours to design new services for Memory Road, a project about the veterans of World War II. Among the winners of the contest are ITMO University students, who told us about their projects and impressions of the online hackathon. 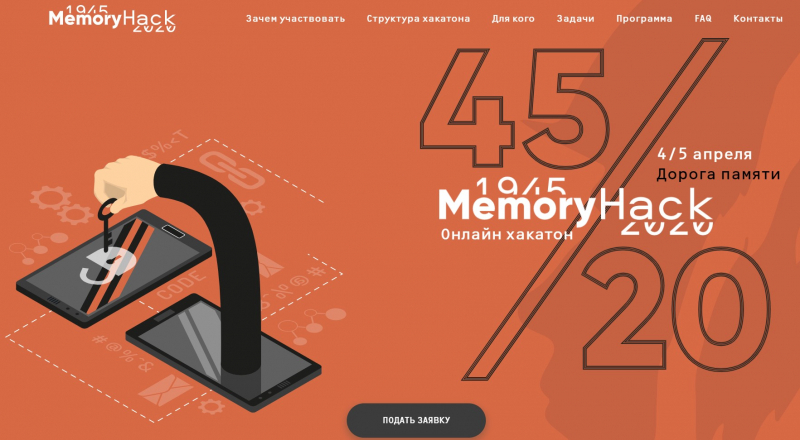 MemoryHack: a hackathon with noble goals

MemoryHack is an online hackathon that took place on April 4-5. The event was organized by Phystech.Genesis startup and Russian Hack Team with support from Promsvyazbank.

The competition had two tracks: a program for parsing and moderation of pictures of WWII participants, and a service that would motivate users to upload their pictures of the veterans to the Memory Road web-page. Each track had a 250,000 rubles prize fund.

Apart from the actual development and meetings with experts, the hackathon included a lecture on big data by Igor Ashmanov, a specialist in the field of AI, and a workshop on delivering good quality presentations.

The teams needed to introduce a new angle along with new ideas. They had to come up with services that would make Memory Road more user-friendly and functional. Some projects that were chosen as best at the end of the competition were personal postcards with pictures of veterans, medal recognition by photo, mapping the battle route and many more.

New services for the project

Two teams with ITMO University students were named among the winners of the contest. The RHT.ai team came first in the data collection track with their service “Create your own memory postcard”. Grigoriy Frantsuzov, an ITMO University graduate and the captain of the team, explained that the service allows a user to upload a picture of the veteran and get an interactive card with the battle route and information about the veteran’s distinctions. Moreover, the program can find and tag the veteran on group pictures, even those previously unknown (for instance, those found in National Archives). In the future, the service will be integrated with VK, so that the children and grandchildren of the veteran could contact the relatives of his fellow soldiers.

“Our team decided to take part in the hackathon because we found the topic interesting and important. Moreover, this track is close to what we do, as we work a lot with processing pictures and collecting big datasets. I have only positive things to say about MemoryHack, we were constantly in touch with the team and the organizers via Zoom and Skype. There were no connection problems. We are adding the finishing touches to our service now and are planning to launch it in two weeks,” says Grigoriy Frantsuzov.

The IBI solutions team came third in the same track. Ivan Fyodorov, a PhD student at ITMO’s Faculty of Secure Information Technologies and the captain of the team, reckons that their automated filter for picture moderation based on a neural network was what helped the team win.

“Our service automatically downloads open source pictures of WWII veterans and moderates them. We talked to the experts and found out that right now the system moderators have a huge load (up to 100,000 photos daily), so the process had to be automated,” expounds Ivan Fyodorov.

During the hackathon, IBI solutions was able to develop an MVP, and now the project has entered its testing stage.

“Online hackathons are the best way to have a great time and make something good while you’re in quarantine. We always try to take part in such online events because thus we can ensure that every member of our team is in their ideal working conditions. Usually, we get together at someone’s house or office, discuss the idea, assign the tasks and then work remotely. This arrangement allows us to get the necessary feedback from the experts while also getting rid of all the pointless bustle that’s always present at offline hackathons,” adds Ivan Fyodorov.

BUGuwix came first in this track. The team created Spotter, a service for picture editing and medal recognition.

Also in this track were the following: a service for photo animation and colorization; a chat-bot that provides a complete report on the veteran’s heroic deeds with a battle route map and the number of battles fought; and a VK app that connects the people whose relatives knew each other during the war. To work with the app, the users need to upload a picture and the necessary information about the veteran, and the app will use the Memory Road database to identify his fellow soldiers, suggesting the user to become friends with their relatives.

The Memory Road project is created to preserve the memory of the WWII participants. It’s a database with information about every veteran of the war. Apart from photos, each user can share details about their family history and their ancestor’s heroic deeds. Anyone can take part in the project that is available here.