Dmitry Kukin, a Master’s student from ITMO’s program in Multimedia Technologies, Design and Usability, works at INTV, a company specializing in developing software and TV equipment for recording and broadcasting of sports events, as well as the graphics side of livestreams and stadium screens. As an employee of the company, Dmitry has been working on a project called Meteora-Referee, which will function as a video goal system. ITMO.NEWS asked Dmitry about the project and the current stage of its development. 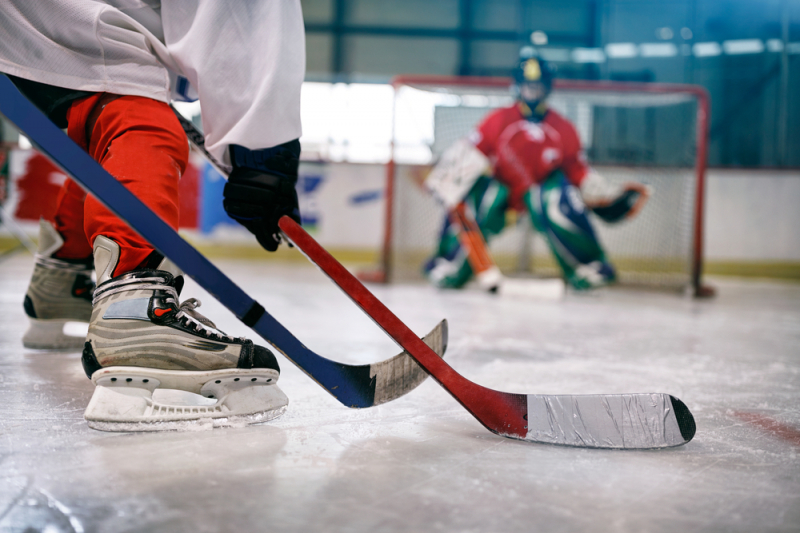 The video goal system is meant to lower the risk of mistakes of referees at hockey matches. It’s something of a safety net for the main referee who, naturally, cannot keep track of everything happening on the rink, and thus cannot be absolutely sure that no rules were violated as another goal got scored.

That’s where the video goal comes in to keep track of the puck and settle disputes. It is essentially a system of cameras (three in each position – over the goal, behind it, and inside it for each team, as well as a panoramic one for the whole field), and a video server for multichannel recording and playback. The system entered testing at Kontinental Hockey League (KHL) in 2009 causing a special position to appear – a video goal judge, who sits in a special room above the rink and has not only an overview of the whole field, but also access to the video recordings. The latter allow the judge to analyze each moment in detail and assist the main referee in settling a controversial moment. To better navigate the video goal system, there exists a special operator who rewinds the recording, chooses the most informative angle and expands the image if needed.

According to Dmitry Kukin, an engineer at INTV and the developer of the system, they received an order from a major multifunctional ice arena that hosts KHL games. Initially, it was planned to install another INTV product there, Atlas-Fractal, a system that provides interactive infographics. There was also an order for a video goal system, which is one of the KHL requirements. INTV had Meteora-Sport, a project with a similar functionality – a system of slow video playbacks, but there was no referee assistance system that would fit the KHL requirements. The project took half a year to complete.

“We had to study a lot of documents in the course of the development process – first of all, the rules and regulations, to create a system that will meet every requirement, as well as a lot of literature on recording in various formats, data storage and compression. That’s where my Bachelor’s in audiovisual equipment from the Bonch-Bruevich St. Petersburg State University of Telecommunications came in handy. As research was involved, I quickly decided to use this project in my Master’s thesis, and Vitaly Putilin, the head of the company and the project, agreed to act as a consultant and a reviewer. He happened to be connected to ITMO, too, having graduated from a PhD program here. So I was even more interested in the project,” says Dmitry Kukin.

The system was installed over the summer of 2019, and operated at several games in August that year, with updates and improvements added to it in February 2020. There was another update planned for April 2020, but it had to be postponed because of the pandemic.

A team of developers is currently working to improve the functionality and usability of Meteora-Referee – a new timeline was introduced that allows quick transitions along the recorded material to jump right to the specific episode. The interface also now boasts separate windows with data from the referee system, which will speed up the decision about whether or not the puck entered the goal before the period ended.

Dmitry also notes that work was done to improve the image quality with special smoothing and moving object processing algorithms so that the puck is clearly seen on screen even if its speed is over 55m/s. One of the advantages of the system is the function of simultaneous rewinding of all recordings in the interface so that the operator can quickly choose the most informative angle for each moment.

INTV developers underline the fact that convenience of referees, especially in stressful conditions, is of utmost importance to them. That’s why they don’t only rely on their own experience but are also open to suggestions and feedback from users of their system on how better to update it. According to Dmitry, the main requirements are for the software to be user-friendly and have the minimum number of lags and bugs. In the future, it’s planned to increase the number of cameras to meet the new KHL requirements.

“We’ve only completed the first stage, and now we need to further develop the system. In the current version, every signal is recorded on a single local server. And there are only eight signals available. We already have a release for the second stage, in which there will be 16 cameras to provide a greater number of angles. In the third stage, there will have to be 24 incoming video signals – that’s what the ice arena ordered,” explains Dmitry Kukin. “We’ve designed a cluster structure for the third stage that includes three recorder servers with eight channels of recordings and one working space, a player for all of those signals. A specialty of the video goal system is that all signals need to play simultaneously so that the operator can switch between them. For instance, we need to figure out how to transmit signals in a cluster system without any lags or quality loss.”

Dmitry also holds that the system could be adapted to other sports, like football, in the future. Right now, the system meets the KHL regulations and is fitted to hockey. To adapt it to football, it would have to be seriously changed with the addition of tracking and 3D modeling of the ball, the offside line and the goal.

Apart from international video assistant referee producers such as the American Slomo-TV, there’s also the Russian Forward-Referee by SoftLab-NSK based in Novosibirsk. Dmitry believes the new INTV project will find success on the Russian market.

“Our software is in demand with several potential clients negotiating with the company at the moment. We have a lot of ideas on new functionality of Meteora-Referee, and even more – on how to adapt it to other sports,” says Dmitry. “We are now looking to employ more programmers in our team, so we would like to collaborate with ITMO graduates, especially those with a background in TV and video signals processing. If anyone interested in such a position is reading this, they can contact us by email posted on our website. We can offer interesting projects in the field of software development with an opportunity to test them in practice – over TV-shoots of various programs, from sports games to entertainment shows.”