The system designed by Orbi Prime includes a mobile and web application, as well as a special phone stand for handwritten data input. 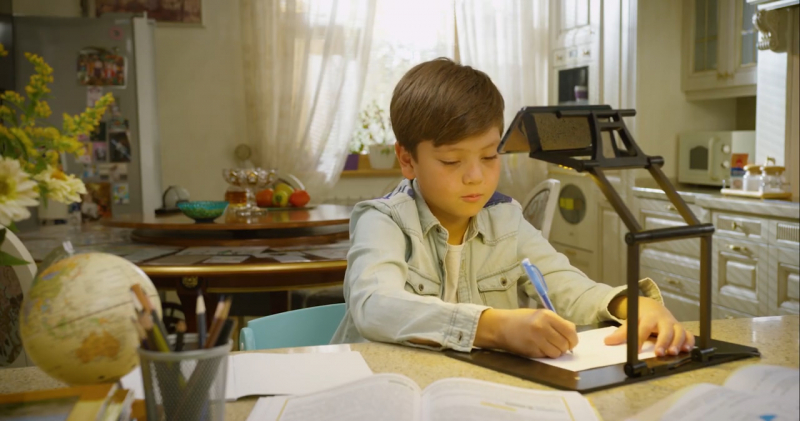 A screenshot from the video demo of Orbi Prime’s product. Credit: youtube.com

The phone is placed on the stand so that a user could see the screen. At the same time, its rear camera faces a piece of paper that lies on the stand’s surface and is illuminated by a backlight built into the phone stand. Everything written on this piece of paper automatically appears on the online board that all users can see and interact with.

The developers wanted their product to be affordable for most people and that’s why the stand will cost around 1,000 rubles. Initially, it was intended only for online tutors, but the pandemic and school closures have shown that this system can be widely used at schools and universities and solve some of the challenges of online education.

“Clearly, the pandemic has stirred up the demand for various distance learning systems. And we understand that there is a problem with technical equipment as not everyone has good laptops, let alone tablets. It’s not possible to study physics, geometry, or mathematics without handwritten inputs because you need to write formulas, make drawings, graphs, and so on. We were thinking about a potential solution and realized that everyone has a smartphone. Plus, they all have high-quality cameras and it is enough to photograph a sheet of paper,” says Alexander Moreno, CTO of Orbi Prime.

The system is intended not only for classes but also for creative workshops, conferences, and video calls. The stand is great for highlighting your face or scanning, for example, when you have to hurry and send some documents or put your signature. Plus the app itself helps to organize classes more efficiently.

“After doing a bunch of interviews with tutors, it became obvious that they are sorely lacking a user-friendly platform for online classes. Of course, there are online boards but so far they are not a complex, integrated solution, and tutors still have to simultaneously use several services such as Skype or Zoom, online boards, presentations, and so on. We offer them to use only one app for all their interactions. Our system is based on P2P networking and it makes it possible to do without a central server with its bulk traffic. This means, firstly, reducing the cost of calls, and secondly, easier integration of this solution into other existing remote learning systems and platforms,” explains Alexander Moreno.

The Orbi Prime company is known for its eyewear for recording and streaming panoramic videos. When asked why the team decided to switch to another project, Alexander noted that their startup is always open to new ideas, and its strong and close-knit team of engineers implements complex tech solutions as fast as possible.

The team managed to develop a prototype within just a few months and quickly started piloting the product. It is worth noting that both the assembly and the production of components will take place in St. Petersburg, Russia. It will let them cut the production costs and avoid the threat of supply interruption due to closed borders.

Currently, the system is being tested at one of the schools in Kazakhstan. The first small-scale batch for testing was manually assembled by the team. Mass production is planned to be launched in February 2021. The first ten thousand devices will be also sent to schools in Kazakhstan, as well as to Nazarbayev University. As for Russia, the product will be promoted here later, after the piloting is over.

“It was important to complete the product and successfully test it by the beginning of this academic year. That’s why we had no time for sales. Now, we are revisioning its functionality, fixing bugs, and preparing for mass production. When we release a large batch, we want to offer it to schools and universities in Russia. We also consider collaboration with online learning and tutoring platforms and integration of our solution into already existing systems,” shares his plans Alexander Moreno.