A large-scale machine learning hackathon with a total prize fund of 425,000 rubles took place at ITMO University in March, with more than 100 people taking part. Among the sponsors were the AMZScout company and the Botan Investments foundation. Read on to find out more information about the hackathon’s tasks, winners, and rewards in this article by ITMO.NEWS. 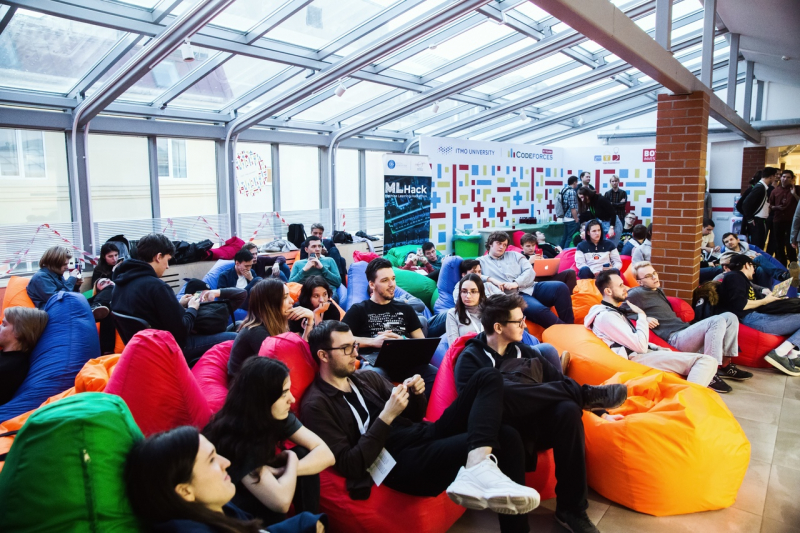 ML Hackathon: how it went

Among 28 teams that competed at the Machine Learning Hackathon were participants from St. Petersburg, Moscow, Tomsk, Yekaterinburg, Ryazan, and Yerevan. Most of them are Bachelor’s, Master’s, or PhD students, but there were exceptions: one of the “Ping_win” team members, for example, is a 14-year old school student. This team is one of the winning ones, by the way.

“The hackathon went great! I think it was important that it took place in familiar surroundings, and the organizers were great. They prepared interesting tasks for participants, and great awards for solving them. I’m very happy that with the help of ITMO University and ITMO University’s Technopark we can arrange such events, and offer an opportunity for the gifted students to present themselves and start their own business,” says Kirill Plugin, the head of Digital Generation student club and one of the hackathon’s organizers.

Even though there was only one track at the hackathon (machine learning), the participants had seven tasks to choose from. For example, “Sales Forecast” is a task by the AMZScout company. The students had to forecast the amount of a product’s sales in the next six months by using the historical data.

The other six tasks were proposed by the Botan Investments foundation. The “Voice Processing” task is about improving the accent, making the voice more confident, and changing it to the voice of another person or a celebrity, while the “Sing like a Pro” task is about professional voice processing in music. For the “Non-Copyrighted Images” task, the participants had to come up with a way of creating pictures on a certain topic. The “Media Compression” task is about traffic optimization of video content. The “TikTok for…” task is about applying TikTok’s content distribution algorithms in other fields. Finally, the “Calories Calculator” task is about counting the amount of calories in food based on its picture.

The participants had 48 hours and five trackers who were consulting the teams during the work on their projects.

“I was talking to the teams every day while they were working on the tasks, consulted them and then evaluated the results of the teams that chose the “Voice” track. I’d like to note that half of the projects were really great. The participants researched the product, came up with ideas on how to put it on the market, foresaw what obstacles may appear and how to avoid them. However, some teams were, of course, weaker. Interestingly enough, not all teams made it to the finals. Around 30% of them were left out. It’s an interesting case, just like in a startup: some members here couldn’t make it and left in these two or three days. Same thing happens with startup teams in three months. It’s a good thing that only the most motivated participants have reached the acceleration,” says Gleb Lopin, the hackathon’s tracker and a mentor at ITMO University’s Accelerator.

The winners and their rewards

The best solution for the AMZScout’s “Sales Forecast” task was proposed by the “Ping_win” team. Its members were awarded 75,000 rubles. Moreover, they were invited to the company in order to discuss potential cooperation and the implementation of their technology.

“We were supposed to teach the system to forecast the amount of sales for each unit of the product based on the historical data, and we managed to do that. We made a forecast taking into account the correlation with the macro indicators, exchange rates, financial quotation, oil and gold prices. I think we won because our data was the most precise, and the mechanism was able to produce forecasts of high quality,” says Evgenii Milenin from the “Ping_win” team.

As for the Botan Investments foundation nominations, the winners are the following: for the “Voice Processing” task – the “Skovoroda” team, for the “Sing like a Pro” task – the “DeepKotix” team, for the “Media Compression” – the “Barboss Low Loss” team, for the “Non-Copyrighted Images” – the “Four Nearest Neighbors” team, and for the “Calories Calculator” – the “PANDAS” team.

All of them have won 50,000 rubles, as well as an opportunity to become the main winner and get extra 50,000 rubles, but, most importantly, to participate in the contest for financial support of investors from Los Angeles that will give out $50,000 for the development of a business.

The main winner is the “Four Nearest Neighbors” team that has developed an algorithm for creating non-copyrighted images on a certain topic.

“There were three of us in the team: Aleksandr Komshanov, Dmitrii Cherniavskii, and Evelina Gudauskaite, third-year students at ITMO University. Our solution is a web service that allows one to generate pictures based on their description. It’s supposed to decrease the amount of time that designers spend on searching for suitable pictures. A user makes a request, it’s sent to the server, coded, and transmitted to a neural network, which generates a suitable picture that the user then receives. We have created the MVP, and now we are going to improve the quality of our image-generator model, and we’ll add functionality for the user to make more specific requests,” says Evelina Gudauskaite, a member of the “Four Nearest Neighbors” team.

Two other teams will get $50,000 each for the four-months long acceleration. The American investors will choose them by the end of March. ITMO University’s Technopark representatives have also noted that they will offer acceleration to certain teams that came up with interesting solutions.