Creating a Dream Game: Advice from a Game Designer with 17-Year Industry Record

Living in the office, relaxing at parties, and devoting six years to the creation of a dream game: this is how game designer Kirill Zolovkin describes his life. In his 17 years in the industry, he has worked his way to the top at the company OctoBox Interactive and won a multitude of awards. There have been other recognitions; for example, one of his games was streamed by PewDiePie, the gaming YouTuber extraordinaire. In his talk at an open day of the educational program “Game Development Technologies”, Kirill shared about stumbling blocks in video game development. 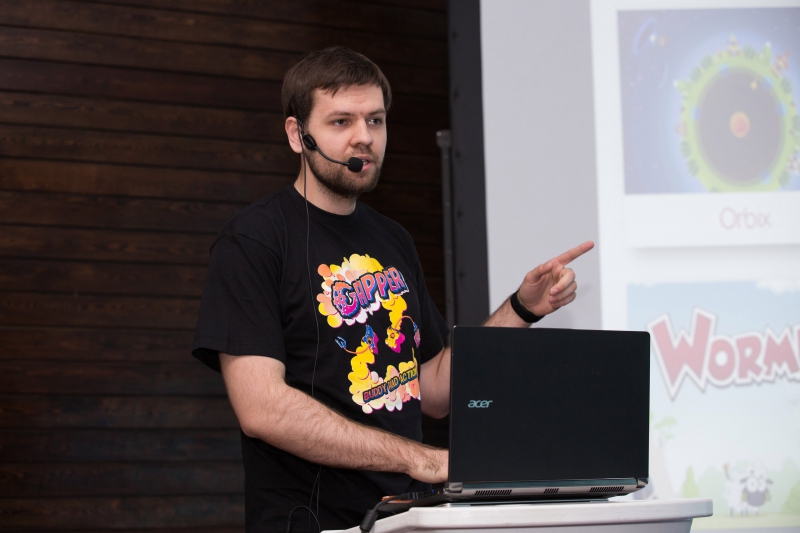 The first rule of game dev is that dreams come at a price. Most often, this is the time you’ll have to spend etching out your creation. My first real game took me six years to complete. My second programmer left me along the way, and my publisher changed their mind about cooperating on the project, but despite all these setbacks, six years after commencing the work I launched my own version of Tetris.

From the game design point of view, Tetris has nothing short of a cult status, but what if we got a little experimental and started moving the blocks and rotating the field? And arranging the figures as per the designated places? And make all this work on mobile platforms? That’s how the idea of Steam Panic was born.

After its release, the game won a lot of awards, unlike many of the projects I developed for other companies. My first years in game dev were spend in studios, where I got to work on various puzzles, shooters and racing games. The creative process there was more akin to filling out tables in Excel: you get a task from the bosses, insert all the formulas and go home. With Steam Panic, I worked alone and in my free time. In the end, the game went down a treat, both among critics and gamers.

Unfortunately though, the game didn’t bring me any money. This is another rule of working on a dream project: the best case is when it ends up paying for itself, but this is hardly likely after six years of work.

Because my old dream fell flat, I came up with a new one: to make a popular game that would pay me well. And that would actually be fun to make. That’s how Paper Knight came to be. The main protagonist there is Mr. Vedr Vedrosov, who, after his ice bucket challenge attempt goes awry, is forced to constantly don a bucket on his head. The gameplay is that you have to press the right buttons at the right time to fight the enemies away.

This pure fun ambience is also channeled by the game’s soundtrack, which includes the famous Eye of The Tiger. Sadly, after as little as ten seconds of its use, the copyright holder company billed me 2,000 euro, so I had to mix up the notes.

Unlike my previous solo project, here I worked in a team of 25 people. Together, we took part in a game dev jam and in as little as two weeks, created our first prototype. We were lucky enough to have PewDiePie, the most famous streamer with the second biggest subscriber tally on YouTube, play it. “Very impressive and cool game,” was his verdict on Paper Knight.

What happens to a game after PewDiePie bestows it his attention? All the other bloggers start making videos about it. So, the demo version that we cooked up in half a month became so popular that it earned us 1,500 dollars of ad money in a couple of weeks. Everyone said that we wouldn’t make it, but we did, and big time. At that moment, it seemed like my dream finally came true.

After this success, I fully experienced the joy of work parties. In our line of trade, you don’t just party, you party hard. The industry offers loads of amazing opportunities for visiting the world’s largest cities and, well, having some fun there. DevGAMM, White Nights, Casual Connect, Indie Space: these are the conferences after your own heart if you want to bring it on.

The results of Paper Knight and the expectations problem

Firstly, the dream game 2.0 ended up being stuck on the shelf for the whole half a year, just because the investors couldn’t divide it between them. Secondly, it didn’t come out exactly as I wanted it to. This happens very often. In general, dreams have this strange aspect about them: they sound great but turn out to be a total failure in practice, just like No Man’s Sky. Dreams are something abstract and inspiring. Hearing your ideas, people around also start to dream like crazy.

It’s even worse with the big fish like bosses and investors: they dream up an ideal way of how something you pitch them should look like, and then you can’t meet their far-flung expectations. Then again, conflicts can also arise within your team. The dreams of different participants of the game dev process often collide, and if these people have influence like, say, your art-directors do, they start to pressurize you into their way of thinking.

On believing in oneself and phrases to appease parents

When I was choosing the university to go into, my parents tried to persuade me to apply for an economics faculty. Their rationale was that it would be better for me as my sister worked there, and I wasn’t that great in self-discipline in the first place. In the end, I agreed, and spend six years doing economics, which altogether wasn’t a bad experience. But I left the economics part for the classroom and spent all of my free time on developing video games. Thankfully for my fellow game dev enthusiasts out there, it is now a degree by its own.

If you’ve decided to study game dev but in that are at odds with your parents, there is one phrase you can use to win them over. Video games are the fastest growing entertainment industry out there. Its profits outweigh those of the film industry and are increasing with each year that passes. The studio Epic Games earns millions on Fornite and is very generous on grants for game devs and game-devs-to-be. There’s still that chance that your relatives won’t understand, but whatever.

Dreams in a nutshell