The team of ITMO’s Youth Robotics Lab became first in the RCJ OnStage category among school students aged 14-19 at the national round of RoboCup 2022. At the contest, the team Simple Dimple presented their musical robots who performed Caprice No. 24 by Niccolò Paganini and Kalinka Malinka by Ivan Larionov. The show featured a robot (playing the balalaika), one of the team members (playing the dombra), and robot matryoshkas as their backup dancers. 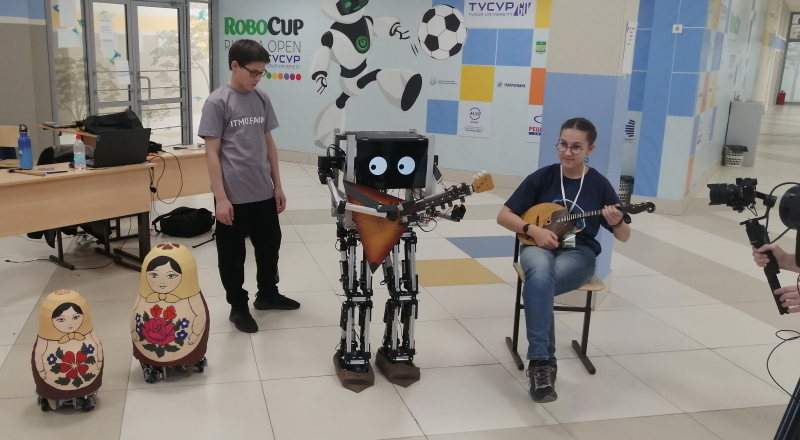 At RoboCup Russia Open 2022, participants could run their performances twice. As noted by Igor Lositsky, the team’s coach and the head of the lab, most players use this opportunity to get the maximum score since they can repeat their performance once again and receive points for the best one. Simple Dimple, however, decided differently: they ran two different shows instead. First, Daria Yablunina and a robot named Iron Henry performed Kalinka Malinka by Ivan Larionov and then Niccolò Paganini’s Caprice No. 24 with robot matryoshkas dancing in the back during both performances.

“When people watched our performance, they couldn’t believe it was live but it was. Iron Henry was playing and Daria accompanied him. When she, for instance, was doing the instrumental part of the tune and the robot had to join in, she passed her hand over his sensor so that he could start playing and they performed together,” says Igor Lositsky.

While stage performances constituted 40% of the final score, participants could receive 30% of their points via presentations where they talked about their robots’ features and interviews where they spoke about the technical part of their projects. As a result, Simple Dimple was named best at the RCJ OnStage robot show. However, Igor Lositsky believes that it is way more important to create a project that people will love rather than to get the highest score.

“We try not to create robots that will simply bring us a technical win. Instead, we strive to develop projects that will have a potential and will appeal to many. Our goal is to come up with a show that people would want to watch over and over again,” notes Igor Lositsky.

In the future, the team is going to improve their robots, create novel musical shows, and assemble the third robot matryoshka. Moreover, they will launch Cybertheater that will bring together all the lab’s robots, including robot matryoshkas, Iron Henry, Robert Robotecky, Elza, and Seldon. By the way, when creating Iron Henry, the team took inspiration from Kazimir Malevich's Black Square and works of other Russian suprematists.

The university's team at RoboCup 2022