It’s a wrap for this year’s World Robot Olympiad (WRO-2018), an international competition for talented school and university students from more than 60 countries, and a good one at that for ITMO University’s robotics team, who took first prize in the Senior High age group. The team was led by coach Igor Lositskiy. In total, Russian teams have claimed three medals in all age groups of the Open category. 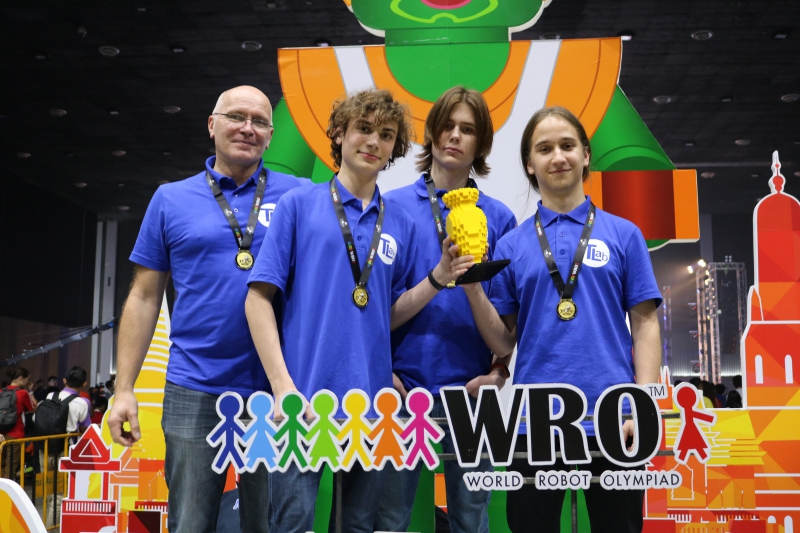 ITMO University’s school team from the Creative Robotics Laboratory of the School of Computer Technologies and Control have emerged victorious in the Senior High category, leaving the team from Germany at the second place and the US at the third. The winning team consists of three participants, school students Vasily Dunaev and Dmitry Kharlapenko from the Presidential Physics and Mathematics Lyceum №239 and Alexander Tyulpanov from the Laboratory of Continuous Mathematical Education. They are coached by ITMO’s Igor Lositskiy and Evgeny Zavarin. The Creative Robotics Laboratory project is co-organized by ITMO with the Presidential Physics and Mathematics Lyceum №239.

ITMO team competed with a project Strawberry Fields. This is a smart fruit patch like no other, being handled by a robot which uses a camera and a neural network to locate the berries, identify how ripe they are, and uploads the map of the patch to the Internet. Connecting through a special app, fruit lovers then choose any berry they would like to feast on, after which the robot readily picks it and dispatches it on a quadcopter which delivers the berry to the consumer.

According to Igor Lositsky, what makes the project stand out is its use of the cutting-edge, Soft Robotics technologies, such as a soft capture mechanism and a system capable of independently growing all kinds of plants with the help of neural networks and real-time databases. It was ITMO’s Biochemistry Cluster specialists that helped the team members master the complexities of the soft capture mechanism. They also provided the team with all the materials necessary to create the Soft Robotics elements, which enable the green-thumb robot to work with fragile things such as strawberries.

Earlier on, the project was declared best in the Senior High Open category at the Russian Robot Olympiad, a win that gave the team the ticket to the World Olympiad in Thailand.

“The team improved on the device after the national competition, developing a more sophisticated capture that is much more fault-proof than the previous version. They also adjusted the neural network, which enabled it to analyze berries in fuller detail, increased the productive area of the patch twofold, and added the option of delivering the fruit via the quadcopter,” shares Igor Lositskiy. “Competing at this year’s World Robot Olympiad has proven especially difficult as there were 40 teams from all over the world vying for the main prize, compared to the usual 30 or less. There were lots of strong projects too, so our team had to give their 120% to win. But we did it!”

The WRO-2018’s pool of participants included 486 teams from 60 countries, contending in the Regular, Open, and Student categories, as well as in the WRO Football match. The competition was held on 16-18 November in Thailand. Russia was represented by 19 teams from Vladivostok, Naberezhnye Chelny, Moscow, Novosibirsk, Kazan, Khimki, Yekaterinburg, Novorossiysk, Innopolis, Tyumen, Nizhny Tagil, Astrakhan and St. Petersburg.

Russia’s final medal count consisted of three medals won in all age groups of the Open category. In addition to ITMO team’s victory in the Senior High age group, first place in the Junior High group went to a team from Kazan and their Sustainable Logistics project. Another team from Kazan came in third in the Elementary group, having been recognized for their Vegetarium robot aimed at growing vegetables.

Scoring a notable mention in the Regular category was a composite team from St. Petersburg, Astrakhan, and Novosibirsk. The team, which included ITMO University representative Alexander Khamkhoev, was awarded a special prize in the Future Innovations nomination which paid tribute to the elegant simplicity of the robot they created.

The full WRO-2018 winners list can be found here.

The 2018 victory continued the winning pattern for ITMO University’s robotics team, who also came first in the World Robot Olympiad 2017 in Costa Rica. Back then, the team competed with Forester, a walking and riding robot that monitors the state of forests with an impressive capacity of ten forest guards in one.