Today, St. Petersburg celebrates its birthday. 317 years ago, a city was founded in the north of Russia that would go on to become a global center of cultural and technological development. Today, in the south of the city, the Yuzhny satellite city is home to a new project that is expected to become a most powerful growth driver for the city and the nation. ITMO Highpark is a world-class research, education, and innovation center and the site of ITMO University’s second campus, as well as research centers, student dorms, and, in the longer term, a techno-valley and business park. In this article, we’ll look at the project’s history, stages of development, and timeline – its past, present and future – as well as which challenges this new innovation cluster will tackle. 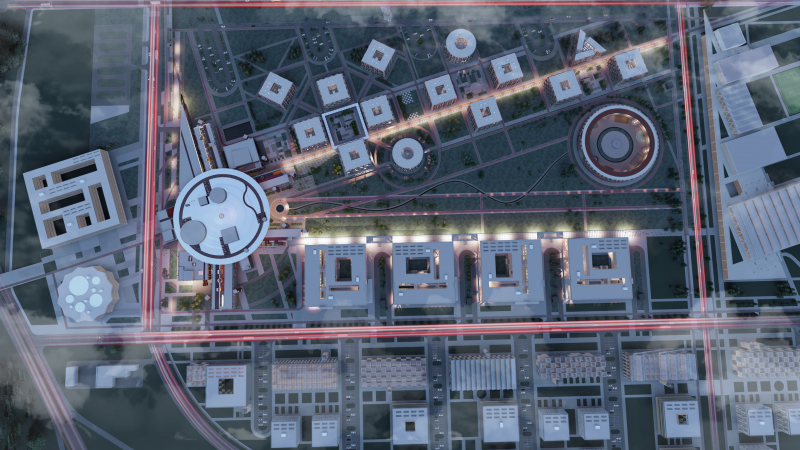 The idea of establishing a world-class sophisticated research, education, and innovation center under the aegis of ITMO University first emerged in late 2012 – early 2013. Its cause was the lack of infrastructure needed to implement the university’s new development strategy. It was then that ITMO adopted a Master’s-PhD university model and focused on world-class R&D.

In order to achieve those goals, it was important for the university to establish close collaboration with businesses, state corporations, and international partners, to create an entrepreneurial environment, and to increase by several times the number of new and successful companies (startups) that employed or were founded by its students.

Bringing together the resources of the university and various businesses would facilitate the involvement of students in the day-to-day working processes of those companies, while joint research projects with major partners would help build a foundation for the development of science in fields that are new for the university.

Abandoning the classic approach to research and education became a major challenge for the university. A lack of competencies needed to tackle a project of such scale – in terms of both content and infrastructure – led ITMO to begin an intensive search for partners and allies who would be ready to collaborate on a plan for how to implement such an ambitious endeavor.

In 2014, the company START Development joined the project as a key partner. The company is the owner of a land lot over 2,000 ha in size in the Pushkinsky District of St. Petersburg, as well as the driving force behind the construction of Yuzhny satellite city. As per the plans, Yuzhny will be home to 134,000 people on a territory of more than 4.3 million square meters. For the university, becoming partners with the developer and receiving an 87 ha land lot was a massive leap forward. The university’s innovation cluster is expected to become the city’s ideological “heart” due to its unique nature and investment potential.

It took some three years to draw up the complex project in collaboration with the Government of St. Petersburg (under the Governor Georgy Poltavchenko) and the Russian Ministry of Digital Development, Communications and Mass Media (under the Minister Nikolay Nikiforov). In the fall of 2017, the university received federal support when the Prime Minister Dmitry Medvedev publicly announced the creation of a new innovation cluster in St. Petersburg with an investment volume of 41 billion rubles. Of that amount, 53% would come from the federal budget, 12% from the budget of the Government of St. Petersburg, and 35% from private investments.

“I have recently signed an order for the establishment of a new innovation cluster in the Pushkinsky District of St. Petersburg. It will contain research centers, laboratories, academic buildings, dormitories, innovative production facilities, and a campus for ITMO University,” he said.

The Russian Government Executive Order 2237-r, signed on October 13, 2017, also stated that for the purpose of carrying out the complex project, a stock company ITMO Highpark would be established, with 100% of its shares owned by the government.

Thus, by the end of 2017 ITMO University had decided on a joint name for the innovative cluster – ITMO Highpark – and gained support for the initiative at every level of government, 87 ha of land, and funding for the project via a specially-established eponymous stock company, the board of directors of which includes representatives of the Russian Government, the Government of St. Petersburg, ITMO University, and businesses.

At the core of ITMO Highpark is the combination and fusion of education, science, and business. Its mission and vision are focused on unlocking human potential and establishing an ecosystem conducive to the growth of talent, quality of life, and capital. ITMO Highpark is presented as an environment for the personal, professional, and creative development of its staff and students. The project will employ some of the top scientists, educators, and specialists from around the world.

Its scientific and educational area of focus is applied research and development in the following fields:

The R&D centers of ITMO Highpark’s resident companies and ITMO University’s laboratories will develop new technologies and solutions. In this manner, the cluster will become a testing ground and point of origin for new knowledge and its commercialization.

The work of ITMO Highpark and its residents will aim to develop markets such as: urban studies, safe/smart cities, the exploration of new territories, extreme environments, and virtual worlds, and creative industries.

As per its design, ITMO Highpark will consist of three segments:

In order to develop the project’s architectural plan, the ITMO Highpark company launched a design competition in the fall of 2018. The cost of the architectural plan was estimated at 59 million rubles. The Moscow-based architectural bureau RTDA, which already has a great deal of experience in developing large-scale projects around the world, was named the winner.

In December 2018, the international expert board chose the concept proposed by Allies and Morrison to serve as the basis of Highpark’s architectural plan. At its foundation is a clear separation of the territory into academic, research, residential, and production areas, as well as a transport network built around bike lanes and pedestrian paths.

Upon the competition’s completion, RTDA developed a master plan and proposed a general architectural appearance for the buildings and inner spaces. The bureau also looked into the transport and pedestrian logistics and recreational areas, including that of the adjacent territories. In May 2019, the joint team of RTDA and Allies and Morrison won the prestigious A’ Design Award & Competition for their concept of ITMO Highpark. RTDA’s master plan was also included on the shortlist of the 2019 World Architecture Festival Award.

A technical design was then developed based on RTDA’s solution and a next stage of the competition was launched. In July 2019, the architectural firm Studio 44 won the right to develop ITMO University’s second campus. Their task was to develop the structure of the internal and outside public spaces, provide a concept design of the campus, plan its street network, fine-tune the design documentation, and secure its approval with the relevant authorities in order to begin the construction of the second campus, which includes an academic building, two dormitory buildings, and a student club headquarters. The firm’s contract is valued at 196.7 million rubles.

“Above all else, our team was inspired by the ideology and values of ITMO University. That was where we began. We set ourselves a goal to create an open and socially-minded space in each part of the project. Of course, there are plenty of great campuses around the world to take inspiration from, and we’ve studied them extensively, but what makes this particular project unique is that it has no direct counterpart. We were also inspired by Italian sloped squares and wide stairways where people can hang out. Soon, I hope, ITMO will host its events not only in Alexander Park, but at its new campus, too. I can say that the project’s architecture is as modern, dynamic, daring, and assertive as the university itself,” says Anton Yar-Scriabin, the main architect of the campus and a partner at Studio 44.

In March 2020, the first public hearings were held on the conditionally authorized use of a site for construction in St. Petersburg’s Pushkinsky District as part of ITMO Highpark and Yuzhny satellite city. As a result of the hearings, the site was approved to be used for the construction of academic buildings and sports facilities. There were no objections or recommendations by the participants of the ITMO Highpark hearings.

In May of this year, the St. Petersburg City Planning Council approved the plans for construction of the first stage of ITMO Highpark, ITMO University’s second campus.

ITMO University plans to obtain a permit for the construction of facilities on the territory of ITMO Highpark in the fall of 2020, and to begin construction in late 2020/early 2021. According to the plans, the first stage of construction should be completed in 2022 and will include the academic (main) building, the student club, and one dormitory building; in late 2023, the second stage of construction will be completed and will include the Life and Health Sciences Center, IT Center, Photonics and Quantum Technologies Center, a second dormitory building, a sports facility, and a business incubator (as part of the Techno Valley). From 2024 to 2027 the following buildings will be constructed: National Center for Urban Studies, Data Processing Center, business incubator at the Business Park, and social infrastructure of the Yuzhny satellite city.

Today, work on ITMO Highpark is proceeding as planned. However, in the context of the pandemic, the matter of the project’s funding is quite important, in part because some of the funds come from St. Petersburg’s budget.

At the moment, contracts have been signed for the development of a demarcation and land planning scheme, as well as design and estimate documentation for buildings of the first stage of construction (main academic building, student dormitories (first and second buildings), student club, and street network) .

Contractors have already signed on to integrate the area into the power, gas, water, and sanitation networks..

“We understand the complexity of the epidemiological and economic situation and the resulting need for budget restrictions. At the same time, the construction of ITMO Highpark marks the implementation of one of the major infrastructure projects that the President spoke about at a meeting dedicated to supporting the construction industry. Such projects, according to the head of state, should be continued in order to ensure the recovery of the Russian economy after the recession," says Andrey Nazarov, General Director of ITMO Highpark JSC.


"ITMO Highpark is the largest project of its kind in St. Petersburg. The construction of ITMO Highpark will continue according to schedule thanks to consistent funding from the federal government. We have adjusted our financial plans, and as per the latest revision, the city budget funds, which will be allocated in 2021, not 2020 as previously planned, will be used at the end of the first stage of construction to put a final touch on ITMO Highpark facilities and create public spaces," he said.

Today, the plans for ITMO Highpark are also closely linked to the university’s scientific, educational and entrepreneurial development. New and existing laboratories at ITMO University conduct research in the project’s key fields, new educational programs are being launched whose graduates will later become Master's and PhD students at the new campus, and research projects are established on a global and national scale.

For the second year in a row, ITMO University’s accelerator team is looking for and training startups to operate within ITMO Highpark’s focus markets: urban studies, safe/smart cities, the exploration of new territories, extreme environments, and virtual worlds, and creative industries.

“ITMO Highpark has been open for a while already, and it’s working 24/7! For us it’s not about waiting for the buildings to be complete, but about developing our ideology, our research, and education, to work with our partners on new projects right now, so that we can transfer them to the new venue as soon as the construction is complete,” says Vladimir Vasilyev, ITMO University’s Rector.