For a whole month between June 11 and July 11, St. Petersburg had been swept off its feet with the UEFA European Football Championship 2020. The tournament was especially festive this time around, as football aficionados had been waiting for it a year longer (it was scheduled for last year and postponed due to the pandemic). However, it was not only a colorful show for everyone – some, including volunteers from ITMO University, took on themselves the responsible job of organizing the event. In this article, we reach out to our volunteers to ask them all about their impressions from the event and the reasons why they chose to spend one third of their summer holidays working. 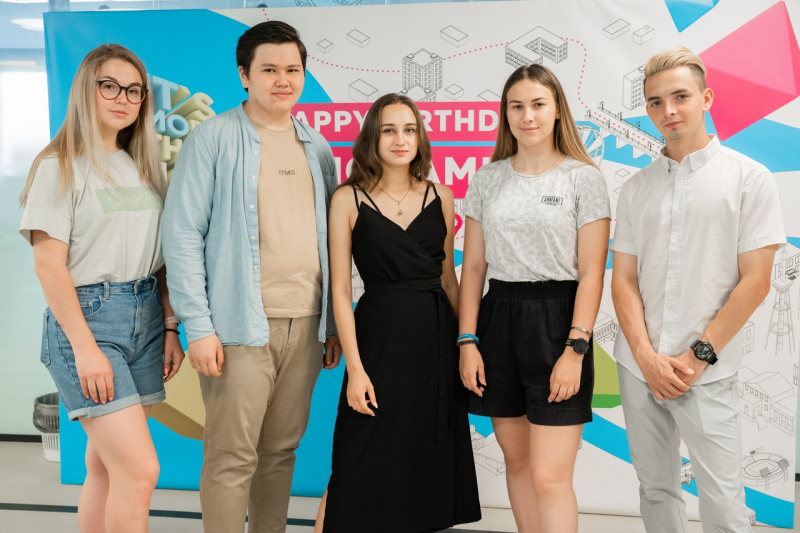 I’ve been a member of ITMO’s People Need You volunteering club since my first year. There, we mostly volunteer at university events, for instance, I’ve recently helped at the graduation ceremony. Last year, I also took part in the #WeAreTogether project that helped elderly people in self-isolation.

I’ve loved volunteering since I was at school – back then I volunteered at Zenit games and other sports events, and I still have many friends from those times. Together, we decided to join the UEFA organizing committee, we were like a great team of old-time experienced volunteers.

UEFA as a whole is responsible for the European Football Championship (Euro), the Champions League, and so on, while the organizing committee works with volunteers – they are responsible for everything happening around the stadium and on it. Other events happening in the city during the tournament are organized by the city committee.

For a long time, I had wanted to take part in a large international event – and I first tried to sign up for the organizing committee back in 2018, when St. Petersburg hosted the FIFA World Cup, but I was under 18, so I couldn’t get in. But I came for an interview in 2019, as Euro was scheduled for 2020 and since then I had confirmed my wish to partake as a volunteer. Funnily enough, I’ve grown 10 cm in height over this time, so I had to change my suit at the last moment.

At the tournament, I was charged with checking body temperature and tickets of organized fan groups and VIPs. This year, I am also working at ITMO’s admissions office, and combining these two positions was a little physically challenging.

Despite everything, however, including restrictions, masks, and scorching temperatures, I really liked it. I especially enjoyed communicating with European fans, for instance, Spaniards were very excited. Once I was also lucky to witness the opening ceremony with national flags, which was beautiful and memorable.

After many attempts of trying to understand what it is I like about volunteering, I realized that I enjoy the whole experience of being at the heart of everything, interacting with many people, and exchanging wonderful emotions with them.

This year, I took an event management class at ITMO, and though I am not sure it is exactly what I want to do, I really love organizing events for the Improvisation comedy club that I lead.

In 2018, I volunteered at the FIFA World Cup as a city volunteer because I was under 18. Then, in 2019 I applied both to be a city volunteer and to work with the UEFA organizing committee, where I was shortlisted first and then accepted as a volunteer of the Information Communication Technologies (ICT) team.

We had a small team headed by contractors from Moscow and UEFA experts from Switzerland, who were responsible for the Wi-Fi connection at the stadium. We were their first line of support, carrying equipment and wires, and testing the connection. We even got to visit the VIP zones and team changing rooms. Our team started working earlier than other volunteers, in mid-May, and we also had shifts on every match day, so that we could help people access the internet all over the stadium, including the field. So I actually had quite a lot of practical training!

I am actually a fan of football and sports in general, so before I came to ITMO I volunteered at other sports events in St. Petersburg. I am also on the university aerobic gymnastics team.

Already at the FIFA World Cup in 2018, I saw how cool it was to volunteer at such a large-scale event. Back then I had learned a lot and especially enjoyed interacting with international visitors. Next year, St. Petersburg will host the UEFA Champions League – and I will definitely be applying to work with ICT.

I moved to St. Petersburg last year, when I originally enrolled into ITMO’s Faculty of Laser Photonics and Optoelectronics and then transferred to another program. From the very start, I started volunteering, even though there were not so many events due to the pandemic. I looked for events organized by St. Pete’s non-profits and that’s how I joined St. Petersburg volunteers, where we mostly did event volunteering and took part in social projects. After I transferred to the new Faculty, I had to take a break from volunteering because there was a lot of catching up to do. So this year the only event I focused on was Euro 2020.

I was team leader of the Last Kilometer department, which is responsible for creating a festive atmosphere on Krestovsky and Petrovsky Islands, Begovaya metro station, and its surroundings. We also helped the fans find their way to the stadium and solve any problems that they encountered.

Before that, I hadn’t had any experience in team management, I’d only worked with quite a number of social projects – maybe that was why the organizers thought me fit to be a team leader. I really liked my position, even though I had to work more than other volunteers – about 12 hours a day. It was exhausting, but charged you up with so many positive emotions! We had a great team and my job was to make sure we had a great time working together.

The next event I am going to volunteer at is the Iron Man race on August 1, where I will also be a team leader. Unfortunately, I don’t have that much time for volunteering, so I choose only large-scale international events – right now it’s more important for me to focus on my studies.

I really like helping people solve their problems, they usually come back to say “thank you.” And that’s incredible, that’s what keeps me going.

I got to volunteer at Euro 2020 thanks to the St. Petersburg volunteer center. I worked at the Last Kilometer and Transport departments: we helped coordinate the fans that were either going to or from the stadium on match days. We showed them the way to shuttles or the metro and also entertained them on their way. Another responsibility for us was meeting international visitors at the airport and railway stations and helping them find their way to hotels or around the city.

I’ve been volunteering ever since I started studying at ITMO, because I’ve always loved helping people and didn’t have many opportunities for it in Kazakhstan. Now I help organize university events and take part in the projects of the St. Petersburg volunteer center, as well as work at ITMO’s admissions office. I would like to do more than just event volunteering, but that will have to wait until the end of the pandemic.

These large-scale events charge me up with positive energy, as I get to help people, be at the heart of things, and try my hand at different jobs. It’s a pity that I didn’t get to communicate with international fans and practice my language – I was placed at the Finland Railway Station, but the railway to Finland is closed now, so I only got to help visitors from the Leningrad oblast.

The last week of Euro 2020 was particularly challenging, because every day I first spent nine hours at ITMO’s admissions office before starting my shift at the tournament. When I came home, I was really tired but so happy! Some might think it's torture, but I really enjoyed it, I liked knowing that I spent every minute of the day doing something good.

Thanks to the St. Petersburg volunteer center, I joined the Euro 2020 team back in 2020 when I went through interviews that, among other things, tested my English and French speaking skills.

I work a lot in design and illustration, and in my application, I specified that I wanted to do something related at the tournament. That’s how I got on the Media team, where my main task was communicating with journalists at the media center. We assisted at press conferences and provided info for publications. It was a wonderful chance to learn a lot about this field. Apart from that, I volunteered at Pulkovo and railway stations.

I came to the St. Petersburg volunteer center in 2019 and since then took part in various sports events and festivals. I really like it because I love meeting a lot of new people and learning something new. It’s a great chance to socialize, and it’s also wonderful to help people with their problems.

I prefer large-scale events because I like being a part of something bigger than myself. Also, I love finding events in my field, so two weeks ago I volunteered at the Design Prosmotr forum, which was really useful. Moreover, I signed up for the Eastern Economic Forum that will take place in Vladivostok in September – I think it’s a great way to travel.