ITMO.FUTURE: How to Help Develop ITMO and Boost Your Skills While at It

ITMO.FUTURE is a project which aims to garner ideas on the university’s development, choose the best initiatives with the help of public voting and expert evaluation, and have these initiatives brought to life by ITMO students. A total of 25 projects have already been selected, with a search currently underway for specialists to implement them. 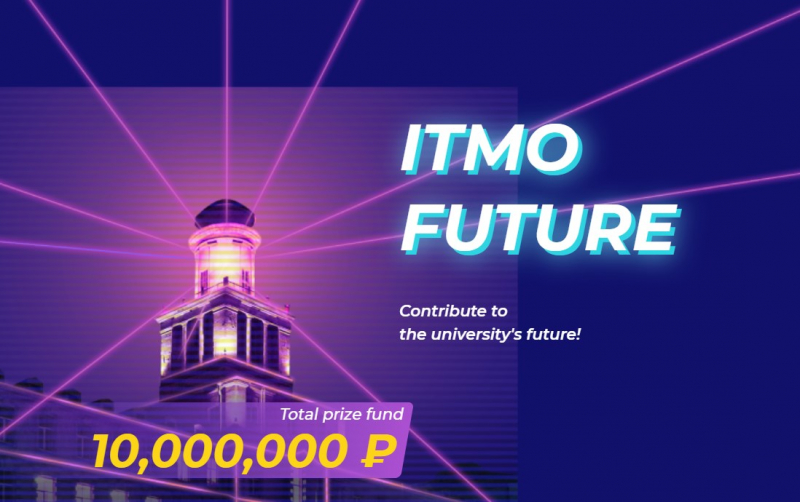 Today, ITMO University finds itself on a new stage of digital transformation which is to affect different aspects of the university’s ecosystem. In this process, it’s important to involve as many members of ITMO.FAMILY – students, staff, and lecturers – as possible. One of the projects that shares this goal is ITMO.FUTURE.

The platform implies garnering suggestions on optimizing the university’s work, establishing convenient communication tools, developing digital services, as well as beautifying the premises and buildings. The received ideas then undergo expert evaluation and are put to public vote in order to identify those of them that are the most topical, well thought through, and ready for implementation.

“Somewhat of an analogue of this system is a popular platform PROFI.ru, where people post various tasks they need to solve, and specialists in relevant fields take these tasks up,” says Evgeny Raskin, head of ITMO’s Department of Youth Policy. “We decided to attempt to implement a similar idea within the university’s framework, putting an emphasis on digital transformation tasks. The second reason for this project is that the university is developing very fast and there are many different tasks and ideas that unfortunately aren’t always brought to life. We thought that such a contest would help solve this problem.”

Apart from the development of ITMO itself, the ITMO.FUTURE project is also aimed at supporting students. They acquire project work experience which they can then add to their portfolio, as well as an opportunity to earn some money. The project’s total budget is 10 million rubles.

“One of the tasks we had before us was supporting the students who found themselves in a difficult financial situation because of the pandemic,” shares Evgeny Raskin. “We gathered ideas from students, graduates and staff, but they can be implemented only by students. And it doesn’t necessarily have to be those who proposed a specific initiative. For example, someone can put forward an idea specifying that they can't execute it because they lack the right skills.”

Some 100 projects were proposed in the project’s first phase – with around 5,800 people casting their votes in ISU. A total of 25 initiatives made it into the finals and are now going to be implemented.

“What we’d expected initially were ideas for digital transformation and optimization of business processes, but the top five initiatives that got the most votes in the end revolved around infrastructure development,” explains Evgeny Raskin. “These are such projects as a hi-tech coworking space DoJob, a service for renting electric scooters, a separate waste collection system, and public spaces in courtyards.”

He also adds that some initiatives shared the same idea, which is why a decision was made to merge them together.

“For example, we’ve got some five initiatives on navigation in the university, and six initiatives on the creation of a platform for aggregating student projects. Of course, we chose the optimal option and proposed the authors of other ones to join its implementation. There are also unendorsed applications that duplicate the projects that are to be, or are already being, implemented. For one, the electric scooters for rent project was greenlit in April-May and starting from this September, will be implemented as a kicksharing service for students and staff across six main university campuses,” adds Evgeny Raskin.

Now, ITMO University students can submit their applications to implement these projects. The candidates have to describe their competencies, confirm their qualifications, and demonstrate a certain amount of experience that would allow them to bring a specific initiative to life. If several equally qualified applications are submitted in this phase, the priority will be given to the idea’s authors.

Among the applicants is ITMO University student Mikhail Rybkin, who proposed three ideas. Two of them were selected and are now awaiting implementation.

“I learned about this program thanks to ITMO.STUDENTS and was really glad that such a contest had finally been organized,” he says. “Long before it came to be, I’d been working on a range of projects in the hope I’d get to execute them sometime in the future, and as soon as I learned about this initiative, I submitted three projects at once – such an opportunity wasn’t one to miss out on. Unfortunately, one of these projects didn’t pass the selection, but two others are now waiting for applications from those who’d be willing to implement them.”

He adds that the most large-scale one out of everything he put forward is the idea of creating a system for communication between lecturers and students.

“I started designing such a system based on problems encountered, from what I heard, by many of my classmates. In a nutshell, the idea behind it is to create a platform housing all communications between students and lecturers – assigning tasks, sending solutions, submitting questions, perhaps all of this could even be tied to official evaluation systems (though this aspect hasn’t been explored yet – the implementation tender has to be won first). When designing the system, the main criterion was the convenience of use it offered to lecturers – as it’s up to them to ensure whether the platform would be used or not. And it’s by bringing all lecturers together in one place that’s convenient for everyone that we’re trying to solve students’ problems. We hope that we’ll succeed,” elaborates Mikhail Rybkin.

Despite the fact that the call for applications for the first ITMO.FUTURE contest is still ongoing, the participants and organizers are already talking about the prospects for its continuation. Notably, among the initiatives put up for public vote is ITMO.FUTURE 2.0.

“We think that ITMO.FUTURE will become an ongoing project for garnering and supporting initiatives. Apart from choosing those who’ll enact the initiatives, we’ll also assign each one a mentor – someone from the university staff who will monitor the task’s progression,” explains Evgeny Raskin. “In the future, we envision there to be a regular submission of such ideas by students and members of staff, and we would also like for them to unite in project teams. We plan that the platform created as a result of the ITMO.FUTURE program will offer such an opportunity.”

“At ITMO, we work with students and develop alongside them. What’s more, I think that one defining feature of our university is that it attracts young people who want to develop together with ITMO. This includes students, scientists, and members of administration. The ITMO.FUTURE project is a great opportunity for students to develop together with ITMO not on paper but in real life, and for us in the university’s administration to hear students and understand their wishes better. I’m impressed by the level of applications submitted. We will continue this initiative in the future, making it more open, including for external applications,” comments Daria Kozlova, ITMO University’s first vice rector.