My Impressions After 5 Months in St. Petersburg

With a sense of satisfaction, I feel that I have made the most of every opportunity I had here. ITMO University plays an important role in this statement and also plays the living experience per se. 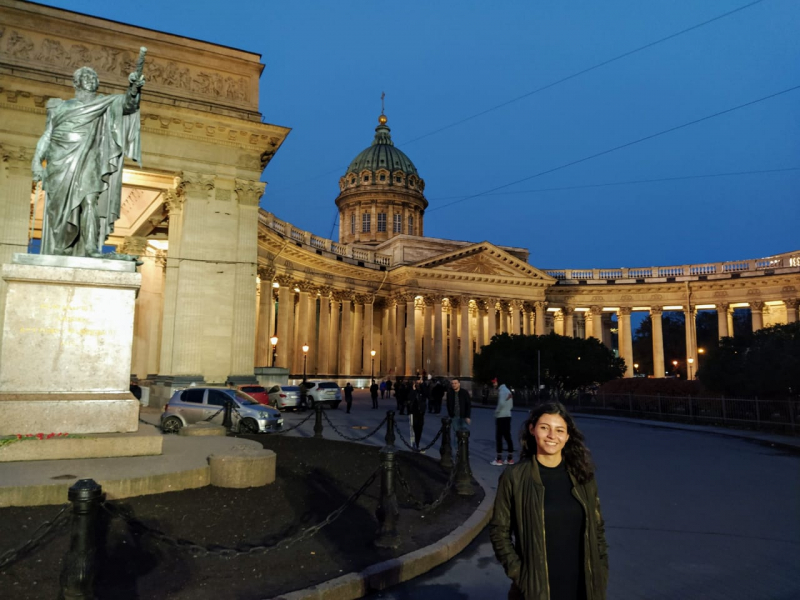 Since my first day in St. Petersburg, it was infeasible to ignore its amazing architecture, the so different clothes worn by the crowd, beautiful nature in parks and numerous and gorgeous bridges spread across the city. I was astonished and could not believe my eyes.

I have never lived in a place where the weather changes so dramatically throughout the year. In São Paulo, the city where I came from, there are slight variations between summer and winter, for instance. Back there, during summer, I used to experience a temperature between 25 and 40ºC and, during winter, temperatures could reach between 10 and 27ºC, but mostly above 20ºC. Hence, it has been quite tough to cope with such low temperatures (below zero). Assuredly, being able to see the snow for the first time in my life was breathtaking.

At least, now I know how it feels and how to live in a place like this. The cold weather changes everything, from what you wear, to what you do for fun and what you eat. I may have not realized this before, but my hometown is in a privileged latitude.

At ITMO University, the semester exchange is planned so that students have classes scheduled as modules or on alternate weeks, contrasting with my home university. This kind of schedule had shown to be much less stressful and more dynamic. Also, I had the opportunity to attend several courses; as a side note, I am an Industrial Engineer and my field is holistic and generic, allowing me to study various subjects. For instance, I really enjoyed pushing myself on coding in the Machine Learning course, even not being a Computer Scientist. Also, I partook many Soft Skills courses. I am sure they made me think about a lot of things regarding myself and how I communicate with others.

However, it should be taken into account that living alone in a foreign country with a foreign language I don’t really excel at had its part in developing my soft skills. I can mentalize many situations in which I had to negotiate or explain myself very well in a language other than native. In addition, many classes at the university were "project-oriented", so I also improved a lot my communication in English thanks to the many presentations I had to perform.

Moreover, due to the addressed dynamic of classes, it was pretty manageable to go out more and get to know the city. I created the habit of walking as much as I could so that I could see the beauty in the city. Something that really helped me in this activity was the fact that, in general, the streets and pavements are really flat, so different than São Paulo city and the town where I study in Brazil.

Even today, although I had loved my experience here, it is hard to imagine me living here for a lifetime on my own. Partly because of my yearning to go back to my country and see my beloved ones, but partly because it also is quite extraneous to the reality I knew. When I wanted to make Brazil’s reality assimilated, most of the time it was easily misunderstood or missed completely. Behaviorists would say — and I agree — that people create their behavior and understanding about the world according to their reality. If someone’s reality is as beautiful as living in a great neighborhood of St. Petersburg or in great places in Europe, you can not expect them to understand Brazilian badges entirely — there is no way, though, to compare such different realities.

Nevertheless, my colleagues' patience and good intentions are something that made me really glad and appreciated. I had great moments with all of them. Especially thanks to Buddy System, students from the exchange semester had been observed closely to all their needs. The System also helped me socialize since they have organized several events and even trips.

All in all, I certainly had had a lot of fun and acquired lots of new knowledge and skills. It has been a unique process of living abroad and alone. I can only express my gratitude for all those people who cared about me because other than these people, I was there completely alone and was fully responsible for myself.