Business Games, or How to Pass Exams Without Taking Exams and Get a Job Without an Interview

Last Saturday, ITMO hosted a business game with second-year Master’s students of the University’s Faculty of Technological Management and Innovations stepping in as participants. The judges’ panel included department heads of Gazprom Neft, a top-three largest oil-producing company in Russia, one of the aims of whom was to select students to be employed at the company. ITMO.NEWS reports on why games such as this need to be included in the education process and whether it is real for a student to become part of Gazprom Neft. 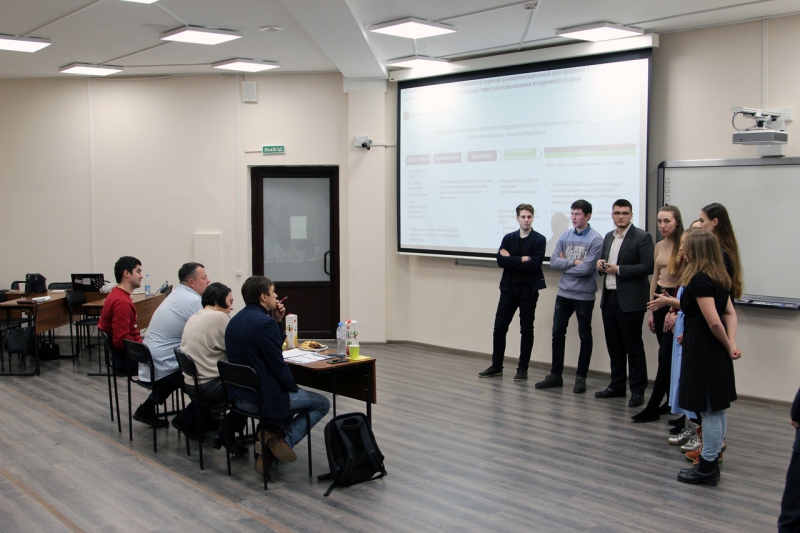 A business game-cum-exam was organized for Master’s students in the framework of two of ITMO University’s educational courses: ‘Strategy and Business Planning’ and ‘Evaluating and Forecasting of Strategic Results’. This original examination format implies putting students in groups to work on problems in assigned conditions (for example, that of conflict or collision of interests) or to identify the potentials of a specific case, which is, fully on in part, based on real-world facts. ITMO’s business game included three teams of students competing for the right to pass a course exam without having to take it, as well as to demonstrate their talents and skills to potential employers.

Participants took on a role of a top management team hired by the Arkhangelsk Pulp & Paper Mill (APPM) to brainstorm new areas for the company to develop in. As per the assigned case’s conditions, the enterprise owners are content with the results APPM has managed to achieve for the past decade, but in light of the increasing consumer expectations to the quality of the services offered, and the modern trend of the universal digitalization, they have been faced with the task of forming a new vision for the company’s development in both national and international markets.

The teams had to develop and defend a concept of APPM’s strategic development for the period of 2020-2030, which was required to reflect new objectives the team would lead the company to. The players were also asked to prepare an overview of key investments and then agree them with the enterprise owners in case the development concept was approved to be implemented.

This isn’t the first time that an examination has been hosted by Diana Sunaeva, a professor at ITMO University and MGIMO and leader of business analysis of corporate functions at Gazprom Neft who deals with big system change management as part of her day-to-day professional activities. According to the expert, the game format adds a much-needed project activity component into educational courses: students are given a task that is closely linked with topics covered as part of the course, which gives them the opportunity to develop a comprehensive vision of the end result and plan for ways to achieve it. Moreover, the game also allows the players to improve their command of soft skills such as leadership, public speaking, the ability to defend their arguments and others. All this helps the participants fulfill their potential and is highly valued by potential employers: several ITMO’s Master’s students have already successfully completed an internship at major companies and are now preparing for entering full-time employment there as a result of the business game that was held by the University in the spring of 2018.

“Contemporary education isn’t all lectures and seminars, it also involves a wide range of opportunities for active networking of students and stakeholders to everyone’s benefit. Information was a more exclusive resource before, as it was teachers who accumulated the knowledge and passed them on to students. Now, when all of the world’s libraries can be accessed via so little as a phone, a modern lecturer’s task is to guide students through the data clusters out there, inspiring them to tackle the problems they face in a comprehensive and informed way. In center-stage of today’s agenda is the problem of self-motivation in education, and self-education in general, and this caused a sea-change in our teaching paradigm. There are no off-the-shelf solutions to address these changes, this is we who create a new reality, partially with the use of new formats,” shared Diana Sunaeva, an associate professor at ITMO’s Faculty of Technological Management and Innovations and the leader of business analysis of corporate functions at the Gazprom Neft company.

Each time, different representatives of large, medium, and small businesses, as well as the educational sector, are invited to take part in the business game as experts. Among this year’s jury members are Anton Treshchalov, Head of the Unified Settlement Center at Gazprom Neft, Ruslan Gulevich, Director General of the Noyabrskneftegazsvyaz company, Samvel Avetisyan, Head of the Yablochkov company, and Anna Arfae, an associate professor at Peter the Great St.Petersburg Polytechnic University.

“This is my first time taking part in such an event. The company I work for pays a lot of attention to communication with students. The major problem we face today is that what most students learn at university is very different from real life. Our task here is to make students more prepared for further work. The strategies that the students have come up with so far are incomplete and have some serious drawbacks, but we can see the potential in them. Today, any student can become part of the Gazprom Neft company, if they have a clear goal. We organize a lot of internships for students and are always open for communication,” commented Head of the Unified Settlement Center at Gazprom Neft Anton Treshchalov.

According to the rules of the game, we had to achieve exponential growth by using the company’s resources. Our team suggested modernizing the production process to make it more eco-friendly. The company has already implemented several environmental initiatives but they are all essentially image-building. We suggested focusing on ecological issues instead, both in Russia and abroad. For example, working with waste paper. Did you know that the recycling of a ton of waste paper saves 30 trees, 2,000 kilowatts of electricity, 20,000 liters of clean water, one and a half barrels of oil, and prevents the pollution of four cubic meters of soil? As of now, 30% of our products are made from waste paper, and this number can be significantly increased. Our task was to garner the data on items that are already being produced from recycled materials, and to propose new ideas. For instance, one of today’s most up-and-coming practices in this field is manufacturing the trays used for serving drinks and popcorn in cinema theaters from recycled waste paper. We understand that paper pulp can be used for making some products, but would still rather advocate for scrap paper to be introduced in the manufacturing process as actively as possible instead. It is, of course, true that both of the materials have their unique advantages and disadvantages, but there is a clear trend of recyclables becoming more and more popular in production.

We also suggested creating a system of partners performing a multitude of different roles; for example, we envisaged a whole chain of partners responsible for collecting and recycling waste paper, conducting logistics and selling end products. Each year, this system can be expanded to include even more partners.