A joint Siemens-ITMO University research lab has been launched in St. Petersburg. Its goal will be to develop unique industry solutions based on systemic AI using the methods of machine learning, big data analysis, and cognitive technologies for applications in economics and the social sector. 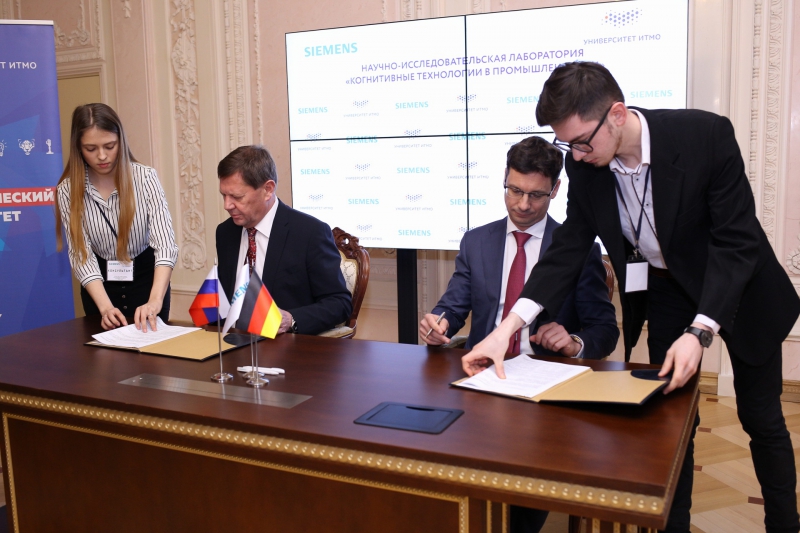 On March 22, 2019, the joint ITMO University-Siemens research lab was officially declared open in St. Petersburg. Vladimir Vasilyev, the Rector of ITMO University, and Alexander Liberov, the president and CEO of Siemens Russia, took part in the opening ceremony. Creation of the “Cognitive Technologies in Industrial Production” laboratory is a part of the Siemens company’s strategy for the development of digital technologies in Russia.

The newly-founded research unit will focus on the development of unique industrial solutions in the field of artificial intelligence with the use of machine learning, big data analysis, and cognitive technologies with applications in production, the power and oil industries, utility services, healthcare, transportation, and urban infrastructure. For example, one of the lab’s current projects will concern the creation of a digital assistant for users of Siemens-made medical devices.

“Siemens” has a great deal of experience in digitalization, and opening a new laboratory together with ITMO University, a leading global research-and-education IT institution, will help us apply that experience to fulfill the needs of Russian industry. This is yet another step in the development of local digital projects, which, as of today, are among the company’s top priorities,” noted Alexander Liberov, the president of Siemens Russia.

At the event, representatives of ITMO University and Siemens signed a strategic partnership agreement that entails the implementation of joint fundamental and applied research and projects in various fields, from intellectual creative technologies and cognitive learning to biometrics and 4P-model healthcare, based on the four Ps: predictive, preventive, personalized, and participatory. Another important goal of this partnership will be to train and support engineers and scientists in the fields of industrial automation, computer science, software development, and the creation of artificial cognitive systems.

“Traditionally, ITMO University has always focused on the application of IT in the generation of interdisciplinary knowledge and its translation into the different areas of industry, business, and the social sector. Together with Siemens, we plan to enter a new stage in the creation of industrial decision support systems that would employ Big Data, AI, supercomputer modeling and VR/AR technologies,” said Alexander Boukhanovsky, the head of ITMO University’s National Center for Cognitive Technologies.

The parties have also signed a memorandum on the inclusion of Siemens among the list of members of the consortium for ITMO’s National Center for Cognitive Technologies, founded in 2018 as part of the National Technological Initiative (NTI) in order to facilitate the development of cutting-edge machine learning and cognitive technologies and ensure Russia’s leading position on the respective global markets.

“We see our induction into the consortium as an innovative and promising step forward in our long-time fruitful partnership with ITMO University. We believe that the results of our joint R&D projects will help us successfully complete the goals of the NTI road map,” said Martin Gitsels, the director of the Corporate Technologies Department at Siemens.

As of now, the consortium is made up of 22 members and includes research centers, major universities and Russia’s leading commercial companies such as Mail.ru Group, MTS, Gazpromneft Science & Technology Centre, and others. ITMO University heads the consortium.

“Company-university partnerships are often sessional in nature: a company makes an order, and then comes back six months later for the results. In cases such as this, it’s hard to predict how well the results would satisfy the client. Our relationship with ITMO University is much more involved and entails regular weekly meetings where we can make sure we’re on the same page. We have an understanding where we’d like to end up, but we’ll decide on tools, ideas, and methods in the course of working together; this should help us remain flexible in attaining our goals. Of course, such a format implies a great degree of involvement on our side, but we’re ready for that,” said Alexander Loginov, the director of research at Siemens Russia.

The company provides significant investments in R&D projects and conducts research in collaboration with Russian universities. A number of leading technical universities and institute, such as ITMO University, the St. Petersburg Polytechnic University, the Tupolev Kazan National Research Technical University, the Moscow Power Engineering Institute, and the Samara University, are host to the company’s joint research labs involved in applied research on a variety of subjects.