On June 24-30, ITMO University’s SCAMT Laboratory held the international summer educational course SCAMT Workshop Week. Participants from Greece, Iran, China and Russia attended lectures and workshops and collaborated on projects in groups. The main goal of the course was to help the young scientists obtain experience of working with modern equipment and achieve a practical, real-world result. 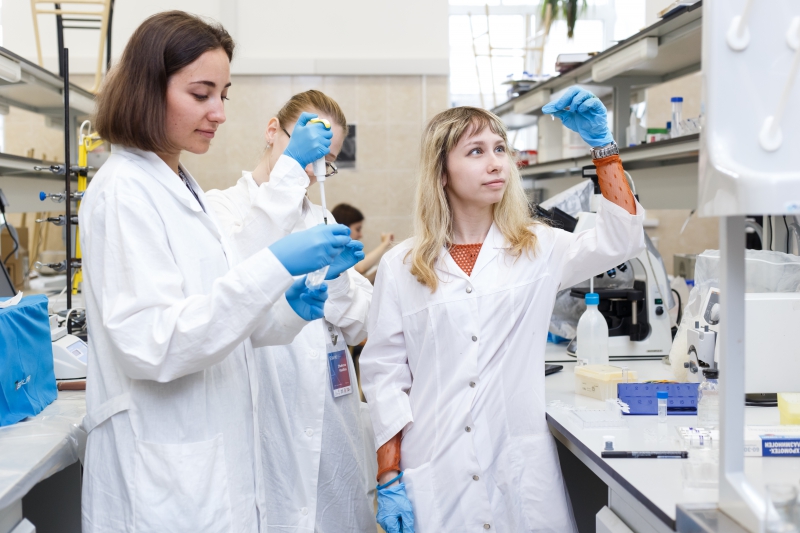 This summer marks the third time that SCAMT Workshop Week has been held at ITMO University. The course offers participants the opportunity to try their hand at a new field and deepen their knowledge in the research of their specialization. The program included lectures and workshops by the laboratory staff. For one, Ekaterina Skorb, the winner of last year’s L’OREAL – UNESCO “For Women in Science” contest, spoke about the infochemistry of adaptive systems, while Alexander Shtil, the organizer of Russia’s one and only experimental laboratory for systematic study of fundamental mechanisms of the operation of antitumor compounds, gave the participants an insight into the advantages and disadvantages of targeted medications.

But it was independent project work that constituted the majority of the activities at SCAMT Workshop Week. This year, the participants could choose from eight project topics, including such innovative ones as working with spider silk, DNA machines and nanostructured medications (you can learn more about the projects here).

What made this year’s edition of the course special was that all activities were conducted in English. According to Polina Khapaeva, director for the development of SCAMT ChemBio Cluster, this decision was prompted by the fact that the Cluster’s Master’s program is also taught in English, and the organizers’ ambition to advance the international outlook of the summer school. While last year, it was attended only by students from Russia and the CIS countries, the 2019 school attracted participants from Iran, China and Greece. This new feature, however, had no impact on the main objectives of SCAMT Workshop Week.

“We pursue several goals. The majority of universities, and not only in Russia, as we established, have problems with enabling the training on real-world equipment. The students tend to only be given access to the equipment later on in their studies: fourth year for Bachelor’s studies, and last semester for Master’s studies. This is caused either by the lack of equipment or by the lack of opportunities. SCAMT gives students the chance to do something real and with their own hands. From start to finish, their projects are conducted in laboratories: you synthesize something, you conduct practice-oriented research, you get a real-world result and then present it at the project defense. All this helps to achieve an understanding of how real projects are done. What’s more, the school works to increase student mobility. If we were to ask students where they’d want to go to do an internship, the most common answer we’d get would be abroad. No one’s really heard about any other major laboratories in Russia apart from Skolkovo. We at SCAMT want to demonstrate that it is perfectly possible to conduct exciting research in the vanguard of science in our country too,” notes Polina Khapaeva.

Another aim of the school is to show the participants that real science is not conducted alone. The organizers hope that the bonds the students make here at SCAMT will lead to future collaborations between the laboratories where they will go on to work as team leaders or other research staff. That is, the third objective of the school is to form student networks, including international ones should the participants leave to work elsewhere in the world.

The participants of the summer school shared with ITMO.NEWS about why they’d decided to attend, what they remembered apart from working on projects and how going beyond their usual scope of research helped them look on science from a new angle.

Getting to here from Greece wasn’t easy, but I’m glad that I came all the way: the experience I obtained here was definitely worth it. In my country, many research centers lack the resources for experiments and laboratories, and SCAMT provided me with an amazing experience of working with materials that are already being used in medicine. For example, my group conducted research on spider webs. We collected the material in a lab and tested different options for its application. When laid out in the right way, this material could be used for healing open body wounds. Thanks to the luminescent property of spider silk, we could even see the regeneration process in tissues in action.

I am a theoretical physicist by education, but I’m sure that science is a consequential and ongoing process. By pursuing physics, chemistry or biology, you can develop in a variety of projects and fields, and apply the expertise you obtain in the solution of problems relevant to all humankind. Same with the SCAMT summer school: on the one hand, we carried out our own projects, but all of them were connected to topical issues out there.

Having completed my Bachelor’s studies, I started considering the options for pursuing a Master’s degree, deciding on SCAMT in the end. Participation in the summer school is one of the ways to enroll, so I wrote a motivation letter and got accepted.

I was involved in a project on assembling DNA nanomachines. These are synthetic robots that are made of nucleotides capable of killing off cancer cells without harming the healthy ones. This technology is aimed at solving a known problem in cancer treatment, where chemotherapy destroys all cells, immune ones included. Right now, all scientists in the field are facing the task of developing a tool that would enable selective treatment of the illness. A lot of money is being invested, a lot of articles are being written, everyone is looking for ways to achieve this goal. Using DNA machines is one possible solution.

What surprised me at the SCAMT Laboratory was its unique work process. As a researcher, it is you who has to initiate all the activities. No one tells you what to do; you set your own goals and search for ways to reach them. The field we are working in is a relatively new one, there hasn’t been a lot written on the topic, which adds up to the necessity of independent thinking. This is a very creative work which differs from the regular procedure of how things are done at universities I got used to.

I was in the team that was allocated a project called “Managing a Microbial Community”, as part of which our team had to work with bacteria. There are several problems in this field, one of which is the creation of biofilms. They are very hard to cure with antibiotics because they represent reconstructable structures: the bacteria interact with each other and create radioresistivity as a result. The scientists at SCAMT are developing a method for destroying such biofilms by means of nanoparticles and antibiotics incubated in these nanoparticles. Propelled by a magnetic field, these particles penetrate into the biofilms and release the antibiotic treatment. Over the course of a week, we conducted related experiments by creating the biofilms and antibiotics-enriched nanoparticles.

Other participants from our group researched the impact of nanoparticles on the processes of bacterial conjugation, during which they pass on their genetic information. It turned out that the addition of nanoparticles leads to a significant increase in the level of conjugation, and our colleagues managed to explain this phenomenon.

Apart from the serious work, we also did a lot of fun science things. For example, we drew with bacteria producing fluorescent proteins on growth-supporting media. This is called microbial art. What we got were real pictures which you could see by lighting the medium with a lamp. This makes for a good exercise that allows you to practice the creation of microbial colonies.

Having a chemistry background, I intentionally applied for a project that was connected with biology. It was really important for me to obtain at least basic skills on bedding-out of microbial colonies and biologic manipulations. In my view, a future scientist should have knowledge and skills in many fields and also be ready to work in a team.

In the future, I plan to do a Master’s at SCAMT, hence I wanted to get a closer look at how the work process is organized, and to meet the staff and learn more about the research that they pursue here. If I was accepted, I would like to work in the field of nanopharma and targeted delivery of medications.

Participating in the SCAMT summer school means a lot to me. Firstly, this is the first time that I’ve visited St. Petersburg, which I really enjoyed. Secondly, the school is a great opportunity to work in a field that is completely different from your usual research profile. While my research back home in Beijing focuses on energy resources and inorganic materials, here I was able to explore the field of biochemistry. The team I was in studied different bionic devices.

The way I see it, SCAMT Workshop Week provides the participants with a very valuable experience that gives an understanding of science’s most cutting-edge fields. Experiments, and, above all, ideas is something that has always attracted me in the career of a scientist. In the modern world, it’s very important to have an interdisciplinary skill set that unites approached from a variety of fields. Partaking in the summer school prompted me to start thinking about new possible approaches to my own research focus, but I still have to decide on a specific direction to proceed in.

During my internship at the G. A. Krestov Institute of Solution Chemistry of the Russian Academy of Sciences, I conducted research in the field of medicine and improving of existing medications for the betterment of people’s lives. I really enjoyed this experience and, having graduated from university, I started looking for a place where I could apply my knowledge and build a career in science.

In the end, I chose SCAMT because of the opportunity to work with nanopharmaceuticals. In the course of the summer school, our team did a project on biofuel cells. If a person gets diagnosed with diabetes, they will have to conduct ongoing monitoring of the glucose levels in their blood. For that, they’ll have to use certain devices that feed off of energy. At the same time, the human body independently produces energy as a result of related chemical reactions. The solution developed by our group allows to transform the body’s energy into the electric kind which could be used for powering the devices. This removes the need to constantly carry chargers and batteries. Instead, a biofuel cell is implanted in the body, which represents a small beacon that powers all the devices necessary. As part of our project, we conducted in-depth studies into how it operates. For example, we carried out an experiment where we assembled the cell and monitored how it powered a lamp. With our own hands, we created a device that would make life easier for lots and lots of people out there.