University of the Future: Russian and British University Officials Discuss Trends in Education

This Thursday, ITMO University hosted a meeting of university officials from the UK and St. Petersburg, a follow-up to the First Forum of Rectors of Russian and British Universities that was held in Moscow. The key event of the day was a round table discussion on universities of the future. The participants talked about the best educational practices and ways to attract talent while discussing possible collaboration in the field of student academic mobility. 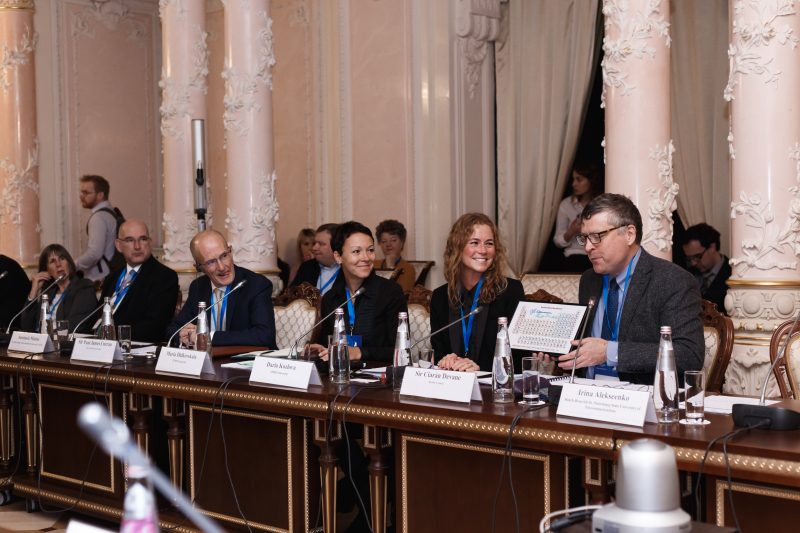 Meeting of university officials from the UK and St. Petersburg

Rectors, vice rectors and professors from over 50 universities gathered for the meeting in St. Petersburg. The British delegation included representatives of the British Council and the Embassy of the United Kingdom in Moscow, City University of London, and the Universities of Liverpool, Manchester, Exeter and Nottingham. Sir Martyn Poliakoff, a world-renowned scientist, popular science communicator, a Research Professor of Chemistry at the University of Nottingham, UK, the Vice President of the European Academies Science Advisory Council and a foreign member of the Russian Academy of Sciences, was a special guest at the event. Rectors and professors of the universities of St. Petersburg and the Komi Republic represented Russia at the meeting.
According to Sir Steve Smith, the Vice Chancellor and Chief Executive at the University of Exeter, Chair of UUK's International Strategic Advisory Board and the head of the British rectors delegation, this meeting was a logical follow-up to the First Forum of Rectors of Russian and British Universities in Moscow. Over 100 British and Russian university officials attended the event in the Russian capital.

“Our colleagues from the British Council are very interested in collaboration with St. Petersburg. And that was something we wished to underline from the onset: that Russia-UK relations do not only include the events held in Moscow. ITMO was a natural choice for our meeting. It was not only due to our already-established connections, but also because of the highly-rated achievements of the university’s top departments. It was necessary that we exchange our opinions on what became the key topics of our discussion,” he commented.

Daria Kozlova, ITMO University’s First Vice Rector, who moderated the discussion, welcomed the distinguished participants. She paid special attention to St. Petersburg being not only a city with a rich cultural background, but also the first national research center. It was here, in the Northern capital of Russia, that the Russian Academy of Sciences was founded, setting up a tradition of active scientific and educational development.
The city continues developing this tradition to this day with more than 70 higher education institutions operating in the city, four of which are national research universities, while three take part in Project 5-100. But what will the future of universities be like? Will education survive in its traditional form, and what is the role that higher education plays in the modern world?
Developing universities in a changing reality
As noted by Shearer West, the President and Vice-Chancellor of the University of Nottingham, on the one hand, centuries-old universities have to recognize their significance and take pride in it. Nowadays, however, with education becoming accessible from any part of the world and online-courses beginning to compete with traditional formats in terms of their range, many educational programs are becoming obsolete; technologies have modified the way humans interact. We should not, however, “bury” classical universities ahead of time.

“If we consider even the simplest data from economic and development organizations, it will be clear that education is in demand these days. Traditional university programs are still popular, but the demand for new, more diverse forms of higher education including life-long learning, online and mixed programs, is also rising. That is why, in my opinion, rumours of the death of education do not align with the evidence that we have. The world is changing and education is following suit. And, naturally, we should not forget the research function of universities; it is there that innovations are born and developed. Universities are cheaper in this sense than any other type of organization,” underlined Professor Shearer West.

For Sergey Bagnenko, the Rector of Pavlov First Saint Petersburg State Medical University, the university of the future is first and foremost a place with a unique atmosphere. Moreover, today's universities must already begin to attract leaders: the best specialists that can create excellent educational products and show their leadership through action.
Sir Martyn Poliakoff noted that it was important to value and preserve each university’s identity and diversity.

“I think there is a danger of all of the universities in the world becoming the same. We can draw an analogy to populations in the wild: genetic homogeneity is a cause of various diseases. I also want to point out the importance of each university offering a wide range of disciplines in their native languages. Obviously, it is great when everyone, like we all here, is in perfect command of their English skills. But if you think only in English, you lose your actual creativity – and this trait is key in international collaborations. We have to bring together people whose opinions differ,” he said.

“The meeting demonstrated that our British colleagues are open for collaboration. And this, for me, is the main takeaway. We learned that we see eye to eye on many topics. Our discussion today was a great opportunity to see how we can interact in the future. It is important to underline that our students are also open to this, and we have all the tools for collaboration,” commented Daria Kozlova.

Sir Steve Smith also indicated the need to continue communicating and looking for ways to collaborate in the future.

“We had an interesting discussion today and managed to touch upon a wide range of topics: from education of the future to academic exchange programs. For the UK side the main takeaway is that we have to work together, as the best educational programs are usually created at the international level. It was not for small talk that we came here today, but to continue our dialogue. That was also why we invited Russian rectors to visit London next year. This meeting is scheduled for June, when we will continue working together in many fields that have to do with academic exchange and research collaborations,” he concluded.

Research by Russian and British scientists
The meeting at ITMO also included a pitch-session during which the university’s professors presented their work and talked about their experience of collaborating with scientists from the UK. For instance, Ekaterina Skorb, a professor of ITMO University’s ChemoBio Cluster, with experience of working at the Max Planck Institute of Colloids and Interfaces as well as Harvard University, discussed research in the field of artificial cells.
She also shared her thoughts on the latest collaboration of ITMO University with the University of Liverpool, the workshop for 30 young scientists she organized together with Professor Dmitry Shchukin in October. Over three days at the workshop, they discussed their experiences in scientific research and managed to come up with new interdisciplinary collaborations.
Furthermore, Pavel Belov, the Dean of Faculty of Physics and Engineering, Ivan Iorsh,a researcher at the Faculty of Physics and Engineering and head of ITMO University’s International Laboratory of Photoprocesses in Mesoscopic Systems, Sergey Kolyubin, Head of International Laboratory of Biomechatronics and Energy-Efficient Robotics, and Alexandre Nominé, a French materials scientist currently conducting research at ITMO, talked about their work and their current international projects.
During the meeting, the participants discussed collaboration on short-term educational programs, for instance the possibility of attracting British students to ITMO’s summer schools held in English as well as a special Russian language summer school.
Alexandre Nominé and the specialists of ITMO’s International Educational Programs Department discussed the possibilities of trilateral collaboration between Russia, France and the UK within the framework of the Erasmus+ grant program, which would finance academic exchange and research cooperation initiatives between the three countries.
Back to top