The application is open for first year students of ITMO’s Master’s program in Robotics. Those accepted will join the teams working in the fields of control systems and machine learning, computer vision, engineering and human-machine interface development. Read on to learn more. 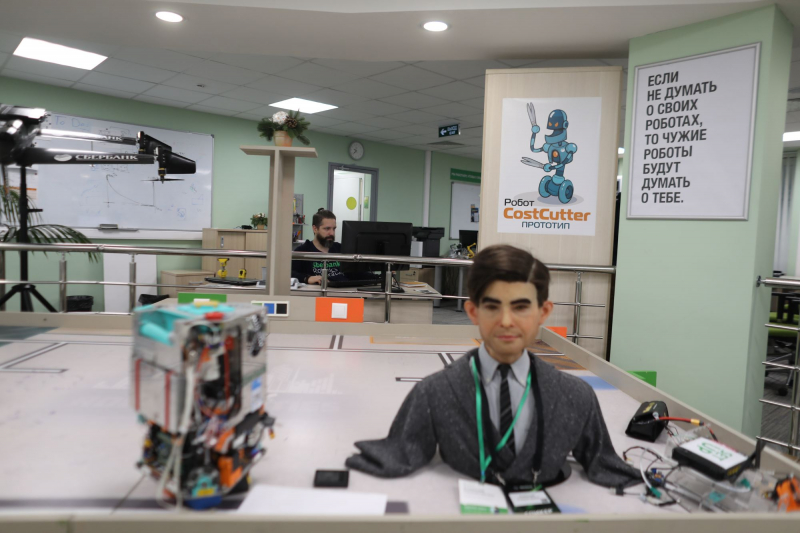 ITMO University and Sberbank Robotics Laboratory have announced the second round of applications to the Robotics program for students willing to participate in research and experimental design projects.

“Together with Sberbank Robotics Laboratory we have determined a number of research fields that are interesting both to Sberbank and ITMO University,” says Sergey Kolyubin, head of International Laboratory of Biomechatronics and Energy-Efficient Robotics. “We assemble student teams in these fields. Later, they will have an opportunity to be employed at ITMO University’s lab. They are paid competitive wages, especially useful when combining your work and studies. Moreover, our Master’s students can complete their theses on the topics they are working on in their teams.”

Three groups of Master’s students who were selected in February 2020 are currently working in the field of Robotics within the framework of this collaboration with Sberbank. The first team’s fields are motion planning, object manipulation and computer vision. Master’s students in the second team deal with hardware: they create dexterous and reliable robotic palms for anthropomorphic robots. The third team specializes in speech user interfaces.

“The work of the teams is based on overcoming the scientific and technological barriers faced by researchers all over the world,” continues Sergey Kolyubin.

The first problem to combat is what is known as catastrophic forgetting in neural networks. With this approach, the robot can either learn new things fast while forgetting the old ones or can remember, say, classes of objects, for a long time, but has a weaker ability to learn or adapt to new things.

The second problem is memory burn. For instance, to plan trajectories of manipulators in a crowded and dynamically changing environment, you would need to provide substantial amounts of apriori information and sometimes colossal amounts of RAM. We want to cut down on these amounts by keeping the solutions we equip our algorithms with as close to the optimum as possible.

“If we’re talking about hardware, then we’re combining anthropomorphism and adaptivity of manipulators with reliability and strength, which is only possible with close integration of mechanics, electronics and controlling algorithmics. By working with human-machine interfaces we’re trying to teach robots to hold a conversation taking into account their physical surroundings and context to get to the next level of what the chatbots are capable of today. In general, both our partners and us consider it interesting to study new ways of remote and contact human-machine interaction as well as deeply understand the limitations of the known ones,” he adds.

However, interests of ITMO and Sberbank aren’t limited to these topics.

“There are at least two research areas that are interesting for both Sberbank and ITMO but they haven’t been launched yet as the teams for them haven’t been assembled,” continues Sergey Kolyubin. “The first one has to do with autonomous movement and unmanned ground vehicles, and the second one is about designing neuromorphic systems that would allow robots to evaluate their own state (proprioception) and their surroundings (exteroception). That’s why we can’t say that with the new wave of applications new teams won’t be formed around these two areas. There’s also a chance that a new star topic will appear that would lead us to develop a new research area.”

The projects that the Master’s students are working on as part of Sberbank collaboration are based on the Italian anthropomorphic robot iCub. This allows the participants to get experience with one of the contemporary robotics platforms.

“iCub is used by top European universities,” says Sergey Kolyubin. “Working with it allows our students to enter a wide international developer community around this platform. As far as I know, there is only one such robot in Russia, and thanks to this collaboration with Sberbank, our Master’s students now have access to it. They are also using the best software that enables them to solve tasks at the cutting edge of science.”

As noted by the organizers, every project is developed with practical cases in mind, so that each of them has potential for further use. Successful developments created as part of these projects can turn into commercial products.

“At the start, it can be entertainment robots, like a bartender that can make you a cocktail while also holding a conversation – that’s a rather original task from the point of view of the necessary technological stack,” expounds Sergey Kolyubin. “Or it can be some more down-to-earth cases. If in the process of work we understand that we have ideas that can be interesting for companies, including those from Sberbank’s ecosystem, then there’s an open opportunity for commercialization. Moreover, our students have a chance to demonstrate their abilities. We don’t bind our participants by any employment liabilities after their studies but if that is how they find their dream job then why not?”

Master’s students who entered the program in Robotics in 2020 are welcome to take part in the selection. Each participant will have to complete a test assignment – that includes skills in C++ or Python as well as Robot Operating Systems (ROS). A potential candidate must also have basic knowledge of robot kinematics and the essentials of their control and movement. Experience of working in ROS/Gazebo will be an advantage.

To apply, you need to email at s.kolyubin@itmo.ru with the subject line “Robotics ITMO-Sberbank”. As a reply, the candidate will get more detailed information about potential project topics and the test assignment that would evaluate their technical level, the abilities to learn and manage their time.

According to Sergey Kolyubin, the task doesn’t require deep scientific knowledge but it does have a deadline. After completing the task, the candidate will need to send it in together with a letter of motivation, where they explain which area they are interested in and what kind of a product they want to create.

The candidates who have successfully completed the test assignment and written a sensible letter of motivation will take part in an interview that will be held by representatives of ITMO and Sberbank Robotics Laboratory.

The applications will be accepted until the middle of September. Students who have passed the selection process will work at ITMO’s International Laboratory of Biomechatronics and Energy-Efficient Robotics. The project includes internships at Sberbank Robotics Laboratory in Moscow and the iCub developer lab in Italy once the epidemiological situation allows it.