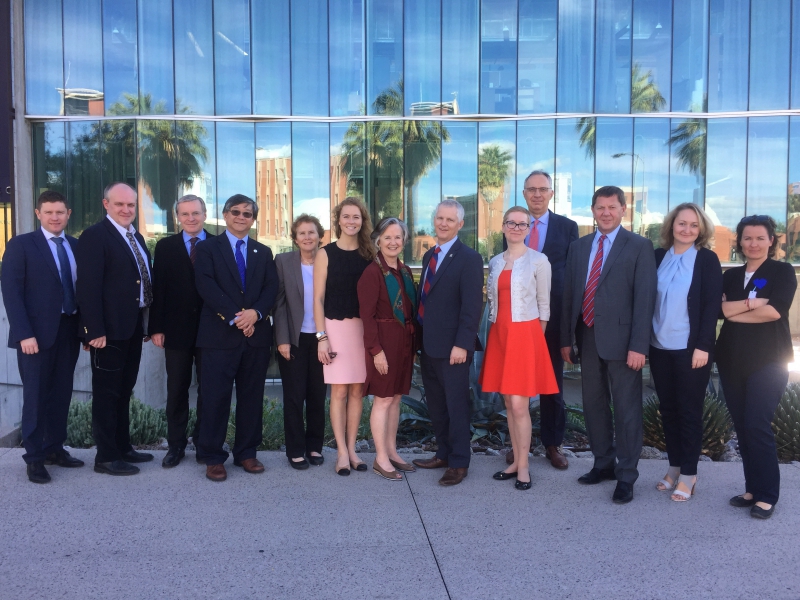 The International Council was first formed in 2014 to assist the University in its strategic planning. Its experts monitor the University’s progress in the international academic and educational community, and provide valuable advice.

“The International Council continues to meet on a regular basis; this is now the 7th meeting. During our last meeting in June we discussed our strategies for the next few years and, in this most recent meeting, we explored them in more detail. The Council’s members provide us with a high quality of expertise, which we are grateful for,” shared Daria Kozlova, ITMO’s First Vice Rector.

As the meeting was held on the campus of the University of Arizona (UA), it offered an excellent opportunity for ITMO’s representatives and the members of the Council to learn from and see first-hand some of the most current trends and experiences from one of the leading universities in the United States. The pre-meetings that were held explored research ethics, quality assurance in education and the role of alumni in supporting the university, with representatives from the UA presenting their experiences. Among the various methods of quality assurance in education that were discussed are the nine collaborative learning spaces currently being used at the University of Arizona to foster more interaction among students and teachers. It was found that the redesign of classrooms contributed to more active learning amongst the students, and all participants of the meeting had the opportunity to visit these rooms.

The official meeting of the International Council with some of ITMO’s representatives was held on the 8th of November. The main themes of discussion were ITMO University’s roadmap for 2018-2020, transformation of education at the university, ITMO’s new Highpark campus and shared spaces, services, education and research. “The seventh meeting of the ITMO International Council was both rewarding and productive. Council members were delighted to see the huge progress that ITMO has made on its innovation agenda as it continues to chart a new direction for Russian universities. There was a particularly rich discussion of how ITMO understands its mission and will be able to execute on it even more fully through the new High Park campus,” shared Professor Debra Stewart, Chairman of the International Council and President Emerita and Senior Scholar, Council of Graduate Schools in the USA.

Andrew Comrie, Senior Vice President for Academic Affairs & Provost Professor at the University of Arizona commented on how ITMO’s hip and modern focus on the students and technology makes it distinct from other universities of Russia, and how it is possibly the only university in the world with “love” in its value statement. Kathryn Atchison, former Vice Provost of new collaborative initiatives at UCLA, described how ITMO’s success in ACM ICPC is not only due to its brilliant students but also to the educational expertise of those who train them. She encouraged the University’s management to analyse the methods and approaches used to train these students to help contribute to the quality of education overall.

There was also discussion about plans to use ITMO’s strengths in IT and Big Data for quality assurance in education, and some of the experiences around the world were shared in this respect. Visiting the Optical Sciences Building at the University of Arizona.

Regarding ITMO Highpark, the new campus that is set to be built in the south of St. Petersburg, the members of the Council commented that it was an excellent initiative and that ITMO’s combination of education, research and market-oriented innovation with leading partner companies from around the world at its side is not only a huge step forward for the university, but also for Russia itself.

The next meeting will be held in St. Petersburg in the Spring of 2018.