This weekend, ITMO University’s International Council has gathered for its 11th session in the buzzing city of Tel Aviv, Israel. The members exchanged their opinions and expertise in discussing the meeting’s keynote topic, “Towards ITMO’s 2021-2027 Roadmap”, explored the ways of attracting new talents into the University’s distinguished academic staff, and made a visit to one of ITMO’s partner institutions in Israel, Ben Gurion University of the Negev, as part of the event’s vibrant cultural program. 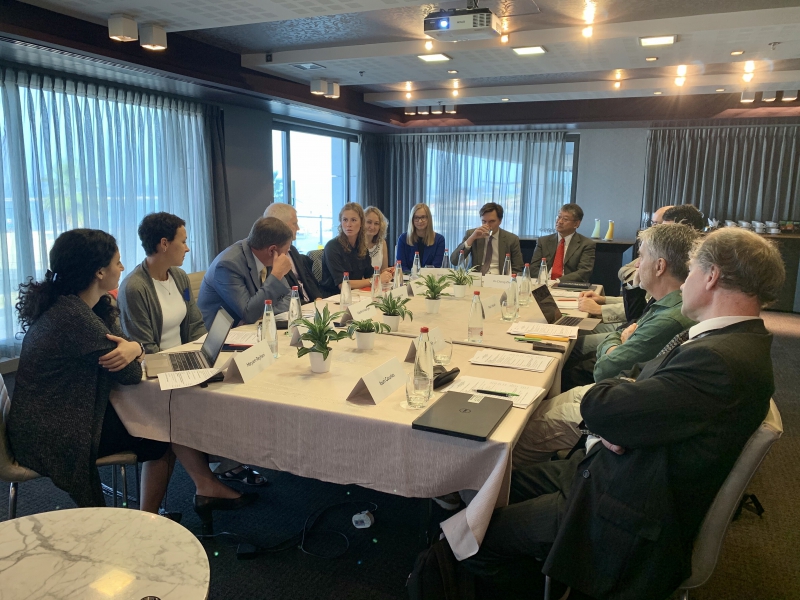 Established in 2014 as part of the University’s innovative new approach to strategic governance, the International Council provides ITMO’s administration with broad-based advice on enhancing the University’s competitive position on the world’s leading-edge education and research scene. Comprising the Council are renowned international experts who convene twice a year to pool their extensive experience for helping to propel ITMO forward on its development and internationalization path.

The meeting, which also featured other members of ITMO’s strategic staff including Marianna Chistyakova, Head of the Strategic Development Department, and Vladislav Bougrov, Head of the School of Photonics, was held under the banner of “Towards ITMO’s 2021-2027 Roadmap”. The participants focused on all things development and progress, and explored issues related to the implementation of ITMO’s recent presentation for the 5-100 Russian Academic Excellence Project. With ITMO setting its sights on making a breakthrough into the world’s top-100 universities by 2027, the members also weighed up the ways of achieving this milestone goal.

“The International Council was impressed, yet again, with the exciting changes happening at ITMO. The quality of its programs and achievements has contributed to higher rankings for the University, even in the last six months. This Council meeting included vigorous and open discussions about how to advance ITMO yet further in international rankings, and also how to attract and retain the best faculty members from around the world,” commented Council member Andrew Comrie.

Another topic on the table was attracting new talents to enrich the University’s academic staff. Exchanging their opinions on the matter, the Council members encouraged the ITMO administration to look into boosting the starting package offered to new employees. Summer schools and conferences were also proposed as an excellent way to give potential international professors and researchers the opportunity to first-hand experience life in St. Petersburg before they would take the big leap of relocating to the city. Also suggested was the option of approaching the large number of talented scientists with Russian origins around the world, who may find it easier to adapt to such a move. However, when it comes to bringing in the world’s top professors in ITMO’s areas of expertise, the International Council members emphasized the need to take on a systematic approach, identifying key candidates and connecting with them on an individual basis.

In other points covered, Vladislav Bougrov updated the Council members on ITMO’s new and improved PhD system, touching on aspects of the procedure and structure of how the University awards its own PhDs, a measure it was allowed to introduce alongside only a few selected educational organizations following a special decree by the Russian government. There was also a lively discussion on how to effectively support ITMO University’s PhD students during their studies.

But it wasn’t all work and no play for the Council members, who as part of their 11th session also partook in a vibrant events program, including a short trip to the multiculturally important holy city of Jerusalem.

“I never thought that being part of the ITMO International Council would be such a spiritual endeavor,” quipped Council member Peter Sloot.

In the lead-up to the main meeting on November 9, several ITMO University staff and International Council members also visited the vast and welcoming campus of Ben Gurion University of the Negev (BGU), one of ITMO’s international partners, and crossed the bridge to tour through the nearby Ben-Gurion Advanced Technologies Park, a state-of-the-art tech hub slated to become Israel’s most exciting new business and innovation center BGU helped to establish.

At their last meeting, which took place this June, the International Council members explored a wide range of topics under the umbrella of “Entrepreneurship and Tech Transfer”, one of ITMO’s pioneering priority areas. The next International Council meeting is set to be held in ITMO’s home city of St. Petersburg in the summer of next year.