6th International Council Meeting: Looking at the Map of the Future Together 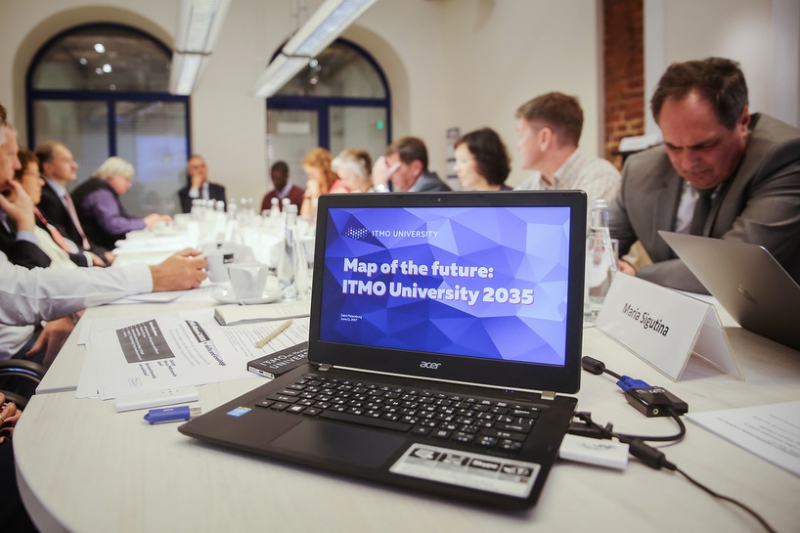 A recent strategic session held exactly a month before the International Council meeting brought together over 70 faculty, administrative staff and students who put together ITMO University’s strategy and vision for 2035 in the priority areas of development. This extraordinary team effort to put together a vision for the university from many different perspectives greatly informed the discussion at the International Council meeting and continued the conversation about ITMO’s future. These discussions both within the university and with external experts will then form the basis of the 5-100 Roadmap for 2018-2020. One of the special features of this Council meeting was that for the first time working group meetings were held for two days preceding the meeting. These working groups included representatives from the University and International Council members, concentrating on critical aspects of ITMO University’s Development: Education, Research, University Management and International Activities. These spaces gave an opportunity to analyze current processes at the University and generate ideas based on experience around the world. The discussions during these pre-meetings were lively, and the questioned discussed were important and relevant. Thus during the council meeting itself, the conversation was more efficient and focused on how to concretely implement these ideas at ITMO University.

The International Council members discussed necessary and anticipated changes in education: individual learning trajectories, study modules, flexibility, variety of programs and paths to choose from. A personalized approach is the key philosophy behind major changes in the educational process to come. The discussion about research looked at the importance of quality rather than quantity and also about the need for interdisciplinary projects, a common practice in other universities, where scientists from various backgrounds work together addressing a big global challenge.

The need for more internationally-minded researchers here at ITMO was also expressed with a view to further develop the Fellowship/Professorship program to fulfill this need.

Finally, work with alumni, and the vision of ITMO.Family and its future were given more thought.

The next International Council meeting will be held in the University of Arizona in 7-8 November 2017.