The 14th session of ITMO University’s International Council took place on June 21 via a Zoom call that brought together council members from Australia, Asia, Europe, and North America. It focused on new approaches to defining top-level education, research, and an inspiring environment that would ensure ITMO’s leadership position in the future. 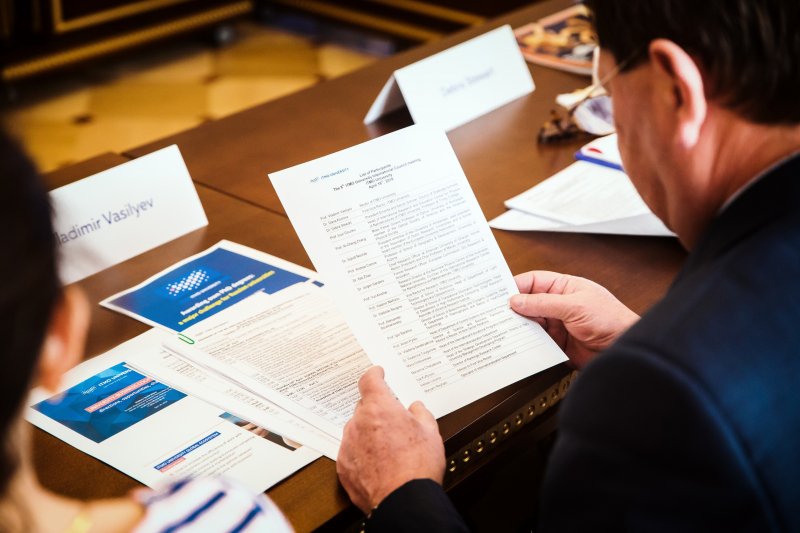 At a session of the International Council in 2018

What makes a top-level university? Members of ITMO’s International Council were invited to explore this concept and its various applications as ITMO navigates the rapidly changing educational environment of the post-pandemic world.

ITMO finds itself well-positioned in the current situation because it “was actively engaged in preparing for the future with the most effective use of technology before the pandemic struck”, commented Dr. Debra Stewart, the council chair and a senior fellow at NORC at the University of Chicago. But the urgency hasn’t subsided.

“The world around ITMO is changing. The pandemic has accelerated the pace of innovation, and we need to incorporate the changes that are happening,” Dr. Stewart said. “It’s a race and you never stop running.”

In his update to the council, ITMO University Rector Vladimir Vasilyev highlighted several programs and initiatives currently taking place. Since the university returned to on-site learning in February of 2021, rapid changes have occurred in regard to modes of instruction. The best practices were recognized in a competition held in spring of 2021 and the current trends and challenges were discussed during ITMO.OPEN: Educational Practices, a conference for teaching and administrative staff from universities across Russia.

On the research side, ITMO has been working on a quantum communications network between St. Petersburg and Moscow, the second-longest in the world. This summer, the university opened a nationwide PI School for young scientists. The university is also currently working on four major national projects in the fields of genetic technology, synchrotron radiation, molecular engineering in life sciences, and AI. And last but not least, the university’s new high tech campus ITMO Highpark is scheduled to break ground in mid-September, with completion of the first stage slated for late 2023.

When asked to share their take on post-pandemic tertiary education, several council members noted the increasing importance of cross- and interdisciplinary engagement. Dr. Peter M.A. Sloot, a distinguished research professor at the University of Amsterdam and director of the Complexity Institute at NTU (Singapore), noted:

“What we’re seeing at the University of Amsterdam is a landslide in interest in interdisciplinary research. The students observe that everything is connected to everything, which requires new ways of guiding them.”

Dr. Stewart, too, stressed this point and added that she has been seeing a dramatic increase in interest in interdisciplinary studies with social impact across all fields. ITMO could play a unique role in nurturing interdisciplinary research and tying it to real-world impact.

Building on this concept, Dr. Sijbolt Noorda, president emeritus of the University of Amsterdam, noted that for this approach to be successful, lecturers have to be interdisciplinary, too. He also pointed to the importance of not letting the pandemic define ITMO’s development strategy and instead focusing on bringing the same degree of flexibility, resilience, and innovation as demonstrated by ITMO in 2020 to solving a variety of other challenges.

Considering the increasing availability of educational programs, council members explored the concept of micro-credentialing and providing platforms and mechanisms, including a digital wallet, that would give students more agency in maintaining a record of their academic performance. ITMO could lead the conversation about this potentially in-demand development.

Another promising niche for ITMO emerged during a discussion of top-level research and what it would take for ITMO to reach a TRL of 7-8 – technology readiness levels that indicate mature technologies ready for market integration. Historically, universities have been involved in basic-to-applied research but are rarely involved in the later product development stages, which are usually carried out by the industry. But with its tech expertise, ITMO could be in a unique position to achieve this goal; and ITMO Highpark could provide an ecosystem that brings together early-level research and investment from tech firms.

This unique setup could also open new avenues for introducing a “humanizing” aspect into science, as bringing products to market would require a deeper understanding of emotional and communication aspects. This could lead to an entirely new research area for ITMO, suggested Dr. Sloot. “You don’t have to create products on that level, but you can do research that will help get products on that level,” he said.

Andrew Comrie, professor and associate director at the School of Geography & Development at the University of Arizona, suggested taking this idea to the next level and using it as a blueprint for ITMO’s “industry school” of sorts that would focus on the non-technical parts of research and business. Dr. Sloot suggested building an executive program in which industry leaders could learn about the connections that exist between technology and humanities, social sciences, and psychological-cognitive sciences. It could also be a good source of new projects and industrial connections.

As the university explores new ways to be a driving force for education and research, the council members agree that attracting talented students and giving them more agency remains key.

“You have such a beautiful tradition in recent years of attracting and raising young talent,” Dr. Noorda said. “Please trust them, help them develop their lives, and you’ll be the winner.”

Established in 2014 as part of the University’s innovative new approach to strategic governance, the International Council provides ITMO’s administration with broad-based advice on enhancing the University’s position on the global education and research scene. The next meeting of the council is scheduled to take place in November 2021 in Dubai.