For the first time since 2019, ITMO University’s International Council met in person on November 12 in Dubai, UAE, to discuss the university’s plans for 2030 and once again find inspiration and insight through engaging face-to-face discussions. 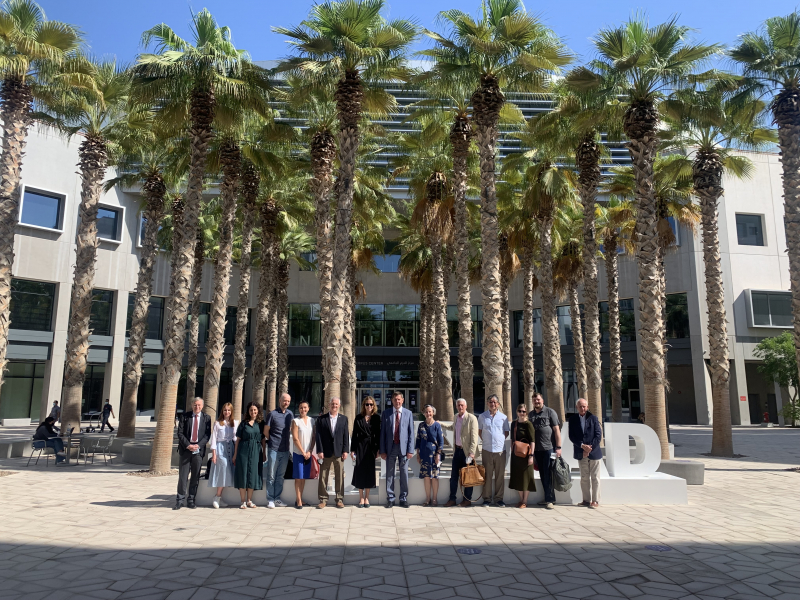 The excitement was palpable as members of ITMO University’s International Council finally were able to travel internationally and come together after a long break in the United Arab Emirates.

Before diving into the meeting, the members had a chance to visit New York University Abu Dhabi and meet with its Vice Chancellor Mariët Westermann, who arranged for the members and ITMO University representatives to be shown around the beautiful campus with a strong international vibe.

It was, perhaps, particularly fitting that the future of ITMO was discussed at such a future-oriented location as Dubai. Under the main theme of University Education 2030, the meeting featured presentations by Aleksandr Maiatin on a five-year forecast of the future of university education through the prism of IT, the role of humanities in a technical university for 2030 by Antonina Puchkovskaia, as well as the future of engineering education by Andrey Bogdanov.

Among the issues explored during the meeting were approaches for implementing the University’s 2030 Development Strategy, presented last month. The Strategy is rooted in Priority 2030, a national strategic academic leadership program with a mission to develop over a hundred Russian universities into the centers of the country’s scientific, technological and socio-economic development. ITMO University was named among the top finalists of this program and is scheduled to receive nearly 1 billion rubles in funding.

A key element of the Strategy is the concept of a network-centered university where a consortium of organizations and entities share ITMO University’s values and together pursue educational and research goals, a model that is completely new to Russia. The discussion with the Council was an important step in its development.

“The International Council was challenged to help ITMO envision major forces shaping higher education in 2030,” commented Debra Stewart, the council chair and a senior fellow at NORC at the University of Chicago. “Spurred by the dynamic and ambitions plans proposed by ITMO leadership, the International Council members suggested a variety of trends likely to influence ITMO’s capacity to achieve its very bold and compelling vision.”

Stewart noted that whether meeting face to face in Dubai or joining virtually from as far away as China and Australia, the International Council members remain impressed by the energy and commitment of ITMO leadership to advance ITMO University as a leading global university by 2030.

The plan to move forward through building out a sophisticated network of relationships with key stakeholders is a particularly promising strategy, she said, likely to ensure success in achieving this objective.

Andrew Comrie, professor and director at the School of Geography & Development at the University of Arizona, was very pleased with the meeting. He commented: “The International Council and ITMO leadership participated in excellent discussions of the challenges and opportunities for ITMO. Our discussions of the University in 2030, the digital arts and humanities, and also of the future of engineering education were especially stimulating, engaging, and informative.”

Established in 2014 as part of the University’s innovative new approach to strategic governance, the International Council provides ITMO’s administration with broad-based advice on enhancing the University’s position on the global education and research scene. The next meeting of the council is planned for June.